Brew Ah-Ha: Hearth’s David Flaherty is Ready to Pit His Beer Menu Against the Wine List

One man’s quest to convince pappardelle eaters to order not a glass of Barolo but a bottle of beer. 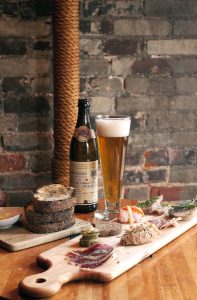 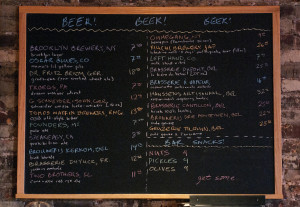 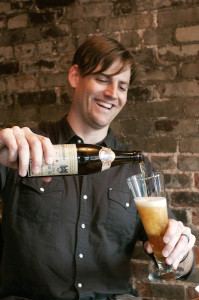 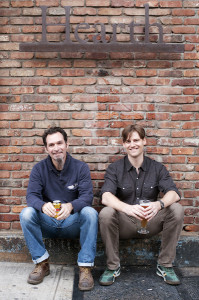 EAST VILLAGE—There are certain sounds one expects to hear at very nice restaurants: the quiet clang of heavy silverware on porcelain; the skloot of chair leg on hardwood; the soft pop of a cork leaving a bottle of aggressively priced Meursault. Those you will hear at Hearth, Marco Canora’s high-end East Village take on Italian cucina povera, which opened in 2003 and continues to be a fine-dining beacon even as the neighborhood glows brighter and brighter with Michelin stars, or at least Bib Gourmands.But a keenly attuned ear might hear another sound during dinner service at Hearth: the bipartite sound of a beer can opening. It’s a distinctive sforzando tsk followed by profundo shloop. And it’s as unexpected here as a subway rumble in an Iowa cornfield.

Beer: No drink looms larger in the national psyche. It’s the beverage of the American man, the password for working class. It’s what Obama drinks when he’s campaigning and what Romney couldn’t drink and therefore lost.

But it’s a rarity in fine dining, where wine—and even more so, the pageantry surrounding it—is the semiotic indicator of sophistication. One needn’t understand what’s in the bottle to feel the surge of endorphins upon ordering a high-priced bottle of it.

If you walk into Hearth on any given night, 24 of the 27 tables will probably be drinking wine. Paul Grieco, the Mephistophelian sommelier whose wine empire now encompasses six Terroir wine bars and the mothership he co-owns with Canora, Hearth, pours some of the most far-out counterintuitive and yet consistently brilliant wines on any list in the world. Pages and pages of wines, replete with context, wordplay and typefaces in various sizes, reinforce Grieco’s legendary erudition. In fact, it’s fair to say only the foolish visit Hearth and don’t drink the wine. But New York City is as full of fools as a Shakespearean play and, as in a Shakespearean play, sometimes they get it exactly right.

For the beer at Hearth isn’t just merely-there beer, like stage-chattering extras in the background. These beers are curated—with as much erudition as Grieco’s wines—by an affable 36-year-old named David Flaherty, Hearth’s dedicated beer director. Under Flaherty’s purview are 167 beers, each with a backstory and a head of its own. It is Flaherty’s job not only to select these brews but to champion them—and beer overall, the underdog of fine-dining beverages.

On any given evening, Flaherty might swoop, sommelier-style, next to a particularly adventurous two-top, beer can in hand or bottle behind the back. “I notice you’ve ordered the pan roasted Chatham cod with smoked chickpeas, black cabbage, garlic confit” he might say, a glint in his eye. “That would go very well with the Grodziskie. It’s a sour smoked-wheat ale from Germany. The subtle smoke in the beer mirrors the roasted flavors and the smoke in the chickpeas. The sourness cuts through the richness like a knife, making all the flavors pop.”

Flaherty, a former Shakespearean actor, can read the house. If his audience seems diffident, he shall alight. If, however, their interest is manifest, he may turn his few lines into a three-minute soliloquy on how the brewer, professor Dr. Fritz Briem, teaches brewing technology at the prestigious Siebel Institute of Technology in Munich, a university founded in 1895, and how he seeks to re-create the classic beer recipes of yesteryear and how this particular recipe for Grodziskie is similar, if not identical, to beer drunk in the 1900s in East Prussia and, furthermore, how it is created according to German Purity Laws—inserting discretely and, judging the couple, a World War II reference here—that stipulate that beer be made of three things (those three things being water, barley and hops) and wow isn’t that neat? By the end, the couple, dazzled and slightly moist from the exertion of following Flaherty’s train, is sold not only on that beer in particular but on beer in general. And then tsk-shloop, glug, glug. Ahhhhh! Exit Flaherty.

“When I look at beer,” Flaherty says after his shift, sipping a Jolly Pumpkin Artisan Ale at a bourgeois East Village craft beer bar called Proletariat, “I see geology, geography, sociology. I see the stories of the brewmaster and of the brewery. I see their passions and their faults. Those are the stories I want to tell.” Flaherty doesn’t see the world through a bottom of a beer glass. He sees the world inside it.

In many ways, beer is simply the incidental vessel through which Flaherty tells stories. He’s always been a storyteller; beer happened to be close at hand at a particularly formative moment. Flaherty grew up in Fort Collins, Colorado, in the shadow of the Odell brewery, a legendary pioneer of the microbrew movement. “I was exposed to craft beer at about age 15,” he confesses. “Beer was everywhere where I grew up.”

But beer was a winter romance for the young man. The theater—that has three syllables, btw—was his first love. Though hailing from a long line of engineers and accountants, Flaherty discovered acting as a teenager and by age 18 was studying the craft at University of Northern Colorado in Greeley. “I discovered what I love,” says Flaherty, “the sense of play, the collaboration, the storytelling.”

Flaherty met with success, moved to Manhattan to attend NYU’s prestigious graduate program and, in 2003, was cast as the Earl of Gloucester in the Shakespeare in the Park production of Henry V. But like so many other young actors, he spent years cobbling together paid work in the restaurant world, including stints pouring fake booze at a Midtown mafia joint, selling bottles at a Brooklyn Heights wine store and entertaining finance men in theatrical wine seminars. Five years ago Flaherty landed at Hearth.

He began as an executive assistant, the restaurant equivalent of being a ball boy. But he fetched fouls for the almighty Grieco and, there at the feet of a master, he learned. “If Paul was a vacuum cleaner salesman, I’d still work for him,” Flaherty says.

Flaherty slowly ascended the restaurant’s ranks, eventually becoming a manager and, when a wine director left, he went for the position but was passed over. Grieco gave him the beer list as something of a consolation prize. But it suited him just fine. “Paul is great because he gives you a stage for your passion. And beer,” he says, “is my first love.”

The list began as a page but, three weeks after Flaherty took it on, it had swelled to include 27 selections from Oskar Blues Dale’s Pale Ale to Pinkus Müller’s Organic Ur Pils. Flaherty scoured Web sites, devoured books, talked to friends, chatted with distributors to find beers sufficiently complex and captivating to complement Canora’s cuisine—and compete with Grieco’s wine list. Beers like the Grodziskie or a hefeweizen from G. Schneider & Sohn, a boutique brewery in Kelheim, Germany. The more he learned about the state of American beer, the more Flaherty bemoaned the lack of variety—pissy American lager being preponderant among the Big Four—and so Flaherty set about making the beer list at Hearth into an argument for the drink’s legitimacy. Today the list includes craft ales from small brewers like 21st Amendment from San Francisco and Cain and Ebel Red from Two Brothers Brewery in Warrenville, Illinois.

“We haven’t yet come to the point where beer has become respectable,” Flaherty says happily, “and I like that: There’s more preconceptions to work against.”

And beer’s accessibility, which always seems the inverse of respectability, appealed to Flaherty in more ways that one. To make wine, he says, “you need to be close to the grapes. With beer, all you need is access to water, hops, yeast and barley. You can make it anywhere.” Flaherty, in fact, began brewing in his Astoria apartment. “Making wine is like being a farmer,” he says. “Making beer is like being a chef.”

Last March, Flaherty and Grieco went head to head in an epic dinner entitled, in typically verbose Hearthian fashion, “Beer v. Wine Dinner: A Cage Match of Matching Abilities.” Over five courses, the men laid their claims. For the first course, beef tartare, served with a quail egg. Grieco served a wild wine from Mt. Etna. Flaherty served a Pikeland Pils from the Sly Fox brewery in Pottstown. The course was a draw. But at the second course, Flaherty made his move. “I had the trump card,” he explains. As Canora served up an Italianate riff on shrimp and grits (Mayan prawn, soffrito, pepperoncini and Anson Mills polenta), Grieco put forth an upstate riesling, and Flaherty poured a Green Chili Saison from an obscure outfit called the 5D Brewery Company.

“I said, ‘Paul, where did your wine come from?’” recalled Flaherty. Grieco answered that it was from the Finger Lakes region. “And I said, ‘Well, I made this beer in my apartment.’”

And then there was another sound, not often heard in fine dining: applause. Tsk-shloop. Ahhh. Exeunt omnes.