A family business frozen in time. 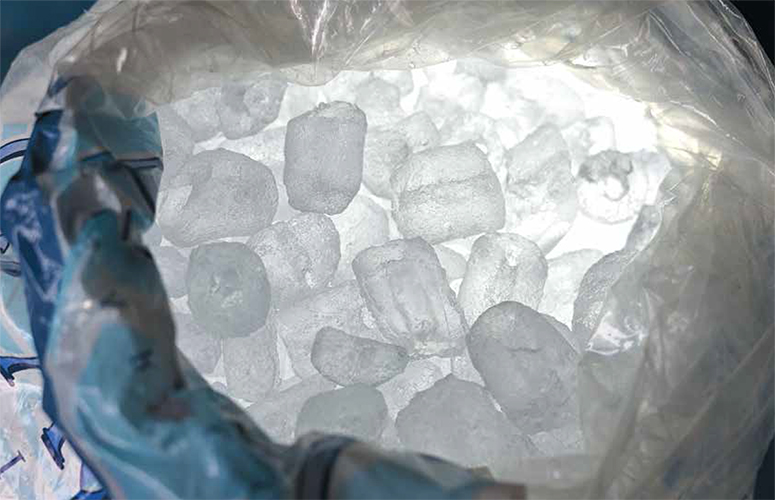 If you ask David Palmadessa to tell you the story of United City Ice Cube, the fourth-generation business he runs with his brother Donald from a very tiny storefront on West 45th Street, he’ll tell you that you’re too late. “All the people you want to talk to,” he says, “are long dead.”

He’s referring to a long line of Palmadessas. First was his great-grandfather, an Italian immigrant who started the Hell’s Kitchen business in the early 1900s—back when ice was delivered to tenement kitchens by horse-drawn cart and came in 100-pound “cakes” that burly men would hoist onto their backs with the help of metal tongs.

Then there was his grandmother, who ran the business from her railroad apartment on 39th Street. His father, Donald, went in 2007, just two years after his uncle “Paulie,” an unmarried ladies’ man and neighborhood character whose passing—he died of a heart attack loading an ice truck—prompted a profile in the Times.(“Mr. Palmadessa’s distinctive voice preceded him,” the author wrote. “It was high-pitched and scratchy and full of Italian street attitude, like Joe Pesci in mid-riff.”)

They are all immortalized on the bulletin board of battered, faded photos that serves as the hall of memories at United City, whose Hell’s Kitchen neighbors include a block-wide Hess station, a busy tire repair shop and the entrance to the Lincoln Tunnel. On the wall, family members and former deliverymen like “John the Squirrel” (he worked all summer long, says David, because “you gotta have your nuts for the winter”) join images of Suzy I and Suzy II, Paulie’s old pup and the company mascot, as well as a 1930s-style pinup sitting on a cake of ice. It’s placed there not for her looks, David tells me, but for a view of those old-fashioned cubes United City once sold.

In the early days, the outfit was one of dozens and dozens of ice delivery services, nearly all run, like United, by immigrants from the province of Bari along Italy’s Adriatic coast. They didn’t work together so much as fight tooth and nail, says David, now 41—though now that cheaper ice machines make companies like his a dying breed, it’s a different story.

His brother Donald, 47, started worked on the trucks at age 10 with their father, and remembers those big slabs. Then as now, they’d pick up the ice from a plant in Westchester, then bring it back down, dropping deliveries at bars, markets and mongers as they made their way south through the city.

“There was a crusher in back,” recalls Donald of the old trucks, and they’d use it to break up the blocks for seafood shop displays, or to sell small chunks to the hot dog guys. Back before theaters had air conditioners, adds Donald, their father and uncle would hoist ice up to a pool of water most movie houses kept on the roof to cool the rooms from the top down. These days, along with 7- or 35-pound bags of cubes or crushed, the brothers mainly sell dry ice to theatrical productions likeWicked that create clouds of smoke four nights a week.

United City, it should be noted, has always been about distribution, not production. Making ice in quantity requires a lot of water and a lot of room. In fact, they didn’t take over their current office space—essentially a tiny office and a freezer where they keep a few pounds of product for walk-in customers—until 1985. Until then, his grandmother ran the company from her home phone, taking calls and filing orders. At that point most truck drivers had a set route, and if one needed something from the office, they’d do business right on the street.

“We would either call her,” laughs David, “or she would yell down to us.” (And if the crew ran out of ice, he says, she wouldn’t answer the phone.)

But delivery routes, says David, “were the victim of modernization.” By the 1980s, most bars and restaurants had ice machines. Now the business is less about set paths for their five trucks—though some go to small coffee shops, bodegas, Manhattan Greenmarkets and those Broadway plays a few blocks east—than serving big parties and emergencies. Those include ice machines on the fritz, or the holy grail for those who sell ice: blackouts and hurricanes.

During both, David recalls, there were two long lines on their street: one for the gas station and one for their ice. People forget, he says: “It’s a necessity.”

Today United’s biggest headache is probably parking, and maybe the changes in their ZIP code, which is no longer the scruffy, inexpensive ’hood called Hell’s Kitchen but a much chicer place known as Clinton. “It’s small,” shrugs David of their shop. “That’s why we’re still here.”

Still, some things never change in the ice business. While United City might be slow in winter—when the temperature outside is sometimes lower than the refrigerated trucks can even go—summers are still hectic.

“You got three phones ringing,” says David. “you got men on Nextels. You really gotta stretch yourself when it gets busy.”

You still gotta make those nuts, John the Squirrel would tell you if he were still alive.