How Two Dudes Became the Willy Wonkas of City Salad

Meet the dynamic duo behind Chop’t. 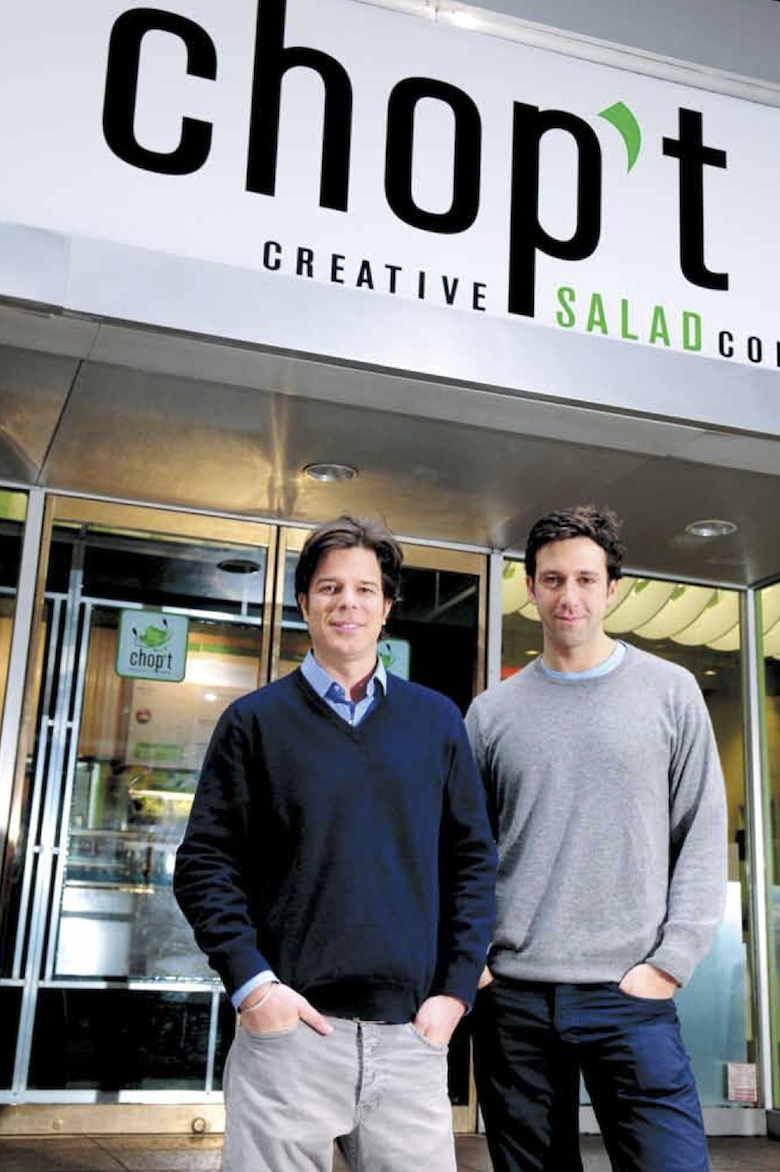 If you can’t picture New Yorkers standing in line for 10 minutes for salad, you haven’t been to Chop’t.

The day Colin McCabe and Tony Shure opened the perennially packed salad counter just off Union Square, the cash registers broke down. “We looked at each other and said, ‘Free food?’” recalls Shure.  Within hours, there was a line out the door; within a few more hours, they ran out of food. But by that time, it seemed everyone in the neighborhood had heard about Chop’t, and a lot of them had eaten its salads.  The next day, there was another line.

Fast-forward seven years, and the two now own a small empire: four more Manhattan Chop’ts (all in Midtown), another five in DC and plans to double their number of locations by next year.  There’s nothing particularly novel about made-to-order takeout salads—these days they’re even on offer in many a bodega—but while the custom-toppings concept is akin to Subway’s, people who actually ride the subway show up here in daily droves, forming lines that rival those notorious Shake Shack queues. It seems the chainlet has hit upon a city salad version of Spanish Fly.

So it comes as something of a surprise that its founders are not retired ballerinas but a pair of dudes who dreamed up the idea back in Wisconsin, where they went to college. Sure, they’d tasted real Dijon mustard on a sophomore trip to Paris, but their entrepreneurial inspiration was on-campus coed consumption, specifically the search for something quick but healthy.

“They’d be lining up for frozen yogurt in lieu of a meal,” recalls McCabe of his carb-conscious classmates, “or they’d go to the allyou-can-eat salad bar at Pizza Hut.” Cue the lettuce-laden lightbulb: choose-your-own-adventure salad bars that offered better ingredients and crave-worthy dressings.

Not everyone thought it was a brilliant idea. After buying a book about how to write a business plan, it took the pair about five years to write it, raise money, find a landlord who’d take a flyer on two guys who had never run a restaurant, and get that first Chop’t open. In the meantime, they lived on the kindness of parents and friends. Once they’d found a space, they camped out in the building’s boiler room.  But in the end, they got it all: a fiercely loyal eatership and even (six years after they opened) profits.

The people in line—hot women in heels, metrosexuals with enviable abs, as well as the occasional cop—clearly care about what they’re eating, but one senses the clientele is not torn between a steakhouse salad or the octopus a la plancha across the park at Casa Mono. Most of Chop’t’s ingredients are commercial and conventional, and its biggest hits—chicken, dried cranberries, feta cheese, edamame and avocado—are salad-bar staples nationwide.

Subtle, Chop’t is not. “If we put in the best champagne vinaigrette in the world, it won’t sell,” says Shure. “But if we put in a Tex-Mex ranch, we’ll get e-mails all day long complaining when we take it off the menu. It’s part of the tradeoff for giving up cheeseburgers and French fries. They want a flavor wallop.”

To be fair, the pair makes no pretense of ecological sanctimony; their priorities are price (no salad over $10), speed and taste.  But as more mainstream eaters request respectable ingredients, they’re taking baby steps in that direction, says McCabe. They’ve switched to Wild Planet line-caught tuna and now get their arugula and mesclun from Satur Farms. A recent menu includes Free-Bird barbecued chicken ($1 more than conventional chicken) and, for 50 cents extra, organic heirloom lettuce. But when farm-market turkey gets too expensive, they switch back to conventional.

Still the focus on quality is impressive, especially for a lowpriced operation. The two of them taste every ingredient they buy.  A lettuce bouncer goes through the greens with gloved hands to make sure there are no wilty bits—or ladybugs. Shure makes all the dressings (there are 30, ranging from steakhouse blue cheese and carrot-ginger to oil-free Dijon) himself.

Customer service is a big part of their success. All comments posted on the Web site go straight to—and get answered from—the two owners’ BlackBerries. Lani Choat, a wardrobe stylist who’s eaten at the Union Square Chop’t several times a week since it first opened, says that when she was pregnant, McCabe or Shure would regularly escort her to the front of the line. And even the longest lines, say customers, move really fast. (One problem Chop’t hasn’t quite solved: deliveries. A recent Yelp reviewer complains that three out of his last four orders were garbled, and McCabe acknowledges that getting complex orders right resembles a game of telephone.)

Now that they’re making money, McCabe and Shure are planning to speed up their expansion, launching four more restaurants this year, and six the next. They’re also exploring new business models, about which they are—so far—pretty secretive. They’ve got a high-powered board of directors, and talk for all the world like experienced restaurateurs. But they insist that their initial ignorance was the key to their success. “Because we didn’t know the restaurant business,” McCabe says, “we knew we just had to have the best salad on the block.”