In the Kitchen with Rosanne Cash

The three-time Grammy winner on teapots, favorite New York haunts and the one food she can’t go without. 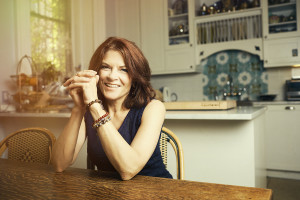 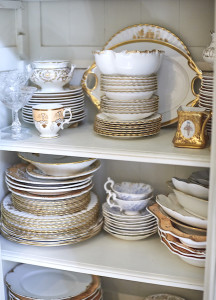 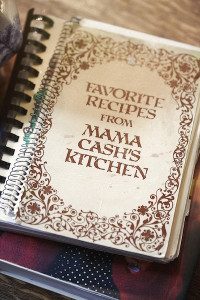 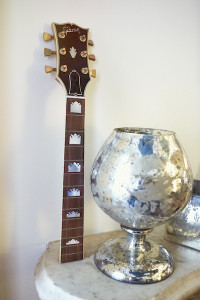 Most people know that Rosanne Cash is the Grammy-winning singer-songwriter who inherited more than just a last name from her daddy, Johnny. In 2014, the Man in Black’s eldest daughter picked up three new Grammys and was inducted into the Nashville Songwriters Hall of Fame.

But you might be surprised to learn that the country, folk and blues star grew up in California—not Arkansas—and that while she still plays sold-out shows and eats barbecue from North Carolina to Texas, she’s hung her hat in Manhattan for more than 20 years. We visited Cash’s gorgeous Chelsea brownstone to hear about her teapot collection, her copy of the Cash family cookbook and how the longtime Manhattanite nurtures connections to real food and music roots.

Teapots by the Dozen

Teapots are the one thing I collect. This is my Mariage Frères teapot that I hand-carried on the plane back from Paris and I love so much. The first one broke and I got another. It’s perfect because you don’t need a tea cozy. It keeps warm. I love it. I love it so much. I drink tea every day; I’m not a coffee drinker.

My one addiction is honey. It helps my throat, but that’s not why I love it. I’m really, really obsessed. I get it from all over the world. This one I got in Nova Scotia, this one in Denmark, this one in Tennessee, this one in Vermont. I buy honey everywhere I go. On the road, I wrap it up in my clothes and put it in my suitcase. I put it in everything.

The Great Wall of China

I love my stepmother’s [June Carter Cash] china that I inherited. I’ll take out a few pieces at a time—it’s over 800 pieces, they’re SO beautiful. Most of it is at our place upstate in Chatham.

The Care and Feeding of Johnny Cash

My dad’s mother was one of the greatest Southern cooks ever, ever, to live. They lived in Arkansas but she was from North Carolina. She made this cookbook of her recipes; it’s all broken up because I’ve had it forever. It’s so sweet. Banana pudding, corn bread, apricot salad. Her own BBQ sauce. Chicken and dumplings. That’s what my dad grew up on.

He had very particular country boy Southern food loves that he kept his whole life, like putting peanuts in Coke. That was something kids in the South did, because you get the salt and the sweet at the same time. And it fizzes.

And he’d put corn bread into buttermilk and eat it like that. I just love that kind of food so much. My grandmother made the best fried chicken in the world. Coconut pie. Chocolate pie. Pecan pie. Chess pie. And the Southern cakes. Oh my God. Southern cakes I love SO MUCH. Jam cake. Caramel cake. Coca-Cola cake. Red velvet cake. I make a great caramel cake. It’s my son’s favorite.

When I’m on tour I take nuts of all kinds. Brazil nuts, almonds, pecans, walnuts. That’s what I eat if I can’t get a meal on the road. And I always bring honey home. Once my daughter Carrie was on the road, she’s a musician, too, and we were complaining back and forth. “I didn’t get any sleep, it was a terrible hotel, the sound check went really bad…” and then I said, “I’m out of honey.” And she said, “Oh no! Are you OK?!”

Once on tour we were playing St. Louis and Kansas City and Texas and we did a barbecue tour. That was fantastic. I really love Memphis barbecue so much. I like the sweet, saucy kind. I was there two weeks ago; we went to Gus’s Hot & Spicy Famous Fried Chicken. Oh my God, it was fantastic. Just in-credible. And once we went on a key lime tour. We were in Florida and had Key lime pie every place we played.

Here in the city we eat out often. Le Zie on 7th Avenue, we’ve been maybe 500 times. I love Cookshop on 10th Avenue for lunch, I get the Hudson Valley Chicken Salad. If I’m feeling fancy, I go with my girlfriends to La Grenouille for a drink and eat lunch at the bar. My daughter Carrie lives in Park Slope so we go to Brooklyn pretty often. Northeast Kingdom, Brucie, and I love Buttermilk Channel. Carrie makes the best coconut cake in the WORLD. She has her own online cooking show called Big City Grits, and she made me a cookbook, which is one of my favorite gifts I’ve ever received.

I make a really good spaghetti Bolognese that my son loves. I especially love to cook risotto, but he doesn’t like risotto so I don’t get to make it often. I make a great roast chicken with a sweet potato mash. We have a tiny little grill in the garden so we grill out a lot: chicken, fish, burgers.

While I’m cooking I listen to everything. The blues, field recordings, Billy Bragg, everything.

On the Beach with Batali

Last spring, we got a little place on the beach in the Virgin Islands, and Mario Batali and his family were next door. I love Babbo, I’ve been a million times to Babbo. So we started hanging out, our kids played. He went out on a boat one day and came back and said, “I’ve just caught this fish, want to eat with us tonight?” He made all the sides, and we all ate outdoors, this fish he’d caught in the ocean a few hours before. It was one of the most magnificent meals. So simple, so beautiful. He’s very sweet. And he makes that grappa that will kill you.

Country Life, in the City

I love the Union Square Greenmarket. When my five kids were growing up, we’d take them to the country to pick apples. It’s good for kids to know where their food is sourced from. It’s not from the plastic bag they bought in the store. It began somewhere, in the ground or on a tree. Or in the ocean or in a river. It’s good to source it back. That’s how I feel about music, too. It’s great for young artists writing in a folk tradition to source it back, to know the tradition they come from. In the same way, it’s important for a city child to go to a farm, see the apples grow, pick blueberries off a bush. This is something we share. We all eat blueberries and they grow on a bush. It connects you to the whole planet, the rest of humanity.

This interview has been edited and condensed for length and clarity.