Innovators in bread, mushrooms, and on the table. 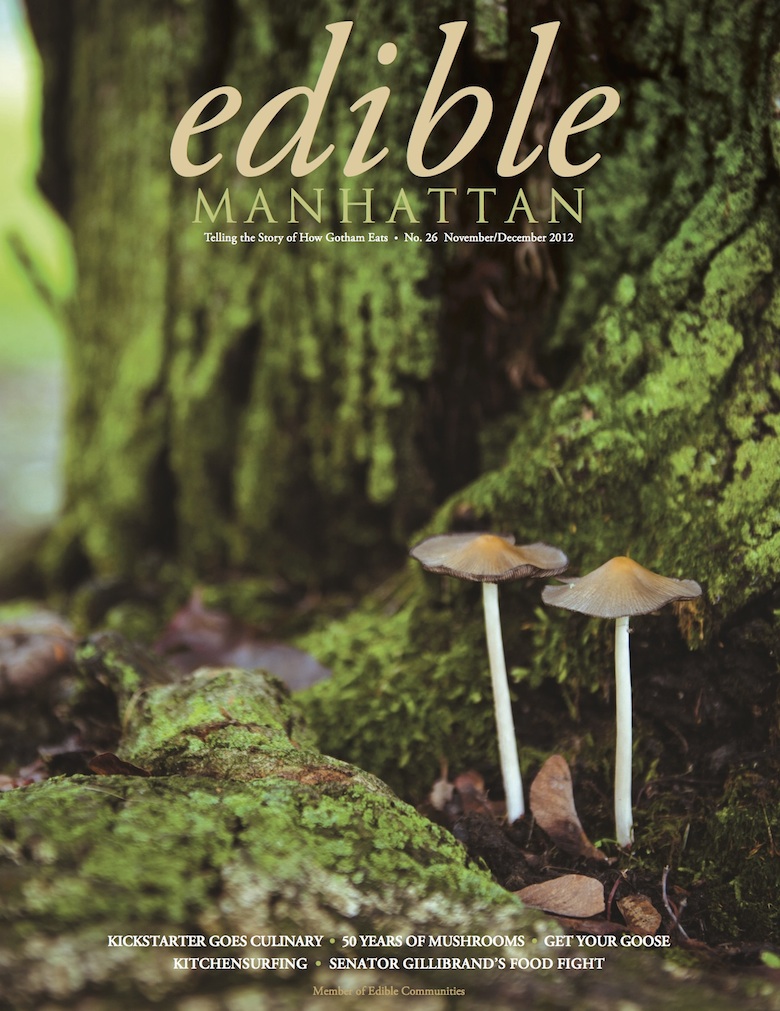 Amy Scherber is my new hero.

Like you, I was aware there was a brand called Amy’s Bread in our crowded town of quality carbs (and that its semolina-raisin-fennel loaf made any cheese board immeasurably better). But after reading Regina Schrambling’s profile of the pioneering namesake, I don’t just want Amy’s bread—I also want her autograph. Turns out Scherber ended the bad old days when crust-and-crumb junkies could hardly find a fix. She decided New York deserved better and, after proofing her craft in France, fired up ambitious ovens in Hell’s Kitchen 20 years ago and has been serving Paris-worthy baguettes and serious sourdough ever since.

Her vision changed the city foodscape forever, but she’s just one of the culinary game-changers in this issue, innovators whose ideas are greater than sliced, well, you know.

Cut from the same conceptual loaf is John Cage, who would have turned 100 this year. He was an avant-garde composer but, to my taste, his greatest work was not audible but edible: he founded the current incarnation of the New York Mycological Society 50 years ago. So many people foraged with Cage, our writer compares the common claim to saying you once got drunk with Norman Mailer. Today the club’s 200-plus members hunt mushrooms across Manhattan and beyond, connecting to the natural world and collecting wild delicacies that outshine anything money can buy.

As ideas go, good bread is ancient—and hunting and gathering is even older. Recently, cooking with fire was also rediscovered in modern Manhattan. Famous for the refined fare at his first Michelin-starred Mas (French for farmhouse), chef Galen Zamarra considered how to evolve his cuisine when a light bulb went on—or rather, a flaming log. So, for his new restaurant Mas (La Grillade) the post-modern Prometheus brought in custom grills and converted the newsstand next door to what must be the West Village’s only woodshed. He cooks nearly everything on the menu—from lamb to lettuce—over embers, but the results are more Michelin man than cave man. While it’s an insult to say someone has reinvented the wheel, I give Zamarra high praise: he has reinvented fire.

Other ideas in this issue are completely contemporary. Consider Kitchensurfing.com, where anyone can post a chef profile and land a gig making a meal in a stranger’s home. Or chew on the economic impacts of Kickstarter, the downtown-based fund-raising site that helps creative types raise cash. In just three years, it’s helped raise more than $312 million for over 30,000 projects—including culinary endeavors aplenty, from a Rockaway Beach seafood truck to a taco joint in South Korea.

But one story in this issue is about something you can’t taste: Senator Kirsten Gillibrand’s work on farm policy. For the first time in decades, New York has a seat on the powerful Senate Agriculture Committee, and while that phrase is nearly synonymous with Iowa cornfields and industrial agribiz, Gillibrand says it’s high time the farm bill instead foster sustainable systems like farmers markets and CSAs. Now that’s my kind of big idea.

These innovators’ ideas are greater than sliced bread.