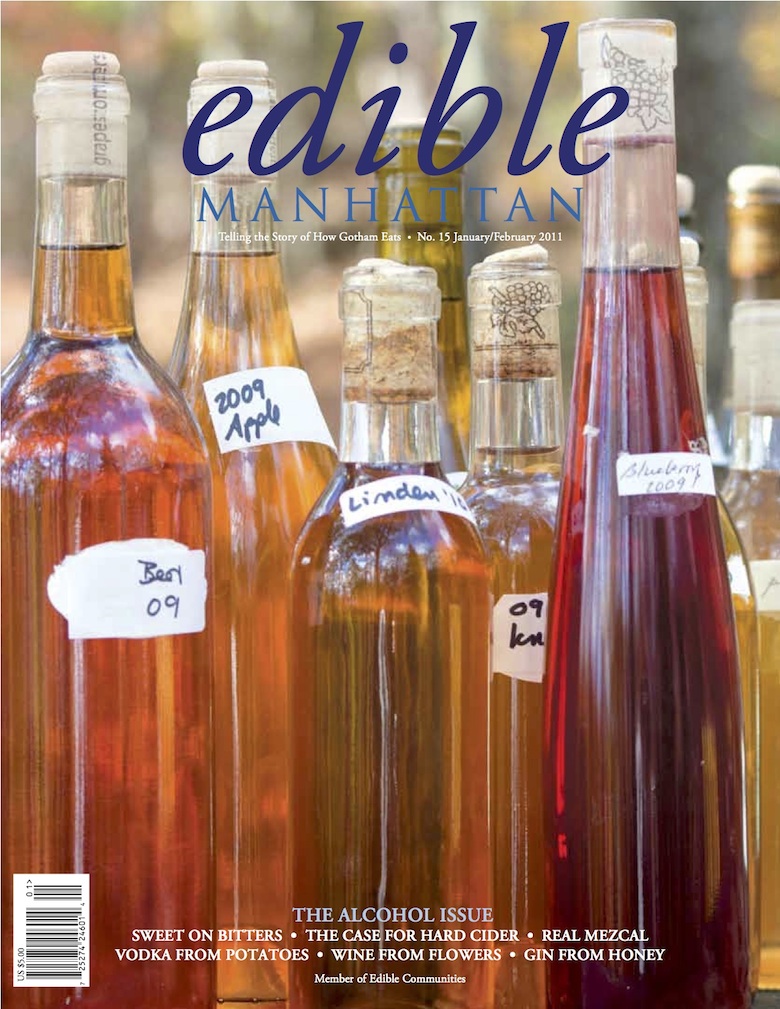 Six months ago, when Edible Manhattan’s staff set our sights on our first all-alcohol issue, the summer sun was high in the sky and the table we sat at nearly groaned under the weight of Long Island lobsters and super-sweet corn. Now, on the longest night of the year—I’m writing this on the winter solstice—I marvel at alcohol’s Ball-jar-besting ability to preserve seasons under glass. In true Edible style, this issue runneth over with stories of bucolic booze.

Not that such adventures in alcohol need be private. I’m delighted to find so many high-minded drink tinkerers mastering the craft and going pro. While my colleagues and I were cracking lobster shells and hatching this issue, Scott Krahn was perfecting his liqueur made with Damson plums, an all-but-forgotten tart variety still grown upstate at Red Jacket Orchards; now his summery experiment staves off chills in the likes of Marea and WD-50.

A cluster of similar companies applies slow food sensibilities to kindred spirits. Out east, an engineer is coaxing Long Island vodka from the area’s famous potato crop while up in Westchester a former banker is transforming honey into his aptly named Comb brand of award-winning vodka and gin. Both these sweet schemes are now savored at the best bars around—Blue Hill is even collaborating with Comb for a custom incarnation made with Stone Barns honey and herbs.

But some of the biggest buzz in town is about a beverage that’s centuries old: Bartenders citywide are suddenly spellbound by mezcal, an ancient Oaxacan spirit made from agave that’s been roasted in pits, crushed under a horse-drawn wheel and distilled in tiny clay stills. Renowned mixologist John Lermayer calls it the most honest spirit on the planet, while the New York Botanical Garden’s head botanist says mezcal’s newfound marketability—and the income it generates for communities who steward wild agave—could save Mexico’s most threatened forests.

If that doesn’t inspire you to vote with your glass, I hope our first-ever Op-Ed will.  Our inaugural argument makes the case for rediscovering the United States’ own ancestral alcohol, hard cider, and calls upon the Big Apple to drink an apple a day. I’ve made it my New Year’s Resolution to do so, and raise my glass to a bountiful 2011 harvest—one we can all hope to drink for years to come.