My favorite food-system solution in this issue isn’t a shiny machine or a killer app. 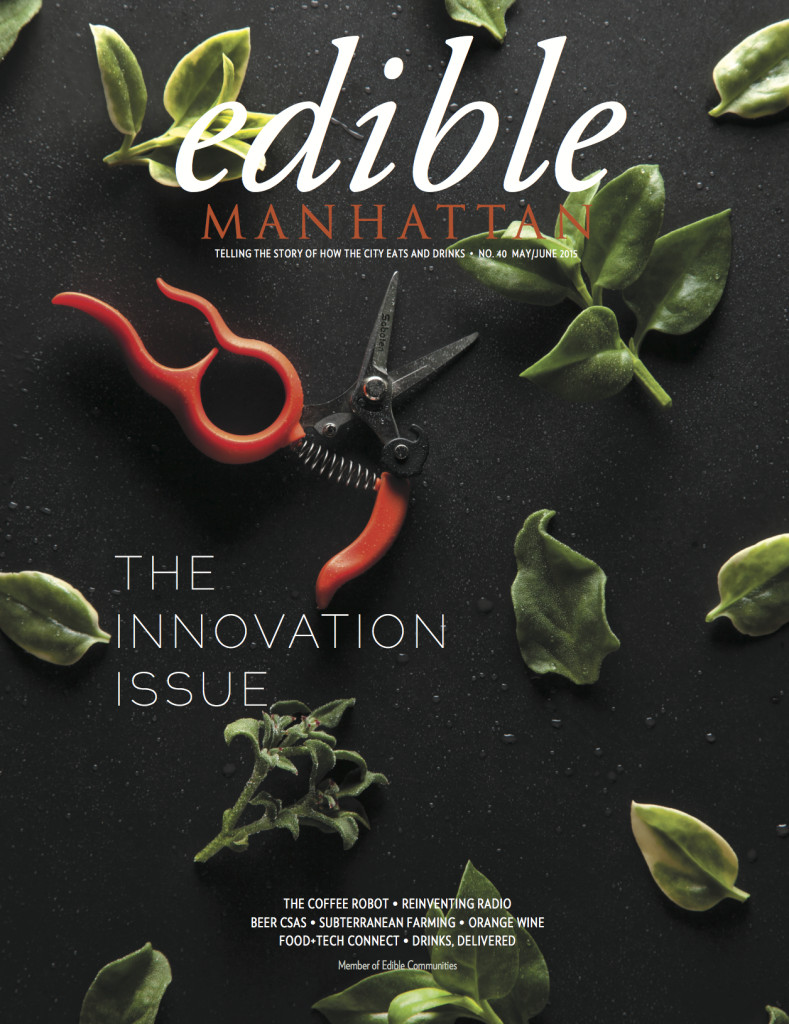 For our second annual innovation issue, we bring you stories from both Manhattan and Brooklyn. You can browse the full Manhattan-centric table of contents here. Check out even more stories from this issue over on Edible Brooklyn.

Our second-annual Innovation issue runneth over with apps, hacks and gadgets.

We’ve got stories about soil-free rooftop farms and halogen-lit subterranean gardens. Botanists using their lab equipment to build better bitters. A Bushwick radio station broadcasting the food revolution to earbuds everywhere. Brands reimagining booze delivery (yes, there’s an app for that). The museum that debuted with a cereal gun. And Danielle Gould, whose Food+Tech Connect holds up a crystal ball, or rather a smartphone screen, showing start-ups world-wide using keyboards and code to reinvent our food system, unleashing everything from traceability to profitability.

And yes, we’ve got two stories starring robots: one dispensing wine at an East Village shop, others in a Gowanus lab pouring five perfectly precise pour-over coffees at a clip, sans hands.

But my favorite food-system solution in this issue isn’t a shiny machine or a killer app. Rather, it’s a brainless invertebrate poised to save our city from ecological destruction.

Consider, as they say, the oyster.

More specifically, consider the Billion Oyster Project, a new nonprofit working to restore the once-ubiquitous bivalve to our urban waterways. Time was, New York Harbor boasted 330 square miles of oyster reefs. A million local oysters slid down New York’s throats each day and our streets were paved with their shells — until we eradicated those mighty reefs with a one-two punch of over-exploitation and toxic pollution.

But today the Billion Oyster Project envisions a return of the native — and they’re tapping teenage students at the New York Harbor School on Governors Island to strategically seed our waterways with a billion bivalves. It’s not some quaint homage to the past, nor even the resurrection of an iconic eat. (In fact, pollution will make these oysters quite inedible for decades or even centuries to come.) Rather, scientists are bringing back these bivalves to literally shore up our city — as a buffer against catastrophic surges from superstorms like Sandy, which meteorologists foresee as the new normal. (And they won’t just protect us from Poseidon; meanwhile oysters actually clean the water, each selfless shellfish filtering up to 50 gallons per day, which will invite more wildlife to again call our harbor home.) I’m reminded of Thoreau’s famous line, “in wilderness is the preservation of the world.”

But this isn’t just the work of wilderness; these oysters aren’t coming back on their own. Rather, the Billion Oyster Project is a carefully engineered harbor-hack, an innovative vision of manmade reefs that may save our collective bacon.

So join me in raising a Long Island half shell to the brains behind it, especially the high school students who design and build aquaculture labs, raising two million bivalves annually, and scuba dive near the Statue of Liberty to build underwater reefs these brave new oysters may one day again inhabit by the billion.

To them — and the future. It looks bright.