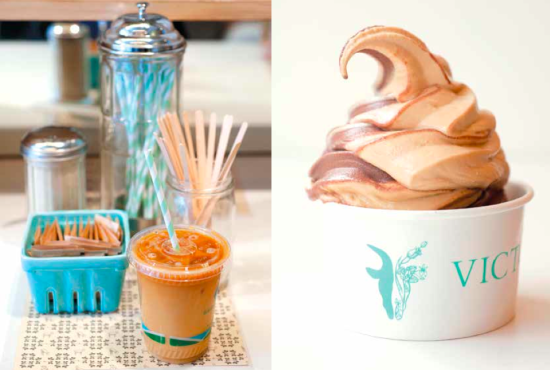 West Village—Amid Carmine Street’s mix of scruffy and chic sits a daintily appointed shop whose sidewalk signboard reads “Victory Garden.” The shop, it turns out, is a Tasti D-Lite for the enlightened, a Pinkberry with a conscience, touting a specialty as delicious as it is unusual: goat milk soft serve.

When Sophia Brittan, 29, opened the shop in June 2011, it quickly developed a cult following. “I just serve things that reflect the way I want to eat, and it’s worked,” says Brittan, somewhat incredulously

Born in France and raised in Connecticut, Brittan’s globetrotting family includes her Mexican mother and her Anglo-American father, whose extended family encompasses a United Nations–worthy array of cultures. She fell in love with Morocco on a trip there when she was 15. At Georgetown, she majored in comparative studies focusing on the Middle East and Latin America, and logged stints studying abroad in the Dominican Republic and Egypt.

Her travels made her realize that when it comes to culture, the way to break barriers is to break bread: “The easiest way to getting to know someone, especially when you go to someone’s house, is to make a food offering.”

So the future goat-milk entrepreneur formed a goal to enter the international hospitality business. After graduating in 2005, Brittan spent six months in Beirut studying Arabic (where, for fun, she videotaped a pre-You-Tube-era cooking show) then came to New York to enroll in the French Culinary Institute. But while her days at FCI were full of boeuf bourguignon and blanquette de veau, she hungered for the light, sun-drenched flavors she’d fallen for in Lebanon. “I really missed the Mediterranean style of cooking, and how fresh everything was, the way women would bring greens from the mountains to sell in the streets.” She especially hankered for the taste of goat’s milk.

“There’s something really warm about it,” she said recently. “It’s made on family farms, and I really like its earthy flavor.” By the time Brittan graduated, she had hatched a plan, inspired by dondurma, a famous goat-milk ice cream from central Turkey made with salep, the root of a wild orchid flower. This rich regional specialty, prized as both healthful and delicious, is also reputed to be a male aphrodisiac. Dondurma’s beautiful fresh flavors were a far cry from the ubiquitous sweet stuff she found in New York.

“I love soft serve, but I realized there’s a disconnect,” she explains, referring to the “fake stuff” in standard highly processed offerings. “I wanted soft serve that was healthy and local.” 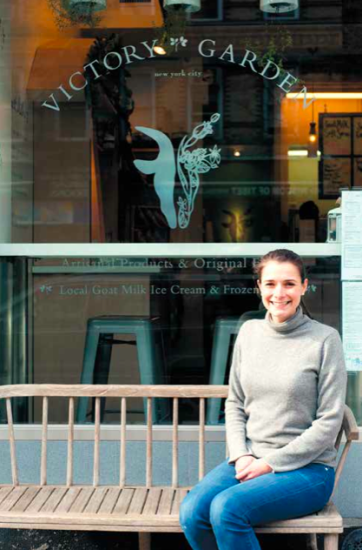 So in 2009 Brittan traveled to Turkey to revisit the birthplace of dondurma, eventually
developing a version that riffed on the original while departing from its rich, elastic texture.

Back in New York she set out to open a shop. Finding the right location, negotiating the byzantine byways of the Village’s Landmarks Preservation Commission and jumping other regulatory hurdles were a nightmare—“I think I cried every day,” she recalls—but spending two years perfecting her wide array of flavors was pure joy.

The shop’s name references her real first name, Victoria, as well as the vegetable gardens that sprang up during World Wars I and II to stretch the nation’s food supply.

Victory Garden offers a small menu of soups and salads, plus goat mini-cheesecakes and unique offerings like “Chia Seed Parfait,” a mixture of homemade cashew milk, chia seeds and a touch of agave nectar, as well as a few inedibles, like handmade lotions and goat’s milk soaps. But the star of the shop is unquestionably the goat’s milk soft serve, available in flavors like salted caramel, medjool date with orange blossom, and a coffee option made by infusing goat’s milk with fresh coffee grounds, then perfuming it with cardamom and that mastic.

Brittan gilds the lily with similarly minded toppings like halvah, organic cocoa nibs and honeycomb candy, handmade by the Brooklyn artisan confectionary Liddabit Sweets. One of her most popular summertime flavors is the Victory Garden, a subtle herbal mix of sage, rosemary, mint, lavender, cardamom and orange blossom water. 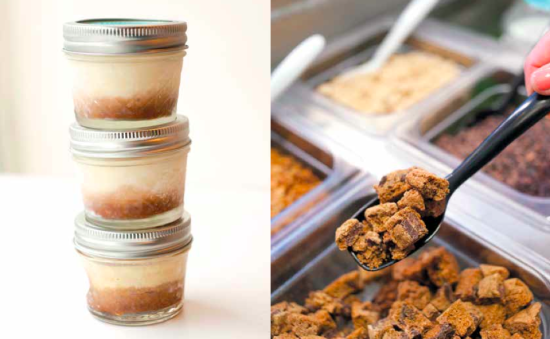 Brittan says expansion could be in her future, especially since her fans include tourists from as far as Australia and Japan; California visitors have exhorted her to open a West Coast branch. It was in the Bay Area, after all, that goat’s milk first found its footing in the American culinary scene, albeit in a much more old-world form than soft serve.

“I didn’t want to recreate a traditional product,” explains Brittan, “I wanted to take those flavors, like rosewater, and put it in an American format.”