A few Falls ago I had a surfeit of unremarkable romas which I roasted with low heat and lower expectations. They were so good, I now look forward to October as tomato season’s super-sweet finish. 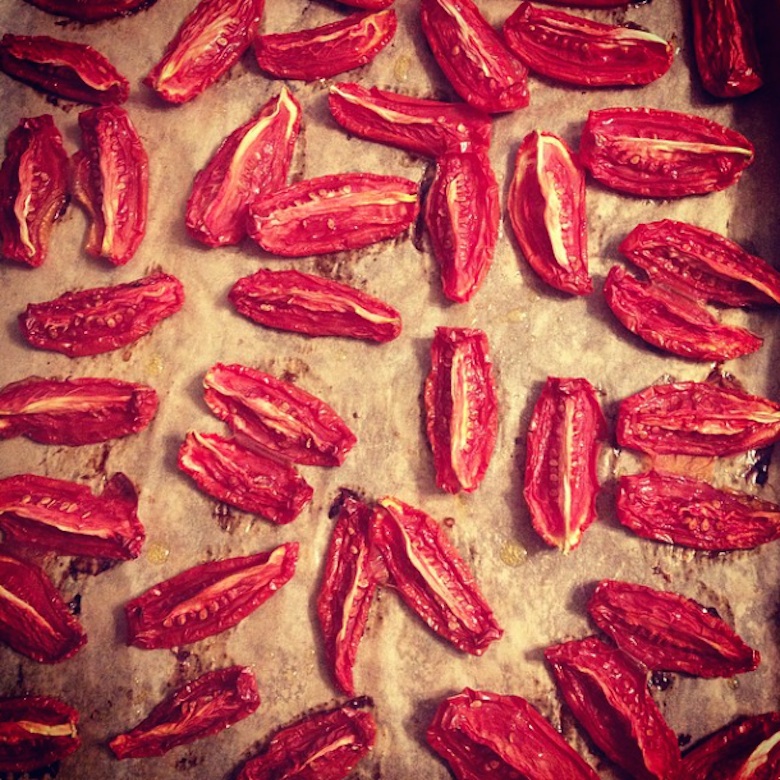 You say summer, I say tomatoes. But now it’s October and my CSA hasn’t let up.

Sure, the tomatoes now arriving in my weekly share aren’t the same sublime sandwich slayers I wolfed down all August, but I’m not complaining. Because while the sun’s lower station in the sky means less on-vine flavor, it also means I’m ready to turn on the oven again, which is exactly what these late-season tomatoes are begging for.

I got over sun-dried tomatoes around the time of the last government shutdown. But a few Falls ago I had a surfeit of unremarkable romas which I roasted with low heat and lower expectations. They were so good, I now look forward to October as tomato season’s super-sweet finish. Try it once and you will too.

Simply quarter your tomatoes lengthwise (romas are best, but I also like this with halved cherries), drizzle olive oil to coat, spread em cut-side-up on a baking sheet (feel free to nestle em tight—they’ll shrink) and roast at 250 for several hours, until your kitchen smells like a tomato-paste utopia. As the tomatoes shrink, their flavors skyrocket.

I like to take em out and before they look like the pasta salad ingredient I overdosed on in college, but whenever you call them done, just stick em in a Ziploc in your freezer to toss as flavor bombs into soups all winter—that is, if you can resist eating them all straight off the pan, or tossed over pasta 90s-style while you blast Smashing Pumpkins. Speaking of which—if you let those tomatoes keep roasting, they’ll shrivel into deep burgundy, tomato candy, sweet enough to give to Trick-or-Treaters.