The literary luminary explains the relationship between pastured poultry and light cigarettes and why policy can’t accomplish what meatless lunches can. 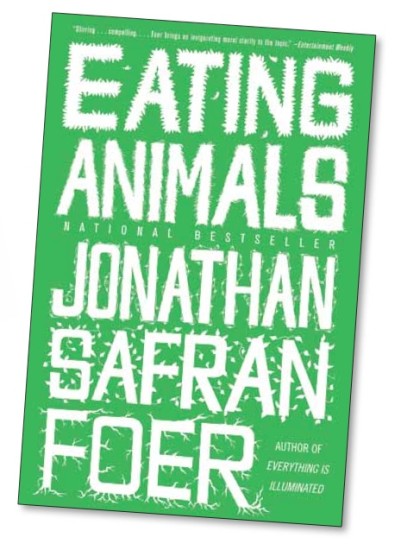 Writer Jonathan Safran Foer is best known for creative writing—his novels Everything Is Illuminated and Extremely Loud and Incredibly Close won major critical acclaim, and last summer the New Yorker included him in their “Twenty Under Forty” fiction issue— but a year ago he published an examination of the meat industry that we desperately wish was fiction, too. Eating Animals chronicles the horrors of factory farming (and what Safran Foer regards as the failings of small, pastured animal husbandry) but while the bad news isn’t necessarily new, his treatment of it is. We recently caught up with Safran Foer to ask him about Eating Animals and about not eating animals.

EM: What fuels you when you’re writing?

JSF: I have to go somewhere where there isn’t food or I wouldn’t get anything done. I have to remove myself from a food environment. I can’t think of anything in the world that loves distractions as much as writing does.

EM: Are you a coffee drinker?

JSF: I drink a lot of coffee. I wake up at 4:00 every morning. It’s so I can be productive. My kids get up at like 6:30, I just like having that time. There’s nothing going on in the world except for thinking.

EM: After reporting on the horrors of the meat industry, is it hard to walk past a hot dog stand?

JSF: That’s funny. I talked to many, many different kinds of farmers while doing my research and one constant, whether they were a small farmer or a factory farmer, was that they all said they would never eat a hot dog. It seems to me a pretty good idea not to eat things that farmers wouldn’t eat.

EM: Where do you like to eat? Where does your agent take you for lunch?

JF: The truth is, I do almost all my eating at home and my agent hasn’t taken me out to lunch in 10 years. She’ll often have me to her place and she’ll cook.

EM: That sounds extremely atypical. Isn’t she supposed to take you to Michael’s or something?

JSF: She’s extremely atypical. She’s a handsome person. It’s really nice. Anyone can go to a restaurant but it’s a special thing to eat at somebody’s house. She’s often accidentally cooked meat for me. It’s all right, it was an accident, and she has more or less become a vegetarian since Eating Animals came out. She cooks an incredible baba ghanoush. It’s unbelievable. She chars the eggplant. I would put her baba ghanoush against any in the world. She grew up in Lebanon.

EM: Does it bother you that New York’s most eco-conscious, farm-to-table restaurants serve lots of meat?

JSF: At Blue Hill you can eat really, really well as a vegetarian.  I think Dan Barber is doing amazing stuff and if I had met him a little bit earlier he would have been one of the heroes of my book.

EM: What do you make of the whole-beast, nose-to-tail phenomenon? The person at the next table might be eating—

JSF: Brains and eyeballs. There’s a strange combination of refinement and gluttony. This movement toward eating less likely parts of the animal, and sexualizing it, doesn’t point to comfort that has been achieved but rather a discomfort that won’t go away. Meat takes on these weird exaggerated forms, [becomes] a fashion statement. The movement of eating ecologically gave rise to this other way of thinking about food—which I think granted people permission to become excited by tangential issues. Food shouldn’t be wasted, but that doesn’t mean that we need to pose with it. It doesn’t follow that there’s anything cool or trendy or intelligent about eating the weird parts, or about having a picture of some 20-year-old hipster in New York magazine with a carcass over her knee that she’s spanking.

EM: Fifteen years ago, everyone I knew who was trying to eat ecologically was vegetarian. Now they’re taking butchery classes.

JSF: That’s because they’re not thinking ecologically anymore. To pretend that that kind of meat eating is environmentally conscious is like saying that smoking light cigarettes is good for your lungs. It’s not true, it’s just better than normal cigarettes. There are places in the world where [livestock] farming is good for the land, but not that many, and we tend to use those places as an excuse. Think about serving six billion people, not 60 people at a restaurant downtown. My point isn’t that we shouldn’t ever eat meat. My point is that we shouldn’t pretend we’re being hippies because we’re eating the snout of the pig.

EM: Your book makes the case the we should vote with our forks—that we as eaters individually make decisions that together shape the world. But what about policy? Say, policies that subsidize industrial agriculture?

JSF: We already have laws that forbid cruel practices, they’re just not enforced. I guess I don’t have a lot of faith in the idea of government protecting us from foods that are antithetical to our values, destructive to our environment or just unsafe. But with food, I can’t think of any other choice where the consumer has so much power.

EM: But corn subsidies prop up [factory farms, which rely on it as cheap feed]. Without them, prices of factory meat would go up and its consumption would come down. That’s not asking government to make something illegal.

JSF: But it’s asking them to advocate a policy that is not in the interest in 99 percent of the American meat industry. Which is hard. I’m not saying they shouldn’t do it. But at the end of the day we need to eat a ton less meat. I have yet to meet the person who disagrees with that statement. Anthony Bourdain agrees with that statement. Can I imagine half the planet going vegetarian?  Not anytime soon. Can I imagine half of the meals on the planet being vegetarian. I can—a kind of lifestyle shift in which people might say “I won’t have it at lunch.” And finally can I imagine the government doing anything that would bring about that level of reduction of meat consumption? Impossible. I can imagine them saying “cage size should be increased by three inches,” but to bring about real change, I just can’t see it happening.

But the shift in consciousness that would require half of our meals to be vegetarian doesn’t seem that out of reach. It’s a question of reframing the conversation toward the agreement that we need to eat less meat. The more we know about effects on the environment and on human health and on rural communities, the greater an appreciation we have for why it matters. It’s not that hard to imagine things changing really dramatically, really quickly.