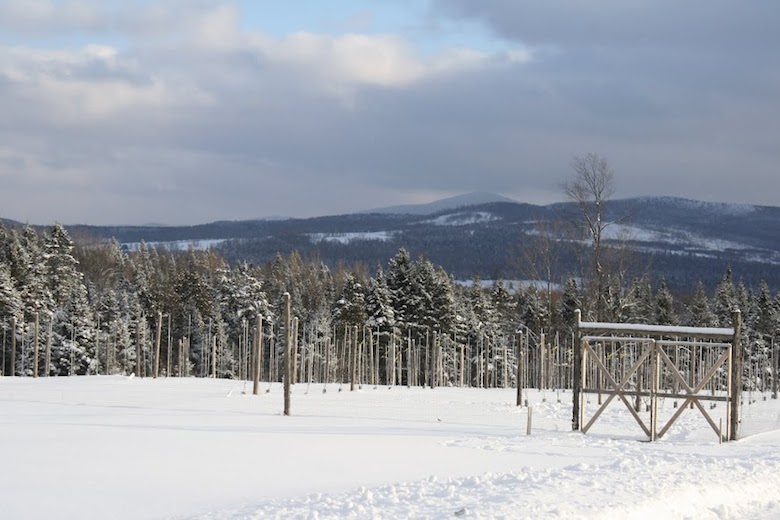 The Northeast Kingdom in Vermont, called just “The Kingdom” by Vermonters, conjures images of a magical, wintery Eden, an otherworldly place with its own language, where a benevolent ruler sits on an icy throne.

Not exactly, but sharing a border with Canada is the next best thing. Montreal is just 175 miles away and, since linguistic and cultural boundaries don’t respect territorial ones, Canada’s influence seeps through along with its famously frigid temperatures. The cold is what rules this Kingdom.

The remoteness and icy climate don’t faze Eleanor and Albert Leger, founders and proprietors of Eden Ice Cider, whose bottles grace many of New York’s best drinks lists. Albert is originally an Acadian from northern New Brunswick, while Eleanor’s family goes back seven generations in Charleston, Vermont, where Eden is based, with a family plot in the local cemetery to prove it. They didn’t start out in agriculture but when their two kids went off to college they bought an abandoned dairy farm and in 2007 made the transition to rural life.

Once they had staked their claim, the next step was coming up with a business. They knew they wanted to create a singular artisan product that would reflect the soil, climate and terroir of that part of Vermont. Something that would combine their skills and didn’t require too much start-up capital or drain their life savings. With Albert working off the farm much of the week (he teaches chemistry at a private school in New Hampshire), animal husbandry was not an option. Growing produce in the short growing season didn’t make much financial sense either.

One thing was clear: They had good terrain for growing apples. After mulling over various ideas, the light-bulb moment came one winter when they were in Montreal. A friend suggested they try ice cider — an apple-based dessert wine known as cidre de glace across the border — and after one sip, they looked at each other and said: “This could work!” The Legers had visited Normandy and loved hard cider (cidre) and the distilled apple brandy called Calvados. But ice cider has more true apple flavor — Eleanor describes the profile as “the essence of apple in a bottle.”“Cider doesn’t taste apple-y the way wine doesn’t taste grape-y,” she says. “But ice cider tastes like apples.” That may have something to do with the fact that it takes eight pounds of apples to make one 375ml bottle of ice cider.

What made the elixir ideal for the Legers wasn’t just that apples are the largest fruit crop in Vermont, but also that ice cider needs freezing temperatures to concentrate the juice’s flavors and sugars before fermentation. Freezing temperatures are something else northeastern Vermont has in abundance. The potential of a niche product with a high price point was also attractive. Combined with Albert’s chemistry chops and Eleanor’s background in corporate product development, they were a veritable dream team in the making.

Ice cider’s frosty cousins are centuries old: ice wine — a dessert wine made from the juice of wine grapes frozen on the vine and perfected by the Germans centuries ago — and applejack, which is cider that is fermented and then frozen. The latter was America’s original spirit, favored by colonists before grains and grapes took over.

But ice cider had only been invented just over a decade ago by Christian Barthomeuf, an enterprising Frenchman who moved to Quebec in the ’70s. If the concept of terroir is understanding the essence of foods grown in the right place, what Barthomeuf realized is that apples were better suited to growing in the frigid climate than temperamental grapes, so he applied the same methods to create the world’s first ice cider, spawning an entirely new industry. (Canada is now one of the world’s largest producers, after Germany.) Inspired by Vermont’s potential to be known as an ice cider region — it didn’t hurt that ice cider also happens to pair beautifully with cheese — the Legers set out to make the first in the state.

Typically, when making ice wine, the grapes are left on the vine to freeze and then pressed to extract the sweet juice (called “cryoextraction”). This can also be done with apples, but it is much more difficult since many varieties drop their fruit before they freeze. The more common method — which some purists decry as a shortcut — is to harvest apples in fall and keep them in cold storage until the temperatures fall below freezing, when the apples are pressed and the juice is left outside until the water freezes and separates from the sugar (called “cryoconcentration”).

Eleanor explains, “Grapes don’t have tannins in the flesh, it’s just watery juice. Apples have woodier and starchier fruit, so freezing them doesn’t give the same result. It also tastes different than just pressing juice and freezing it because they need several years of aging in barrels and don’t end up tasting like apple. We wanted our ice cider to be reminiscent of fresh-pressed apples and didn’t see a way of using frozen fruit that made sense to us.”

So Eden presses its apples in December and stores the cider in thick-walled 250- to 300-gallon totes that are left outside for six to eight weeks, using the natural fluctuations in temperature to concentrate the sugars and flavors. The residual liquid at the bottom is then fermented, blended and finally filtered and bottled by September, an entire year since the apples were picked.

The key to making an ice cider with depth and complexity is using good apple varieties. But unlike hard cider, which is best when made from cider apples, ice cider can be made entirely from dessert apples or eating apples. The Legers primarily use apples from two nearby orchards that subscribe to the Eco Apple certification program: Champlain Orchards, the largest dessert fruit producer in the state, and Scott Farm, which now grows several heirloom varieties like Calville Blanc, Reinette, Ashmead’s Kernel, Esopus Spitzenburg and Black Oxford, to name a few. Their purchasing power helps preserve diversity, and they’ve taken it a step further by teaching several orchards how to make their own and even authoring a guide to the making and marketing of ice cider.

The Legers themselves have planted 32 heirloom varieties that will eventually supply a fifth of their needs. “We are using sustainable practices and applying the philosophy of biodynamics to understand what the trees want and grow best in. It’s challenging work because we are pushing the upper latitude limit for growing apples.”

They’ve come a long way since their first 150-gallon batch in 2008 and are now one of the leading ice cider producers in the country, having already garnered multiple gold medals. Their flagship Heirloom Blend is made from 11 heirloom varieties, each adding different elements of acid, tannins and sweetness. (The 2012 vintage will be hitting shelves as you read this.) Undaunted by the challenges of making single-varietal ice cider, which can lack complexity, they succeeded with Northern Spy, which they barrel age in French oak for added structure.

Given their remote location, selling direct from a tasting room didn’t make sense, so Eden started self-distributing in Vermont and then expanded through distributors to Boston and beyond. Access to the New York market came courtesy of Communal Brands, a Brooklyn-based boutique wine distributor who heard buzz about Eden at the New York Wine Expo. Kat Kelly, one of their reps, says, “As tasters of wine, we grasped the quality right away. It had a perfect balance of sweetness and acidity reminiscent of riesling, which we love.”

Ice cider’s unique flavor profile appeals to a broad spectrum: drinkers of fine wine, dessert wine and cider. That includes some of the city’s top beverage directors like Juliette Pope of Gramercy Tavern who describes Northern Spy as “one of the most explosively delicious and interesting things I’ve tasted in some time.”

Not content to rest on their laurels, they noticed the growth of the craft cocktail movement, saw an opportunity to provide a distinctive cider-based product in the aperitif wine category and collaborated with fellow Vermonter and “maître liquoriste” Deirdre Heekin, author of Libation, a Bitter Alchemy, to create Orleans, another unique artisanal wine, fermented to dryness (meaning not sweet) and infused with Vermont-grown fresh herbs.

Pope says the Orleans is one of her and her staff’s favorite beverages. “Basically, it’s like a vermouth but with a cider base — cider macerated with basil and anise hyssop — fabulous just straight, on the rocks or as a cocktail base.” She features it both ways: chilled on its own and in an “Old Orleans” cocktail made with Laird’s Bonded Apple Brandy, maraschino, orange Curaçao and Fee Bros. Whiskey Bitters.

But ice cider is not just for booze hounds; its fans include chefs and food lovers who enjoy pairing it with everything from Cabot’s Clothbound Cheddar and creamy blue cheeses to pâté and maple crème brûlée. Eleanor’s sensible advice for the home cook: “If something goes well with apples, it will go well with ice cider. That means pork, cheese, duck, venison, foie gras and most desserts, except chocolate.”

Sounds like the ideal libation to accompany those rich winter meals, with a glass of Orleans on the rocks to kick things off. Just stick a bottle or two in the snow until well chilled and serve.