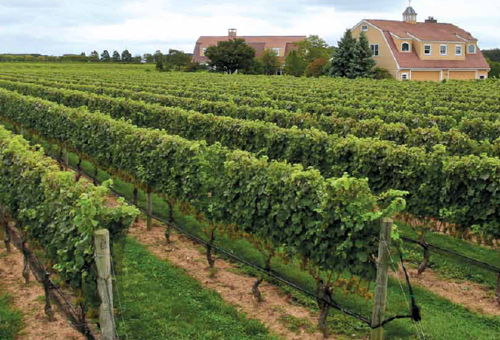 These rows of pinot blanc go into Lieb's blanc de blanc, a North Fork sparkling wine that would suit the Royal family.

It was just a short month ago that vino-minded aristocracy-watchers launched a Facebook campaign to ditch Champagne at the Royal Wedding and instead pour sparkling wine made on the northern side of the Channel. And while the latest reports indicate no willingness to break tradition, this fan of drinking wine made nearby will tell you that our time has come, with or without the Royal Family’s cooperation.

In a New Year’s cheatsheet of her favorite Empire State sparklers, Amy Zavatto listed a couple from Long Island and one from the Finger Lakes. “The Finger Lakes region is ideal for sparkling,” Juliette Pope, wine director for Gramercy Tavern, told Zavatto: “Its cold climate is perfect for highacid whites and therefore for sparkling wines, which call for high-acid wine as their base. And Long Island produces some excellent sparkling wines.” (If only Pope were the Royal sommelier.)

In our state’s cool-climate wine making conditions, many vintners are embracing various forms of sparkling wine–suited to cooler climates since sparkling wine grapes are generally harvested at early levels of ripeness. Which sounds sort of like the motivation of winemakers, way back when, in cool-climate Champagne. In the Winter 2011 issue of Edible East End, Karen Ulrich reports that “there are no fewer than 15 Long Island wineries now making sparkling wine. And while most follow the challenging laws of Champagne, where only particular varieties and fermentation methods are used, a handful of wineries, like Croteaux Vineyards and Bouké, are using other methods to get bubbly wine to market faster and often at a lower cost.”

The more local bubbly that’s available, the better it’s likely to be, and the easier it is to find and drink. As for the burgeoning British bubbly industry, Eric Asimov of the Times recently wrote in a travel story that it had a “bright future.” In a related Week in Review piece, Asimov argued that while the locavore pour can be risky and controversial, opinions about food and drink can change rapidly. “The notion of fine English wine may seem as absurd as the thought of fine English food once did. Yet, just as London has become a dining destination, southern England has become a source of excellent sparkling wines, made in the illustrious mode of Champagne.”

In fact, even though the Royal Family will serve certain French wines that were favorites of big time British celeb Winston Churchill, the Queen and all of her children have already demonstrated an allegiance to British wine. At her 80th birthday in 2006, the Queen poured a British blanc de blanc sparkler, not unlike the blanc de blanc produced by Lieb Cellars on the North Fork of Long Island. And the Daily Mail just reported that  “wine made in English vineyards and costing as little as £8.50 a bottle will be served to guests at the royal wedding. . . The decision is in keeping with the couple’s desire to show off ‘what Britain  does best’ in all aspects of the ceremony, from Kate’s dress down to the cake maker Fiona Cairns who began her career on a kitchen table in Leicestershire.”

Sipping on wine from the Queen’s England makes further sense in the case of an Island nation that has demonstrated a large food miles footprint in the case of many things that people put in their mouths, whether green beans imported from Kenya or lamb from New Zealand. Instead, enjoying wine from nearby can help reduce greenhouse gas emissions–although France ain’t really that far from England, and if the cases of Champagne are brought across the Channel by boat, the choice is even greener.

If we had our own New York State royal family–Governor Cuomo and Sandra Lee?–we’d expect them to toast with New York wine, which preserves farmland, creates jobs and generates billions of dollars in business (not to mention lots of pleasure).

Here on the East End of Long Island, we have benefited from a certain inheritance of British cooking tradition. Everything from Bonac clam pie to certain dishes served at the American Hotel in Sag Harbor owe a date to British cooks. So perhaps we can send some advice back in the other direction. If William and Catherine don’t drink British bubbly, hopefully their children will.