Is Katz’s The Best Deli: The Debate 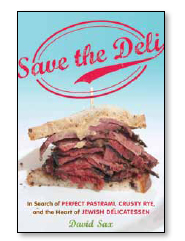 On the pro side is Yura Dashevsky, who’s currently making a documentary on the great Lower East Side institution called “Katz’s: That’s All.” On the nay-saying side is David Sax, author of “Save the Deli”–which we had road food writers Jane and Michael Stern review in our last issue. Sax, naturally, is a Langer’s man. And it is a good sammy, we must say–crusty, chewy bread, thick slices of hyper seasoned meat–though we think there’s room in our belly for both of em.