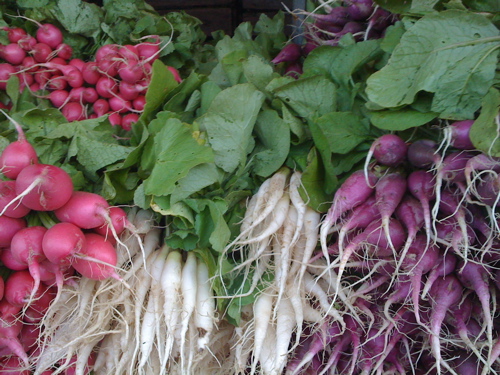 We just got the good word over the weekend that ramps–those garlickey members of the wild onion family–should show up at the Union Square Greenmarket on Wednesday at Mountain Sweet Berry’s farmstand, which means the spring food season has officially begun… if just barely.

(Spring garlic, BTW, is here today at Madura Farm’s W. 16th St. stand, and if you followed the tweets of @UnSqGreenmarket you’d know that, too. )

Still, even though some spots already have asparagus and sweet peas topping their risottos, it’s sadly going to take weeks for real spring produce, meaning the kind grown around here, to come around: Think about the fact that even fast-growing crops like the radishes above take 60 days to mature, and that seedlings and so on are just now getting put in the ground. (Though it’s true you can find a few goods grown in greenhouses or covered rows.)

That’s why we’re really liking the menu for the early spring cooking class chef Mikey Price is teaching Wednesday night at DeGustibus, the sweet little school at the tippy top of Macy’s Herald Square that we profiled in 2008, back when Sal Rizzo took over the reins from the amazing Arlene Feltman Sailhac.

Mikey’s class–it’s called Market to Table, as Mikey is the chef at the seasonally inspired and locally sourced Market Table–does a really good job of capturing the spirit of spring before much produce is available. He’s teaching you how to make house-cured salmon gravlax with horseradish crème fraiche and pumpernickel croutons; a grilled romaine Caesar-style salad with lemon breadcrumbs and Spanish anchovies; pancetta-wrapped pork tenderloin; toasted orzo risotto, and a pineapple-strawberry crisp with grape nuts and mascarpone gelato.

It’s almost as tasty-sounding as the mock spring menu Mikey created for us based on the stories for our fifth issue, including roasted striped bass with ramps, chorizo and clams; herring salad with new potatoes and an asparagus knish with mache salad and shallot vinaigrette. Except this one wins in at least one respect: You actually get to eat it.