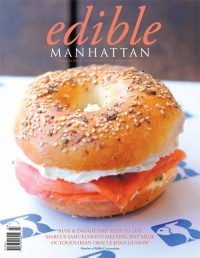 She’s a beauty, that bagel, right? Baked just for the fourth-generation folks who run Russ & Daughters–our brand new cover girl–and topped with their hand-whipped cream cheese and that famous hand-sliced  salmon. It’s the perfect alchemy of smoke and fat, if we do say so ourselves right here in issue No. 10.

You can read all about Russ (and his daughters) in the March-April edition of the magazine, now found in restaurants and bookshops citywide. (Unless you subscribe, which is always appreciated.) But be sure to take a gander at the online version, where we’ve also got a piece about a party at Mark Russ Federman’s Brooklyn home (he’s Russ’s grandson) where the finest minds in Jewish food discuss the history and the practice of appetizing; AND a video of the three-decades-old caviar-packing technique of José Reyes — his hands should be insured by Lloyd’s of London, says Mark — the only Russ & Daughters employee allowed to pack fish eggs.

Beyond the smoked fish, this issue also includes a a few words from Holden Caufield, a peek into the kitchens of Nobel economist Joseph Stiglitz; a profile of food policy matriarch Joan Gussow, an award-winning New York winemaker, the last commercial mushroom farm in the Hudson Valley and the nuttiness of Peanut Butter & Co.; a piece on Marcus Samuelsson‘s early city foraging trips and their role in his most recent cookbook, and last but not least, one of Midtown’s secret snack spots. Hint: Like Samuelsson, it’s also Swedish.