In Long Island Wine Country, One Distillery is Turning a Potato Crop Into Vodka

From spuds, a spirit. 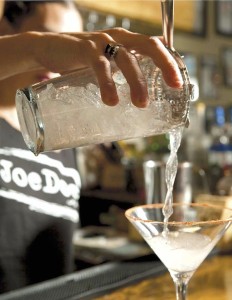 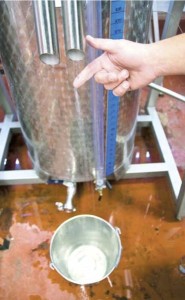 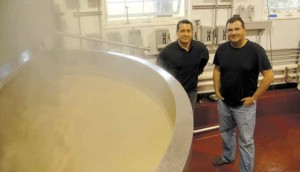 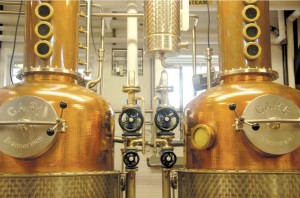 The second-floor balcony of the Long Island Spirits distillery looks due north over 100 acres of potatoes. The fields were first tilled in 1910 by the Columbus family, and while different parties have tended the earth in the subsequent century, spuds have spilled from the earth ever since.

“The Long Island Sound is right over that line of trees,” says Richard Stabile, pointing to a ridge of dark green that borders the field. A hundred years ago, there was a clear view of the water.  “During Prohibition they used to have a light here to give the allclear signal for the boats to bring in their booze.”

Richard Stabile is now the one bringing in the booze. Vodka, to be specific, a liquor all but unknown to the Jazz Age bootleggers, but the benumber of choice for many a modern-day drinker, and a perfect way to transform the local potato crop into liquid gold. He has a long lease on the space, and—keeping pace with the recent resurrection of distilling on Long Island’s “West End,” in the form of Breuckelen Distilling in Sunset Park and Kings County Distillery in East Williamsburg—he has converted the erstwhile barn into the headquarters of Long Island Spirits. The first floor of the handsome, sloping structure is filled with a mash tun, two stills, a couple blending tanks and one-ton sacks of potatoes, each about the size of a La-Z-Boy recliner. Upstairs, under the roof’s distinctive twin cupolas, is a vast, airy tasting room.

Like the barn’s builders, Stabile is a bit of a Columbus himself, sailing into a new world: Out here in the heart of wine country, he has staked a claim for hard liquor. One could call Long Island Spirits the Potato’s Revenge, taking back some of the turf tubers have ceded to the wine vines in recent decades.

“As much as I liked wine, I was more interested in spirits,” says Stabile, an engineer by training. “And I thought I could make a difference with spirits. Long Island’s got the lineage with potatoes. It seemed a natural. I’m such a big potato vodka fan.” (Long Island did see a vodka made from potatoes, called Peconika, back in the late ’90s. But it was distilled in the Midwest, and the end spirit was only 20 percent Long Island potato. The remainder of the mash was Midwestern grain. Peconika is no longer being made.)

He has made a difference. Little more than a blip on the crowded vodka radar in 2008, LiV (pronounced like “hive”) has won critical praise and a sheaf of press clippings that would make Absolut envious. The spirit is now poured at city restaurants, bars and liquor shops Capital Grill, Oceana, Del Frisco’s and Le Cirque.

JoeDoe in the East Village takes its devotion a little further: LiV is the only vodka they carry. “We’re a taste-driven restaurant,” says Joe Dobias, co-owner of JoeDoe with Jill Schulster. “That’s the simplest way to put it. We tried a bunch of vodkas and then we tasted LiV and we never went back. It’s a little different from the Grey Goose and whatever. Plus, we’re both from Long Island.”

Long Island Spirits has become a stop on the tours conducted by Riverhead’s new boutique inn, Hotel Indigo. “When Rich opened Long Island Spirits, I said this was the perfect guy to break up the monotony of the red and white wines,” says Robert Salvatico, one of the partners who erected the Indigo atop the ashes of an old Best Western last August. He makes LiV the final stop on the tour, after visits to wineries like Sparkling Pointe, Bedell, Peconic Bay and Castello di Borghese. “It is the best possible finish. After all that wine, you get a little tired. You have some vodka, it brings you back.”

Time was, vodka meant potato vodka, when most examples of the fiery, clear spirit hailed from Russia or Poland. (As it would happen, Poland was the mother country of the Columbus family, who came to the New World under the name Palumbus). Today, however, the spud spirit has become a rarity. Grain-based vodka is the norm. You can count the domestic potato vodkas on one hand—one is Blue Ice Vodka, from Idaho, of course.

Stabile uses Marcy White Russets in LiV vodka, ironically, not the ones grown in his backyard. He used to deal with several farmers but now sources solely from Ray Kioski, who farms just a mile or two down Sound Avenue. Vodka production runs August through April; during those nine months, LiV works through one and a half million pounds of Kioski’s tubers.

While Stabile hails from Long Island and has always been passionate about wine and spirits, he took a circuitous path to becoming a vodka inventor, working for start-ups and Fortune 500 companies in Boston and California before coming home to pursue his distilling dream. In the early 2000s, while earning his bread developing other people’s businesses, he moonlit in moonshine, taking distilling classes at Cornell and working stints on East End wineries and at a distillery in Kentucky. By 2005 he was ready to put together a business plan, partnering with longtime pal Dan Pollicino, and pouring all his corporate-earned income into the project. (Stabile bought out Pollicino’s share of the business in 2008. They remain friends.) He found the collapsing potato barn and spent a year and a half, and several million dollars, getting the building up to code.

Today the spirits start-up employs a couple full-time distillers and two more people upstairs, but in many respects it’s a one-man operation. Stabile spends a lot of time sorting through potatoes, looking for rocks, and is often on the road, conducting tastings with retail buyers and potential customers. “Half the time I’m in the field,” he explains. “I’m the face of the company.”

The hard work has brought Stabile a long way in a short time.  During the business’s first year, when he self-distributed, driving personally to every store and restaurant he serviced, he produced 1,500 cases of vodka. Winebow picked up distribution in 2009 and his output more than tripled, to 5,000 cases. LiV is now sold and poured in 11 states.

Stabile has additional elixirs in the pipeline. Last spring he came out with Sorbetta, a line of liqueurs using LiV vodka as a base. A strawberry, an orange and a lemon were the first released, with a lime and a raspberry added in the fall. The berries are locally grown, while the citrus is all sourced from a single grove in Florida. A flavored vodka—strawberry, likely—is in the planning stages for this spring. And some time down the road, Long Island may boast its own whiskey—made of local corn and rye.

Another experiment has him playing nice with the local vintners. Down by the stills is a barrel made of new French oak.  Inside, resting for the last year, is a chardonnay from a local winery. (The politic Stabile would not reveal which.) A golden amber in color, it’s a bit hot, but with a lot of flavor and character drawn from the wine; it’s well on its way to becoming Long Island’s first aged brandy.

In fact, there are few categories of spirit that Stabile is not considering. Brooklyn now has its own homegrown gin. How about one for the East End, I suggest. He nods. “There is juniper available,” he notes.