Along with the country’s trendsetting fashion designers, Manhattan is also the birthplace of what’s now de rigueur in any best-dressed kitchen 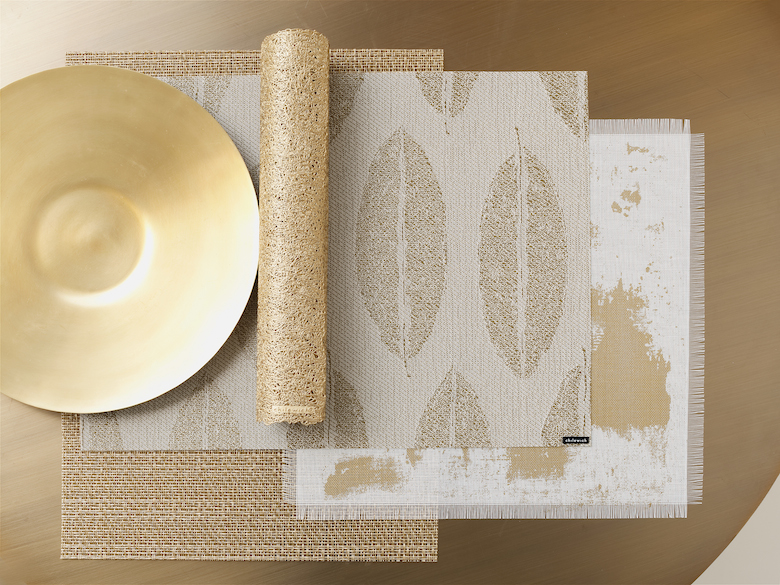 VINYL FOR THE ELBOWS, NOT THE EARS

Technically, textile designer Sandy Chilewich has revolutionized her industry twice. The first time was back in 1978, when she cofounded Hue, a colorful palette of cotton stretch tights that liberated legs from suffocating nylons. The brand lives on, but she eventually left to launch her own design studio near Madison Square Park.

Her gastro game-changer came in the 1990s, when Chilewich began working with vinyl threads woven into fabric that was elegant, durable and washable. “I knew this was it,” says the designer, who started working with an Alabama weaver to produce a line of patterned placemats and table coverings that were easy to wipe clean. Her big break came in 2000, when Tom Colicchio put those mats on the tables at Craft, his then-brand-new Flatiron restaurant.

Seemingly overnight, vinyl vanquished starchy white linens from fine-dining establishments and helped usher in a more relaxed but chic culinary aesthetic: After Chilewich showed up at Craft, says the designer, “everybody wanted it.”

Today Chilewich tableware—including placemats, coasters, table runners and napkin rings—is found nearly everywhere, from the dining rooms of Jean Georges, Joel Robuchon and Charlie Palmer to home tables through retail outlets like Bloomingdale’s—which is just fine with their designer: “I was always driven by a desire for my products to be available to a big audience,” she says. In fact, the company ships 40,000 placemats alone a week, with 40 percent of sales coming from overseas. They’ve expanded into everything from iPhone cases to floor mats.

But the placemats remain the company’s top seller, and Chilewich still seeks out new materials and techniques for them. The latest line includes “Faux Bois”—a laminated digital print placemat that looks like driftwood.

THEY LET US GET A GRIP
If there were a patron saint for frustrated cooks, it would be Manhattan’s own Sam Farber, the founder of OXO and the inventor of those fat-handled, no-slip potato peelers that started the Good Grips line. He delivered us from evil more than 20 years ago with a simple question prompted by the sight of his slightly arthritic wife, Betsey, struggling with commonplace cooking tools: Why, he wondered, do kitchen gadgets have to be so darn flimsy? Farber, a retired housewares entrepreneur—he’d founded Copco—saw an opportunity for a line of ergonomic tools that worked well, whether wielded by young cooks or old, lefties or righties, Democrats or—well, you know.

In 1990, the first group of 15 OXO Good Grips kitchentools—including that peeler—was headed to the U.S. market, and the rest, if housewares shelves are any indication, is history. (With typical function primacy, Farber chose the name because it read the same from any direction.)

Today, OXO is sold on every continent but Antarctica, stocking more than 850 products ranging from spatulas to corkscrews to gardening tools, racking up every conceivable design award and scoring a spot in the permanent collection of Cooper-Hewitt National Design Museum. The company is now run by designer Alex Lee, who joined OXO fresh out of Harvard Business School in 1994, when it was just Farber, his wife, his son, a secretary and a part-time accountant. Now 75 people work in offices that overlook the High Line, often stopping to make lunch together in the company’s open kitchen. “Any excuse,” jokes Lee, “to test products and cook.”

A SPACE SUIT FOR YOUR SANGIOVESE

If the designing duo behind the world’s coolest wine bags and insulated totes don’t use their own products on a daily basis, it’s because John Roscoe Swartz and Aaron Lown usually eat at Torrisi Italian Specialties around the corner from their SoHo offices. That’s where BUILT masterminds its bright line of squishy, lightweight neoprene carriers, which snuggle everything from picnics to iPads to bottles of pinot.

BUILT got its start trying to solve a New York City problem: how to schlep in style. A wine distributor wondered if the pair—who met at the Cranbrook Academy of Art in Michigan before launching their design firm here—could create an attractive-but-useful bottle bag that they could produce en masse. The first draft was a satchel made from Italian leather: It was beautiful and a hit with the wine reps, but didn’t hold mass-market potential thanks to its price tag.

In search of something that could ultimately sell for less than $20, Swartz and Lown eventually hit on neoprene, a flexible, inexpensive, nearly weightless synthetic fabric invented by DuPont in the 1930s and often used in surfing gear. In 2003 they produced their flagship tote, which hugs the bottle like one big shock absorber, protecting your precious prosecco. Just two years after launching the bags, they’d already sold more than a million.

BUILT has since moved on to countless other neoprene creations, stocked in kitchenware stores throughout Manhattan— and across 50 countries. At the core of each product is the founders’ belief that form is as important as function. (“It’s funny how New York really forces that,” says Swartz.) In fact, the soft material is the sole decorative element in their products, and it’s used as a canvas for all kinds of artwork: BUILT is also known for its collaborations with designers such as French Bull and Bathing Ape. There’s one other principle the pair now insist on: accessibility.

“It’s actually easy to design expensive things,” says Swartz of his line of work, “but it has the least impact.” Not for nothing do most chic city holiday partygoers now cart along a neoprene wine bag, rather than a leather satchel.