Like Strawberries, Eggs Have a Season, and It’s Now 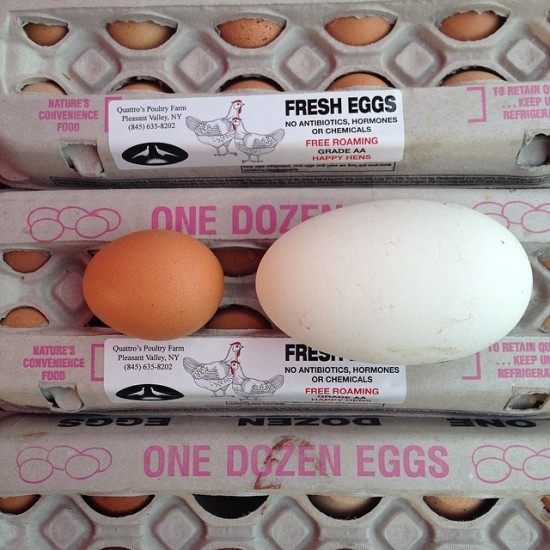 Peas and rhubarb are still weeks away yet one of the first foods of the season is stacked by the dozen at Union Square.

Like a lot of things grown on small farms, eggs at Greenmarket are funny looking. Open a box and you may find they’re all different sizes, some so small they’re lopsided in the carton. The shell may be white, brown, speckled, or even blue-green, depending on the bird that laid it. Greenmarket farmers keep many types of laying hens, including traditional breeds like Wyandottes, Araucanas, Plymouth Rocks, and Rhode Island Reds—birds that don’t lay as often as hybrids but are prized for their eggs’ flavor. Some also raise pheasant, duck, wild turkey, and geese, their eggs ranging in size from one inch tall to four, and in taste from sweet to rich.They’re all absurdly fresh, often laid the day before. As John McPhee wrote of Greenmarket eggs, “a way to get a fresher egg is to boil a chicken with the egg still in it.”

Contrary to the impression you get at the supermarket, eggs have a season. Birds lay eggs in spring, triggered by the lengthening daylight. Keep a dozen ducks and you’ll get a few eggs a week in late March; by April they’ll each lay one a day. Even chickens, bred for high egg production, only lay with ten or more hours of light a day. To trick them into year-round production, factory farms keep birds indoors under artificial lights, a practice so common few people know eggs have a season. But Greenmarket chickens live by the sun, which means a flock that lays a hundred eggs a day in spring might not lay a single egg in a whole winter week. Leaving things to natural light is expensive, as birds still need to eat even when they’re not laying, and a year’s electricity is cheaper than a year’s chicken feed, but as Don Lewis says, “I take winters off, so do my birds.”

But as the days get longer, the ladies start to lay—true marketeers know Spring is announced not by green ramps but by cardboard cartons.

The shell color and size is dictated by bird breed, but diet determines the color and quality of the yolk within. These hens typically dine on pasture and insects, fare which makes for deliciously rich eggs with bright orange yolks. Windfall Farms is known primarily for gourmet salad greens, and that’s what their chickens eat (mustard greens are their favorite), along with oyster shells for calcium. No wonder they sell out, despite their impressive price, and are a favorite of Vogue food writer Jeffrey Steingarten. Small farmers who raise both produce and poultry say they birds love eating vegetables from the field. To protect crops, many have free-range birds but fenced-in vegetables.

Some say the food at Greenmarket is “real,” and that’s particularly true of eggs. Though they’ve long symbolized renewal of life (e.g.(g?) at Easter), finding an egg that could hatch a chick these days is a challenging egg hunt indeed. Industrial egg farms only house hens, and without a rooster, eggs are not fertile. Incubate an egg from the store and you’ll get a rotten egg, but most Greenmarket poultry farmers have some cocks in their flocks, which means the eggs are fertile. Thanks to the magic of hen anatomy, a chicken lays fertile eggs for a full two months after mating. Quattro’s Game Farm’s duck, goose, pheasant, and wild turkey eggs are so fertile that most take six months to make it to market, and when they do they’re fully grown birds bound for the Thanksgiving table. Surplus eggs, not needed for hatching, come to market April through June. They’re perfectly fit to eat, higher in protein and lower in cholesterol than infertile eggs. And unless you store them  in an incubator or under a hen, you need never fear a feather in your shell. Curious which are fertile? Just ask.

A hen doesn’t sit on her eggs until she’s stockpiled a nestful. People have long known that collecting eggs before they accumulate keeps the supply coming, making eggs into what Alan Davidson calls “the unintentional gift from birds to human beings.” Crack one open (which might take some effort – fresh shells are very strong) and you’ll find a hard-to-break yolk that holds its spherical shape, even raw on a plate, and a white so fresh it doesn’t want to spread out.

In deciding how to eat your egg, remember fried and scrambled eggs taste like the butter or oil in which they’re cooked. Poached or boiled, eggs keep their true flavor, and with eggs this good that’s worth experiencing.

If your appetite for eggs is small, go see Jim Grillo of Northshire Farms –he’s been raising quail since he was a boy. Today his flock of 150 lay small, speckled eggs.

“Quail produce a tremendous amount of eggs, they’re very happy birds. A quail will produce 320 eggs a year, far more than chickens,” he says. Kept in a warm greenhouse, his girls have no reason to fly the coop.