The Breadth of Bread at Tipsy Parson: A Parker House Roll begets a Sticky Bun 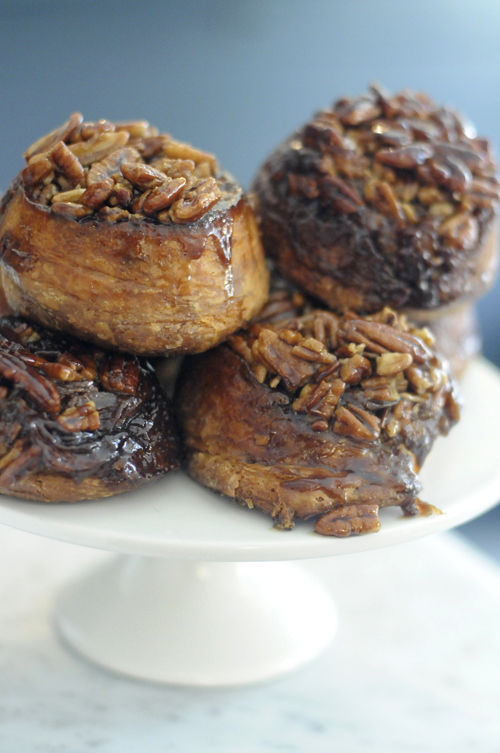 Stuck on You: The Sticky Buns at Tipsy Parson, Which May Not Be Technically Sticky Buns, But Might Still Be the Best Our Photo Editor Has Ever Tasted.

Edible Manhattan’s very first Back of the House column was on the lovely ladies of Little Giant’s quaint and cozy Lower East Side kitchen. Well, Tasha Garcia Gibson and Julie Taras Wallach (the two co-owners; Julie does BOH, Tasha FOH) have since opened anew, this time in Chelsea.

Tipsy Parson–named after a trifle-like dessert of legend–is their ode to homestyle Southern, with a nod to the locavore.

Don’t worry, Little Giant is still in operation, serving their retro-revival deviled eggs (which also appear on the menu at Tipsy Parson) and classic country buttermilk chive biscuits, but at Tipsy Parson, they’ve now brought their baking to new levels. The sweet space’s sticky bun rivals both of our first issue’s Worth The Trip subjects (it was a Balthazar v. Bouchon sticky bun smackdown), and it’s not even a true specimen.

Pastry Chef Melissa Camacho bakes savory loaves, such as her house potato-sourdough, and a young-at-heart sweet stuff like the Monkey Bread made for weekend brunch. But the true base for most of what she creates comes from a simple Parker House roll. (Fun fact: the century-old rill recipe was originally invented at the Omni Parker House Hotel in Boston, which also is credited with the conception of another American classic, the Boston cream pie).

What Camacho does is take the original Parker House recipe and add just enough extra butter (because it makes everything better, of course) to create this tacitly tacky pull-apart pastry. She also bakes a fresh array of muffins, scones, and addictively airy doughnuts to boot.

Those sound like great starters, but you’ll come in for breakfast someday and realize that Tipsy Parson is actually an all day affair, with a wallpapered faux library sitting room in front (which begs to be sat in) and Stumptown coffee to be sipped through lunch and into dinner with or without well-curated nibbles that add to their lively bar scene. In fact, if there was a way to prove that it’s not overly decadent to eat a sticky bun for all three meals, then we might never leave.