Our Springy (and Winey) Issue is Here.

The spring issue is here. It’s not just this cute goat from Catapano Dairy–the cover girl of our just-out Spring issue–that is brightening our moods 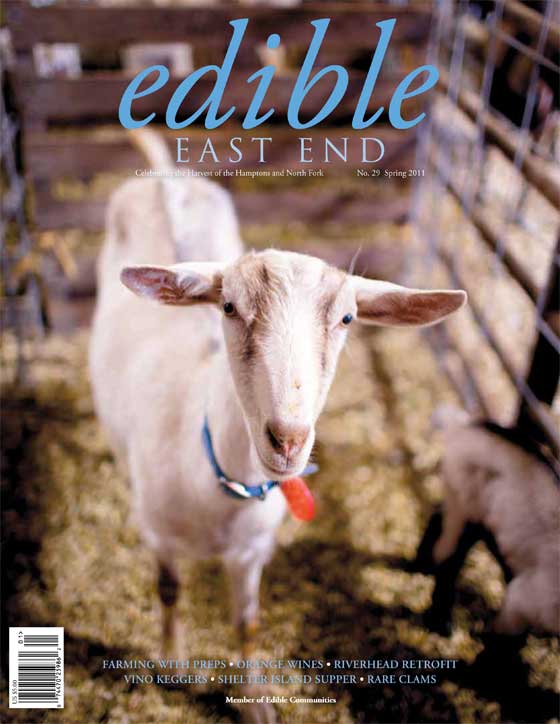 The spring issue is here.

It’s not just this cute goat from Catapano Dairy–the cover girl of our just-out Spring issue–that is brightening our moods. It’s the forsythia, plum blossom, and slowly accumulating GDDs. GDDs is fruit grower lingo for Growing Degree Days, and with daytime temperature now reaching into the 60s (the temperature at which grapevines grow and begin to ripen their fruit) the season-long process of tiny green grapes ripening into swollen, luscious, wine-making input has begun.

Yes, we have wine on the brain. In fact, the spring issue is filled with winey content. As I write in the Letter from the Editor, “In the modern history of the East End, it’s hard to overestimate the influence of grapevines. First planted just four decades ago, wine grapes have now colonized as much acreage as once-dominant potatoes. Winery tasting rooms rival farm stands in many towns. And wine growers are a rejuvenating keystone in our agricultural community.”

There’s a story on a once-dismal Best Western hotel in Riverhead that has been reborn as the Hotel Indigo East End, a mecca for vino-seeking travelers, and a piece on the Riverhead Project, Dennis McDermott’s new restaurant in a defunct Riverhead bank building, locals and wine-sipping weekend warriors will enjoy weekly wine dinners at a communal table.

Precocious Long Island wineries are putting wines in kegs, treating white grapes like red ones (and yielding orange wines that blow wide open our region’s flavor palette), putting up wind turbines and keeping herds of cattle, and even applying to become the first winery on the East Coast with biodynamic certification.

“We are honored to be able to chronicle our wine community, and are grateful for this stalwart base of supporters,” I write. “In fact, the first major event our magazine hosted in New York City was Brooklyn Uncorked, a joint effort with the Long Island Wine Council. This May 10 we’ll celebrate the 5th annual Brooklyn Uncorked (can you believe it?), still held at the Brooklyn Academy of Music, and, more than ever, the place where chefs, sommeliers, wine writers and thirsty novices go to taste the state of Long Island winemaking.

Let this wine-focused issue be a thank you not only to the Long Island wine industry, but to all our advertisers, sponsors and readers that form our very Edible community.”