A Former Banker is Creating a Buzz With Honeycomb Vodka

Award-winning StillTheOne is the first legal distillery in Westchester. 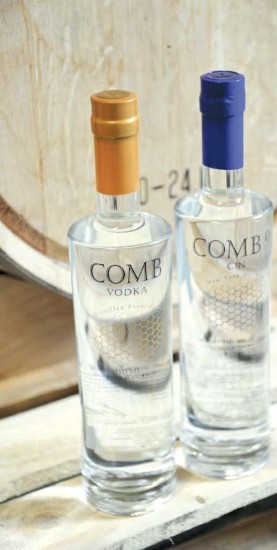 Thirty minutes north of Manhattan, the commuter town of Port Chester is home to a new-ish Batali-Bastianich outpost offering city-style pizza and pasta to the suburban masses. But last summer, when StillTheOne became the first legal distillery in Westchester since Prohibition, the little village began exporting some excellent flavors of its own: vodka and gin made from honey. In a reverse commute to that taken by the Italian eatery, sleek bottles of Comb Vodka and Comb 9 Gin—“comb” as in honeycomb, of course, and nine for the number of botanicals—are in hot demand right here in Manhattan.

Given the quality of Ed Tiedge’s spirits, you’d think he’d been perfecting his craft over a lifetime, but until 2008 he was a hedge-fund portfolio manager with no plans to transition to the booze biz. Tiedge says he was emotionally over the work well before the economic implosion. While navigating the abyss of career change in a recession, he landed on the simple idea of making something people enjoy.

Tiedge had a penchant for homemade wine (which we’ll neither confirm nor deny was made in his basement) but says he never would have gone pro if it weren’t for the fact that the state had just dropped the annual license fee for small distillers from $50,000 way down to $1,500. “Wow, this can be a business,” he remembers thinking.

(He’s not the only one. The slashed fees—coupled with a recession-induced buyer’s market for warehouse real estate—has prompted many a oneman operation to dabble in artisanal, small-batch distilling, spawning something of a local spirits renaissance.)

But Tiedge has a brain for business, and knew that to sell well, his spirits would have to be unique.  His wife, Laura, pointed out that anyone can make liquor but not everyone can make good liquor. (The business would eventually be named for her since, after 26 years of marriage, she is “still the one.”)

After a 10-day course with the American Distillery Institute in California, Tiedge proved to his wife he could indeed develop something good, but rather than lay down their life savings to fund his new venture, she suggested he sell his Porsche. “By then, I hated it anyway,” he concedes. “It was all ego.” Little did he know that liquidating the car was a more direct path to liquor success than he could have dreamed, because a Swiss buyer who inquired about it possessed just the distillation education Tiedge needed.

Under Porsche enthusiast Markus Matuschka de Greiffenclau’s e-mail signature appeared the URL cognac-cognac.com. A few clicks later, Ed learned that the inquirer’s family had been in the wine business for more than 800 years—and was branching into brandy.  Soon enough, the car was sold and Tiedge found himself standing in a distillery in Cognac, France, communicating courtesy of a translation iPhone app.  For the next month, he joined the crew as they got the stills running each morning, broke for lunch and then checked in on the product in the afternoon.

Tiedge filled any empty hours with trips to neighboring distilleries to literally sniff out the competition. The variation astounded him: “They all use the same type of grapes…they all use the same type of stills…their vineyards are right next to each other, yet their cognac all tasted different,” he recently marveled.  The experience impressed upon him the importance of minutiae like yeast-strain selection or precise temperature, and reinforced what he’d learned at the Distillery Institute: that what goes into a still is more important than the still itself.

Back in Port Chester, Tiedge set up two makeshift pot stills.  Eventually he engineered a larger, more conventional copper pot still with a friend, a combination he says works far better than the more-expensive-but-now-idle column-pot hybrid that mainstream distilling made him think he had to have. (At least he bought the small one, he says of the unnecessary equipment.)

From the start, he put his money on honey. A company in Vermont was making spirits out of maple syrup but nothing on the market distilled sweets from bees—plus, he was excited about the floral notes pollen would add to the recipe. But his products aren’t simple solutions of honey-imbued spirits. The secret to Tiedge’s success, basement-brewers, is the mighty fine mead, or honey wine, made right on the premises.

He starts with vats of Florida orange-blossom honey—chosen for the distinct flavor that comes from the flower—which he dilutes with water and impregnates with yeast, fermenting the solution in three steel fermentation tanks for about two weeks before transferring it to the stills a few steps away. Swirled into a glass from the base of one of the tanks, Tiedge’s mead is barely honey-hued, with just a hint of sweetness and a crisp, dry zing reminiscent of a good riesling. But that libation, enjoyable all on its own, is just the beginning; next he makes it into a rough brandy to be re-distilled for an 80-proof vodka and distilled once more with a pouch of herbs to make gin, like a big batch of steeped tea with a buzz.

Despite their sweet beginnings, the finished sprits are very much classifiably dry. They’re clean and sharp—the vodka has only a floral note of sweet-orange blossom; the gin is herbaceous and earthy, thanks to a nine-part medley that includes juniper, licorice, coriander, rose petals and galangal, the Indonesian root that tastes like citrus and cinnamon and looks like ginger. (And, yes, as celiacs might be wondering, with wheat swapped for honey, these spirits are gluten-free.)

The results quickly garnered high praise: Tiedge’s very first batch walked away with the gold medal for unflavored vodka at the International Review of Spirits in Chicago last fall, where it was hailed as “a remarkably clever and deliciously flavorful vodka that will transform cocktails.” City bartenders—a notoriously hard-toplease bunch—quickly embraced both the vodka and the gin.

Xan Garcia, general manager of Stag’s Head, a dark-wooded lodge-style beer bar and gastropub specializing in exclusively American-made beer and spirits—and homey dishes braised in said beer—along Midtown East, is always looking for quality local tipples to join her queue of quaffs, and Tiedge’s gin was an easy addition. She says it brings out the subtle sugar in drinks like the bar’s aptly named Bee’s Knees: lemon juice, honey, mint and Comb 9 Gin. “You get a sweetness on the back end of the taste.  The honey (in the gin) adds sweetness without making it cloying,” explains Garcia, emphasizing “it’s still a gin; it’s not like gin with a little honey mixed in.”

The esteemed spirits sellers at third-generation Park Avenue Liquor Shop in Midtown say Comb spurred a rare fervor in the store when it was first released. Tiedge had come in by himself, telling his story and offering a taste. Eric Goldstein, who owns the shop with his father and two brothers, says, “It was just one of those moments, like, ‘You gotta taste this.’”

But perhaps the ultimate accolades came from the very first place to try Tiedge’s nascent spirits: Blue Hill at Stone Barns.  General manager Philippe Gouze and sommelier Thomas Carter were so impressed that they placed orders for both the gin and the vodka.

“We immediately recognized it as a great spirit—and made friends with him at the same time,” says Gouze, noting that the encounter reminded him of his discovery of Tuthilltown, back when the Hudson Valley whiskey made its debut.

While visiting Tiedge’s tiny distillery, Gouze was inspired by the botanicals that enhance the gin. “We started thinking about the herbs and honey available to us from Stone Barns,” says Gouze of the working farm the restaurant calls home, and proposed they collaborate on a signature spirit. Just before fall’s first frost, Gouze provided Tiedge with sassafras, basil, green coriander seeds, honeysuckle, cardamom leaves and, of course, honey from the Stone Barns hives; within a few weeks it will be on offer at both the farm-based restaurant and its city sister. “We’re waiting… impatiently,” laughs Gouze.