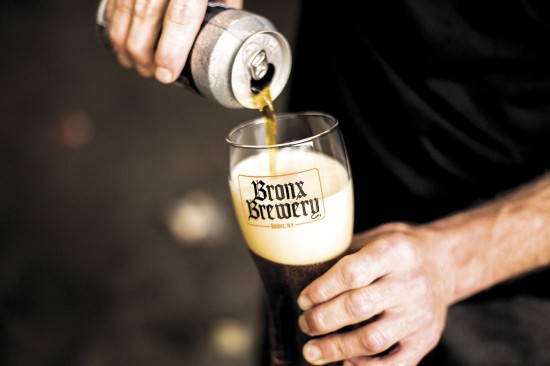 To meet the artisans behind an exciting new line of locally crafted booze, I didn’t drive through rolling Long Island vineyards or pull up to a gleaming distillery overlooking amber waves of upstate grain. Instead I took the 6 train three stops up to the headquarters of the Bronx Brewery.

The South Bronx setting offers no sweeping bucolic vistas to inspire notions of liquid romance. On my recent morning visit, I trudged through an industrial landscape to 856 East 136th Street. Train tracks and highway overpasses pounded and rattled above, while graffiti adorned the passages below. A large, open garage door revealed a fleet of hot dog carts being loaded (so, that’s where they come from). Day laborers dotted the breezy corners, hands shoved into pockets. Rows of barbed wire had caught plastic bags in their teeth. And, there, across from Tuck-It-Away Storage, lay the storefront that will soon house the Bronx’s first brewery to open in the last 50 years.

Since the earliest European settlement, beer has been brewed in New York, and for much of the 19th century, our state boasted one of the country’s busiest brewing regions. New York City, especially, was awash in beer and by the turn of the 20th century had nearly 80 breweries in operation. Helmed mostly by German, English and Dutch immigrants who brought their brewing skills and beer styles to our shores, New York became a flourishing beer scene. In 1900 the Bronx alone counted seven breweries within a 20-block radius, drawn here by the hilly landscape near Franklin and Eagle Avenue, where brewers would tunnel underground and store (or “lager”) their beers in the cool caverns. But prohibition changed everything, precipitating the death of small-batch breweries and then the post-repeal rise of national brands that flooded the market with mass-produced beer. And while New York City has seen a recent resurgence of craft breweries, the movement hasn’t hit the Bronx. In fact, no one has brewed here since Rheingold shuttered in the 1960s. Until now. 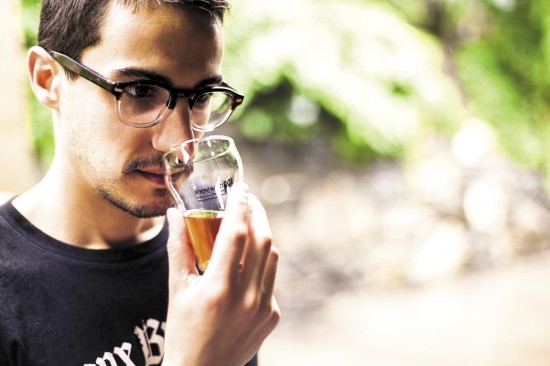 Chris Gallant, an MBA from MIT, was focusing Heineken’s Caribbean strategy when he heard about Bronx Brewery. Visiting, he was impressed with the team’s entrepreneurial vision, their passion for the Bronx, and their beers. “After our first meeting,” he says, “I was in.”

In 2009, after a stint playing minor league baseball and then selling a successful Internet start-up, Bronx native Stephen O’Sullivan found himself at an impasse. He’d touted the borough’s virtues while on the road playing ball and wanted to give back to the place he loved. But how? Then one day, it hit him like a fastball.

“The idea of a brewery came to me,” recalls O’Sullivan. “And to my surprise, I learned that no one was doing it in the Bronx.” He quickly formed an LLC and called upon his lifelong friend, Ireland- native and Bronx-bred Niall Henry, to help put it all together. Henry spent a lot of time in the bar industry and knew he could help forge valuable connections (read: suppliers and, more importantly, investors, in addition to their own ponied-up cash). Their first task was finding a brewmaster, so they looked to the best brewing school in the country: UC Davis. Enter Damian Brown.

A Virginia native with a Yale degree in political science, Brown had spent two years as a paralegal working with migrant farm workers in the Southeast before changing course and becoming an assistant brewer in Alexandria, Virginia, and deciding to go pro by enrolling in the UC Davis Master Brewers Program. When Steve and Niall contacted the school to pluck from their talent pool, a teacher introduced them to Brown, who was instantly interested. Several e-mails and phone calls later, he was on his way to New York to get started.

He quickly proved himself. “We didn’t yet have a space,” says O’Sullivan, “and I remember brewing with Damian in a warehouse somewhere in Yonkers that didn’t have heat. I kept thinking, ‘He is a freaking genius, and can make great beer anywhere.’ ” But the team was still not complete— O’Sullivan and Henry still needed someone to run the business side of the operation. 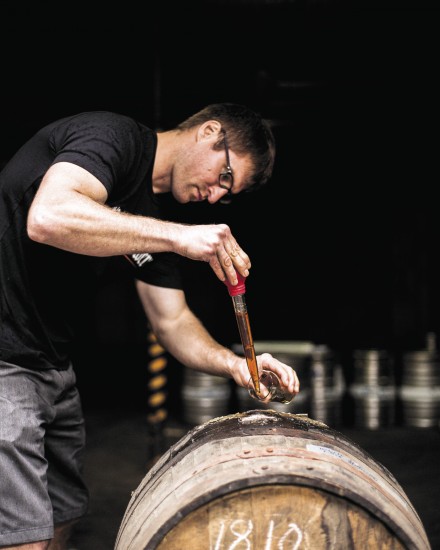 Chris Gallant, a Boston boy who holds an MBA from MIT, was doing acquisition work in Brazil, focusing Heineken’s strategy in the Caribbean when his wife, a Yalie alum, read about the project through a Yale online forum. Intrigued, he contacted Damian from Brazil, soon flew home to meet him, and was impressed with the team’s entrepreneurial vision, their passion for the Bronx, and the beers they had lined up. “After our first meeting,” he says, “I was in.”

Today Gallant handles the business aspects while Damian oversees the brewing and operations. Steve, who now lives overseas as a diplomat, credits the duo with making the Bronx Brewery vision into a reality. “It’s their baby,” he says.

Early on, they considered the economics of brewing in a megalopolis and asked themselves how big
they wanted to be. “We could have gone the nano route,” says Brown, “stayed tiny, and built a system capable of producing 10 kegs a week, but we elected to produce beer at a volume which allowed us to get more visibility.” So, before launching in September 2011, they formed a “tenant brewing” relationship— where one rents space from an existing brewery— with Cottrell Brewery in Pawcatuck, Connecticut, where they brewed their signature Bronx Pale Ale, producing up to 1,500 barrels a year.

While some brewers come out of the gate with a number of offerings, Brown and Gallant looked at the success of craft industry greats like Sierra Nevada and Brooklyn Brewery, who established their names with single, flagship beers—the Sierra Nevada Pale Ale and the Brooklyn Lager. For year one, Brown and Gallant ran the operation by their bootstraps. Using a former Red Bull truck, they self-distributed up and down Manhattan. “It was often eight to nine hours a day of delivering kegs,” says Gallant, “but it allowed us to personally meet all of our accounts.”

Chris Giudice, owner of George Keeley’s on the Upper West Side, remembers his first taste. “The pale ale is straw golden in color and very unassuming. But with your first sip, you get a full nose of hoppy goodness, followed by a subtle, bitter end. It’s one of New York’s great pale ales. I also love,” he adds, “that it’s happening in the Bronx.” 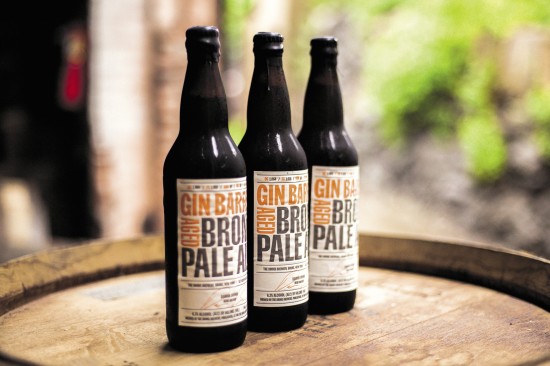 Demurely hoppy, with a sufficient malt backbone to ground it, the beer is a study in balance. Brown calls pale ales “a great vehicle, a showcase for different malts and yeast.” Two years in,
they’ve added additional incarnations: a rye pale ale, a black pale ale and a Belgian pale ale. They’ve also embarked on an ambitious barrel-aging program, and have nearly 20 different types of barrels in play that previously housed some of the following liquid tenants: bourbon, rye, zinfandel, pinot noir, gin, tequila and mezcal.

But the biggest news is their new headquarters. After building the business one barrel of beer at a time, the project’s founders are nearing completion of a bigger dream: the opening of their sprawling new headquarters, complete with tasting room, in the Port Morris neighborhood of the South Bronx.

The massive 8,000-square-foot space is layered with history; a former iron works building, and at
one time, even a lace production facility, it has 25- foot ceilings and an additional 5,000 square feet of outdoor space (hello, beer garden!). Walking through it, weaving around decades of clutter that was still in the midst of removal, Gallant’s childlike enthusiasm is infectious. “As soon as I walked into the warehouse, I could picture exactly where the brewhouse would go, where the cellar tanks would fit, how the taproom would be set up—everything clicked,” he raves. “It was perfect.”

Due to urban land values, city-based brewers have long made bigger-batch brews off-site (Brooklyn
Brewery and Sixpoint, for example, each make several beers outside the city, to allow for greater production.) So, too, the Bronx Pale Ale will continue to be brewed out of state. But they’ll make smaller, more creative batches on-premise. 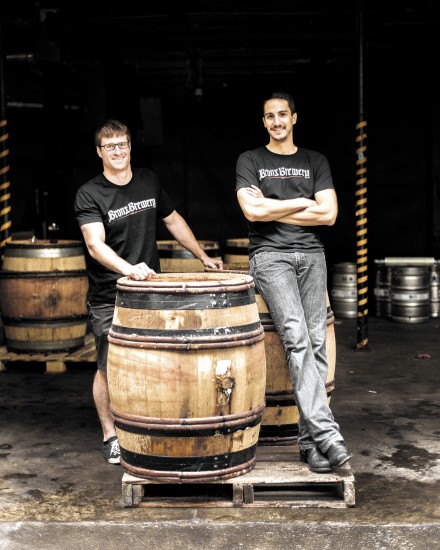 Brewmaster Damian Brown, far left, studied political science at Yale before enrolling in the UC Davis Master Brewers Program. He knew craft greats like Sierra Nevada had launched with single, flagship beers and set out to do just that with Bronx Pale Ale.

By year’s end, the space should be completely transformed to house a taproom, a state-of-the-art 20-barrel production brewery, a canning line, a large format bottling line and that outdoor beer garden. They’ll soon be producing up to 3,000 barrels onsite. Massive windows that were long ago covered by brick will once again see the light of day, bringing sunlight to a space that for far too long has seen only darkness and the sterile wash of fluorescent lighting. And the Bronx will once again have a brewery to call its own. “Working in the Bronx has been an adventure,” says Damian. “It’s raw, dynamic, and a lot of change has come to the South Bronx recently, with new ideas and new companies. There is a lot of pride here, and the people from here, usually stay here. And that unique sensibility makes it exciting.”