The ecologist and the actor consider seafood. 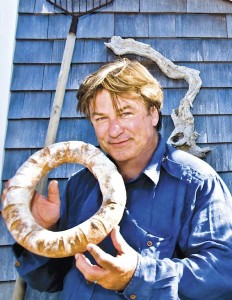 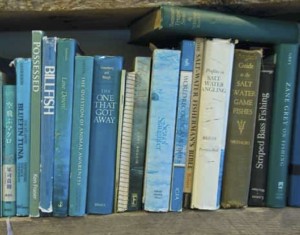 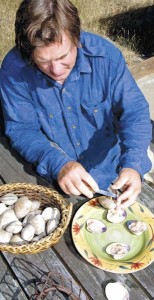 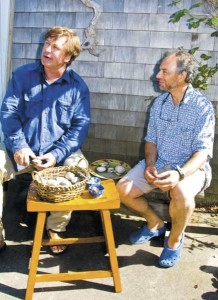 It was supposed to be a discussion akin to Fishing with John, the 1991 television angling series by artist John Lurie that featured rambling waterborne discussions with Jim Jarmusch and Dennis Hopper. But time was short, and cranking the outboard for a few hours of porgie-spotting with marine ecologist Carl Safina and actor Alec Baldwin—both of whom grew up in Long Island—seemed excessive. Plus Baldwin was keen to hear a firsthand report about the oil-stained Gulf Coast from Safina, one of the country’s foremost experts on eating from the ocean, who had just driven a boat into waters patrolled by BP and the Coast Guard.

So, over a table adorned with the morning’s market bounty, the grilling—of Baldwin and Safina, that is—began. Baldwin, whose philanthropic work includes animal welfare and efforts to save farmland on his native landmass, began rapid-fire questions about the BP disaster: “So a boom literally absorbs the oil?”

“It can block it or absorb it,” Safina explained. “But that works on the principle that oil floats. And dispersants dissolve oil, so it doesn’t float.”

Breaking a petite tapered baguette, Baldwin asked why Gulf residents weren’t “apoplectic.” They are, Safina replied, but the payouts—to fishermen, to oil industry employees, to tourism operators—are calibrated to “to keep a lid on the explosive rage.”

Baldwin’s appetite for information is voracious. He was impressed that Safina has caught and eaten striped bass and bluefish from the East River and fascinated to learn that squid, including the millions of pounds caught by the Montauk fleet, is among the most abundant seafood choices. His questions for Safina included: “What’s your opinion of the lobster ban?” (Safina: “A ban seems draconian”); why the DEC had prevented nearby Marie’s Fish Farm from releasing flounder they’d grown (Safina didn’t know the circumstances); and “What’s the good news?” (“Striped bass is the best-managed recovery of a fish in the world,” replied Safina, crediting rules “designed around letting females breed before you keep them.”)

Together they reminisced about the local seafood of their youths. “Flounder. Flounder. Flounder,” Baldwin sang out, pushing back from the table. Safina nodded, recalling the tuna gold rush that used to hit in September and October, when big schools swam within a mile or two offshore and that rare red flesh showed up even rarer at sushi parties of those in the know. They made plans to go fishing together on Safina’s boat.

But both men have friends who have been crippled by mercury poisoning from sushi—a curse of our culture’s coal habit—and the conversation quickly turned to what they don’t eat. “No tuna, no salmon, the bigger fish and farmed fish,” said Safina, who also avoids longlines—those indiscriminate baited lures that are particularly destructive. Instead he favors bonito, mackerel, octopus, shellfish and that squid.

Baldwin’s also a conscientious consumer. “I haven’t eaten beef since 1991,” said the actor, who supports PETA and recently helped promote a fund-raiser for the vegetarian organization Physicians Committee for Responsible Medicine. “I have no appetite for pork or beef at all. I eat fish and eggs. I love fish, but I have been mindful of information I have gotten,” he nodded toward Safina. “I eat less than I used to. The bigger the fish, the less you want to eat.” (Safina agreed, plugging Blue Ocean Institute’s sustainable fish iPhone app.)

In fact Baldwin would relish the chance to help open American eyes to our food-related folly. “About 10 years ago, I pitched a show to PBS and Discovery, a series on the history of food, the politics of what’s on the shelves. School lunches. Subsidization of beef. Chemical farming.” He quoted the closing scene from Three Days of Condor when Cliff Robertson feeds quixotic Robert Redford a dose of Malthusian dire: “‘Today it’s oil, right? In 10 or 15 years, food, plutonium. Maybe even sooner. Now what do you think the people are going to want us to do then?’”

Suddenly someone remembered the two dozen clams. Baldwin fearlessly plunged into the task of prying a few open, albeit unsurely. “It’s been a long time,” he said, his diction tinged with an Island accent. (“Howaya,” he’d said upon meeting Safina.) After a short refresher course—“push the entire length of the blade between the clamshell’s lips,” Safina instructed—Baldwin unlocked a dozen in short order. They were excellent, if a little big for eating raw.

“The best way to describe my relationship with local food is to jump-cut to a restaurant in Montecito in December,” said Baldwin. “The waiter was talking about a special on lobster, and I said, ‘Really, you don’t understand. I eat about 800 lobster rolls over a four-month season.’ I’ll wake up and eat a whole quarter of a watermelon for breakfast.” Baldwin also devours the Jersey Silver Queen corn that shows up in early summer, and the Long Island ears that follow. “You wait until September because it gets better the later it is. Don’t you agree?” he queried his host. “I’m a corn-iac.”

When Baldwin’s not out on Long Island scoring ears, he’s in the city bringing home the bacon, and meals have to make room for work. “Whether I’m sitting down to an eggplant Parmesan hero or Settomezzo for dinner,” said Baldwin, “it’s all about time. Eating becomes an impediment to working. It slows you. You can’t eat a big meal and then do a show.”

He gets his caffeine fix at Oren’s Daily Roast, though he almost bought an apartment south of Gramercy just so he could live near beloved bean bar 71 Irving Place. He adores the garden omelet at Sarabeth’s and often sates himself at Via Quadronno. (“Uhh,” he said, casting his blue eyes skyward in ecstasy: “The arugula with carpaccio tuna.”) But while heavy food is a nonstarter, he leaves room for dessert (“When Café des Artistes burned down I didn’t ask about the staff or cooks who lost their jobs. I said, ‘God, no more praline ice cream cake.’ It was the best dessert in Manhattan”); his body is a temple, not a monastery— especially after taping Saturday Night Live: “Then we go to Nobu 57 and be noisy.”

A good many of Baldwin’s meals are downed at SilverCup Studios in Long Island City, where 30 Rock is taped. “On the set, they feed us breakfast and lunch. Sometimes, the whole crew will say, ‘Wow, filet mignon for lunch!’ Other times it’s ‘Tacos. Oh gosh.’” The crew feeds constantly because they are on their feet all day. There’s coffee up the ying yang.” He’s developed a love-hate relationship with a chef named Angel: “She’s an Italian-American from Staten Island. She bakes trays of chicken Marsala, baskets of Italian cookies. I have to avoid Angel at all costs.”

Except for her eggplant Parm heroes, perhaps Baldwin’s death-row food choice. (And possibly fodder for the 30 Rock “Sandwich Day” spoof featuring the handiwork from a far-flung shop in Brooklyn: “No one knows what it’s called, or where it is,” Baldwin’s character intoned. “It’s a Teamsters secret.”)

If his last meal weren’t the Parm, one imagines he’d choose Long Island seafood. As Safina described a fishing trip from last fall, Baldwin was moved to speak almost in haiku: “When you go out on a boat. And catch fish and eat it. That’s awesome,” he pronounced.

And of course, he had one more question. It concerned that ubiquitous Mediterranean-farmed sea bass; Baldwin was considering penning a send-up for the New Yorker: “How many times have you heard, ‘well, we have a very nice branzino tonight’?”

Safina could explain how it was raised, but not how it tasted. “That’s perfect,” Baldwin said with a guffaw and pat on his host’s shoulder. “‘What do you think of branzino?’ I asked the oceanographer: ‘I’ve never had it.’”