The show follows a manic monger to lactation destinations across the country. 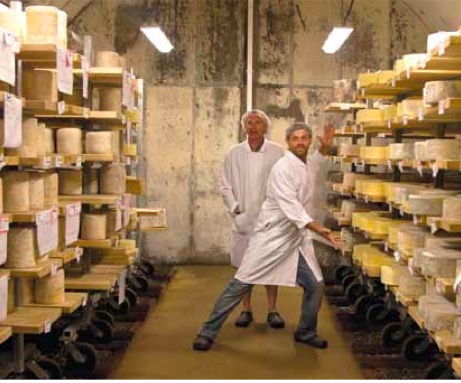 Chasing cheese makes for some wickedly zany moments when Jason Sobocinski gets in front of a TV camera. The 33-year-old maitre fromager gleefully takes viewers on a gastronomic journey to find fine curds in his new Cooking Channel show, “The Big Cheese.”

It’s a name he’s rightly earned. He knits his brows, wrinkles his nose, purses his lips, crinkles his eyes and otherwise hams it up while touring livestock pens, cheese caves and restaurant kitchens, even plodding through snow to join farmers in the milking parlor before the morning light creeps above the barn weathervane. This is a man on a mission—to spread the good word about curd.

Take the theme-song lyrics: “I like my cheese on a slab of bread, with whiskey or a beer instead. I want a belly full of curds,” and then the refrain kicks in: “I want cheese with my cheese.”

Wherever he goes, he packs his outsize personality. He relishes the amalgamation in a grilled sandwich starring many cheeses, the way jam marries so well with strong cheeses and the popularity of his panini of prosciutto, fig preserves and Taleggio on ciabatta. He winces upon tasting unseasoned goat cheese, exclaiming, “It pows you in the face”—once he’s able to relax his cheek muscles. (After the cheesemaker salts the chèvre, Sobocinski tastes again and beams: “It’s a different cheese. The transformation is unbelievable.”) And throughout it all, his lexicon is peppered with words like “stinky,” “crispy,” “guttural,” “bloomy,” “oozy” and “goozy”—not quite Masterpiece Theatre script.

Currently completing his master’s in gastronomy at Boston University, Sobocinski feels that in introducing viewers to the people behind real cheese, he offers an intimate look at a culture— and at what defines us all. Each segment is a socioeconomic, anthropologic, gustatory exploration.

You’ll wish you could follow in his footsteps, but viewers not ready for a life on the lam get the next best thing: When he lifts a wedge of Point Reyes blue cheese to his nose and it’s smelling of mushrooms and the forest floor, you can almost taste it.