The Swedish Church hits us in the sweet spot with housemade cinnamon buns. 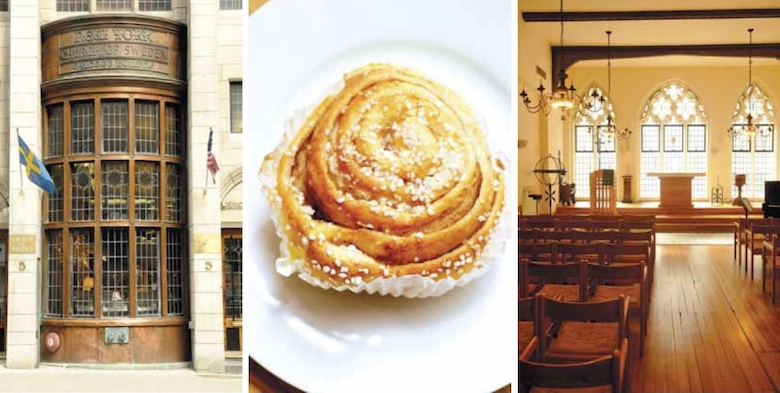 Midtown’s best-kept international snack secret may be not the Korean fried fish at Kim’s Aunt Lunch Cart, nor the Bukharian bread at Taam-Tov-though both are worth a trip in the otherwise corporate neighborhood. Instead, our lunch money is on a sweet treat served up in a Swedish space: The housemade cinnamon bun at the tiny library café of the Swedish Church, which took over the beautiful New York Bible Society building in 1978.  In Sweden, the tradition of afternoon coffee and sweets is on par with tea in England, explains Leana Fleischmann, the church administrator (“I can’t bury anybody, I can’t marry anybody, but I do everything else,” she says). And the cinnamon bun, or kanel bulle, in Swedish, “is sort of the way apple pie is to Americans. It’s our little thing.”

So it makes sense that the church-or Svenska kyrkanon, if you’re Swedish-whose lovely high-ceilinged first-floor reading room serves as a gathering spot for city Swedes, serves both every day. (They also offer hard-to-find Swedish candies and a handful of open-faced sandwiches called smörgås, like anchovies, dill and eggs on dense brown bread for $2.50).

Served on a tiny Scandinavian-style tray, the Swedish Church’s coffee is brewed from fair-trade Colombian beans packaged just for the congregation, and their soft, cinnamon-scented $1.50 buns are topped with crumbly sugar crystals, baked in paper cups and, if you like, briefly heated in the microwave.

For more than 10 years they’ve been made by Monica Lee, the church’s cleaning lady. Other members of the congregation have tried their hand at the fundraising buns, but Fleischmann admits few have Lee’s touch. “Not everybody has it in their hands, and you can taste it, that it’s just not the same feeling,” she says. In between her sweeping and scouring duties, Lee has twirled up 700 to 900 of the bulle a month in the church’s little kitchen, along with a special annual Lenten version called semla, available this year throughout March, perfumed with cardamom and stuffed with marzipan.