At Union Square Café, Making Over the Martini Formula

Union Square Café’s choice of gin and a proprietary vermouth make for an unconventional riff on the classic cocktail. 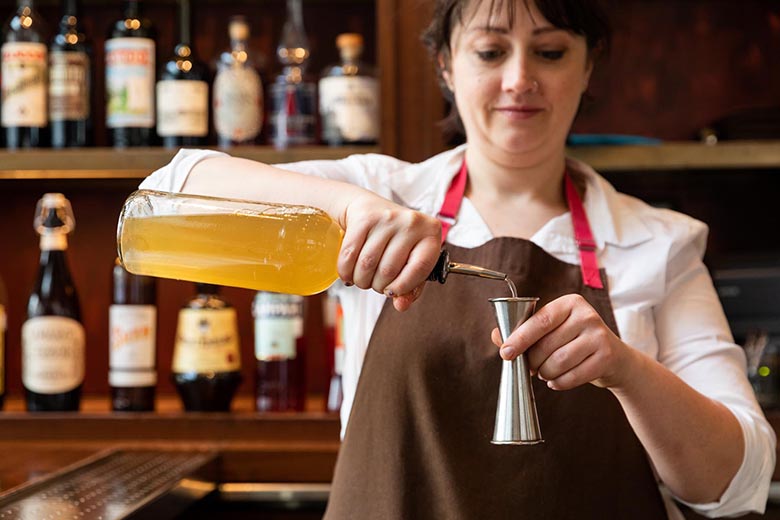 Innovating a formula that’s been around and virtually unchanged since the late 1890s? It’s great the way it is and always has been. And yet, the conversation isn’t over.

When thinking about the future of the cocktail, is there a place for the martini? Innovating a formula that’s been around and virtually unchanged since the late 1890s? It’s great the way it is and always has been: A drink that’ll make you sit up a little straighter, a drink associated with the reckless abandon of ordering them for 25 cents a piece at a New Orleans lunch, the drink of classic British secret agents (by the way, Mr. Bond, you ought to try it stirred), the drink that Dorothy Parker sipped after delivering zingers at the Algonquin Hotel. A drink of bracingly strong character. Spirits historian David Wondrich calls it the “ark for the whole idea of the classic Cocktail,” and yet, the conversation isn’t over.

In short, it’s an institution, but that hasn’t stopped it from treatments that slide from transcendent (the sweet-vermouth-and-maraschino-spiked Martinez) to decadent (the Chocotini). 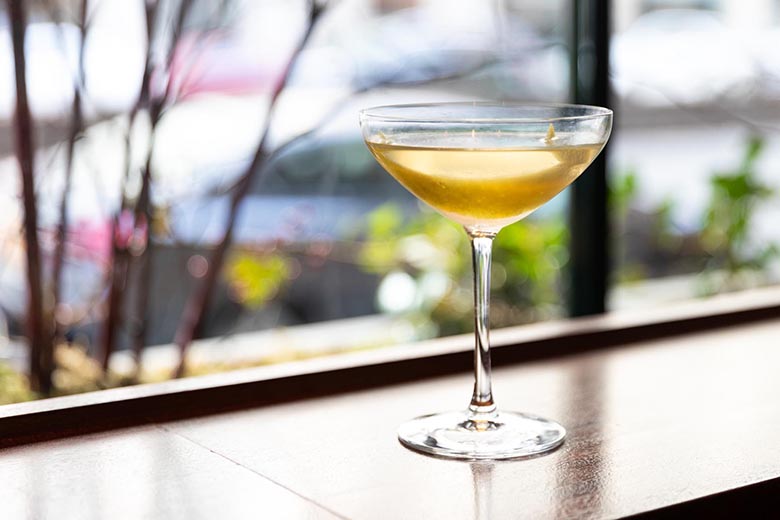 A drink of bracingly strong character. Spirits historian David Wondrich calls the martini the “ark for the whole idea of the classic Cocktail.” Above: Union Square Café alum Jess McGlinchey, now trailblazing as a spirits entrepreneur.

At Union Square Café, the three-ingredient cocktail is directing the conversation toward a better future. While the restaurant doesn’t date to the early 20th century, it’s an institution much like the martini, and their take with an unconventional gin and proprietary vermouth is showcasing a completely different way to look at building a classic martini. And it’s definitely going to make you sit up straight.

Since reopening in 2016, the bar program at Union Square Café has been appreciating bottles that showcase agriculture and the unbridled selection of New York–based spirits. It’s also been tinkering away with tinctures and infusions in the basement and concentrating on reducing waste at the industry level. At the forefront of all this mad science is Jess McGlinchey, who has recently left the restaurant to pursue a future as a spirits entrepreneur.

Read more: This Harlem-Based Vermouth Is Growing a Cult Following 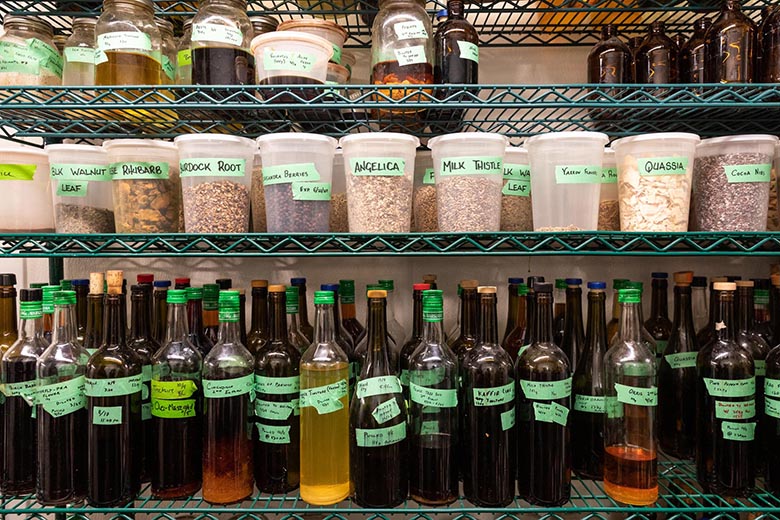 To make the vermouth that goes into their house martini, McGlinchey and the beverage team use flat sparkling wine as the base. When an open bottle of bubbly goes flat, it’s fortified right away, then cooked for an hour with 13 different botanicals and cooled in an ice bath.

Vermouth isn’t the only way the bar team utilizes what would otherwise be tossed. Old artichokes go into amaros for a vegetal and bitter post-dinner drink, and aquafaba (that viscous liquid formed from soaked chickpeas) substitutes as an egg white for sours.

What’s really cool about the vermouth is McGlinchey’s mathematical approach to making a lot with a little. She built a formula sheet on a computer where a bartender can input any quantity of flat wine’s weight and know exactly what ratio of sugar, botanicals and fortified spirit to add. More importantly, it’s keeping waste out of the drain and giving it a new life as an aromatic vermouth—the salt and pepper to a good spirit.

For the martini’s gin, the bar team reaches for Neversink, a Port Chester–based spirits company making a New York–apple-based gin. 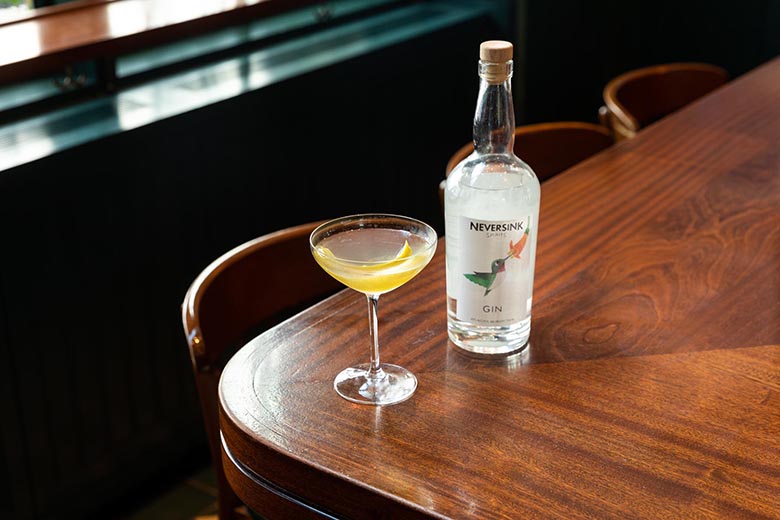 For the martini’s gin, the bar team reaches for Neversink, a Port Chester–based spirits company making a New York–apple-based gin.

Neversink first started out making apple and pear brandies in 2015, with childhood friends and Brooklynites Yoni Rabino and Noah Braunstein bonding over their love of local ingredients.

“We grew a taste for fruit spirits,” says Rabino. When Neversink started developing a gin, Braunstein and Rabino started off using a traditional grain base with equal parts apples. And while it was good, the two had more visionary goals. 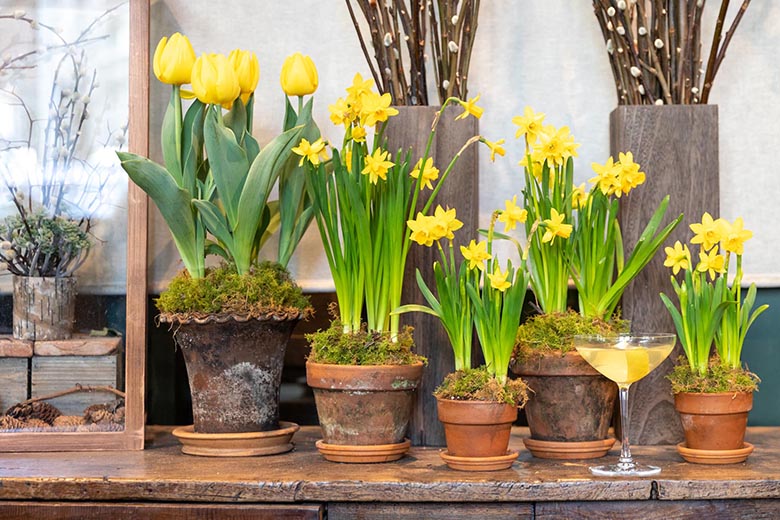 Thanks to unseen ingredients and methods, the future of Union Square Café’s interpretation looks bright, crisp and best served in a coupe glass.

“We wanted [the gin] to be 100 percent apples from the beginning,” says Rabino, who in past years has formulated the gin to be now completely made from apples.

Neversink’s gin is now a true New York spirit, and at a time when the craft distilling market is saturated with producers, it’s quite unlike any other, with a cinnamon-orange flavor that makes it a great match for McGlinchey’s vermouth method.

Which brings us back to the polished and bright bar at Union Square Café, where a martini seems like a right fit for an iconic restaurant. Thanks to unseen ingredients and methods, the future of their interpretation looks bright, crisp and best served in a coupe glass. Brace yourself.