How a trial lawyer from Miami became a vaunted Long Island vintner. 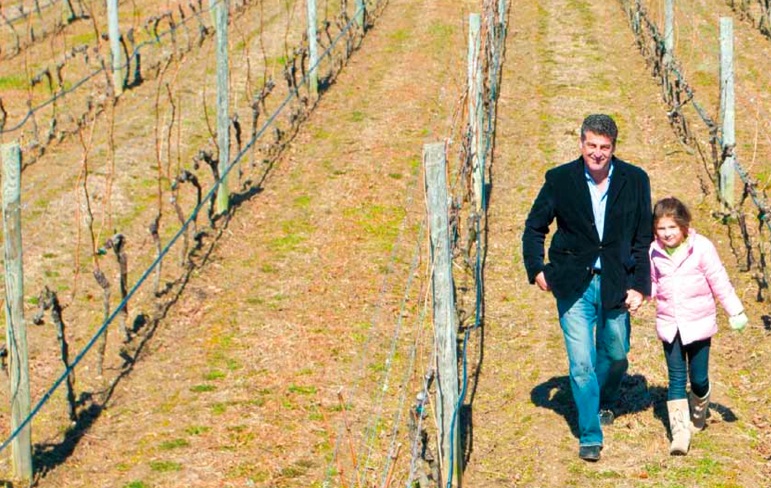 Mark Tobin’s path to exalted winemaker status—his 2005 Mattebella Old World Blend was just awarded a coveted 90-point rating from Wine Spectator—is a story of love: for his wife, Christine; for her welcoming Westhampton Beach family (who’d made wine in their garage); and for a single, life-changing bottle of 1993 Lenz red.

“That ’93 blew me out of the water,” recalls the Miami native, a former trial lawyer who’s long called Eastern Long Island home. “It was the house wine at the Jamesport Country Kitchen. I’ll never forget it—I went there and had a chicken potpie, and they had this [wine] on the menu, and it freaked me out. I bought the whole case from them—took the whole damn thing. A wine from Long Island!

I just kept bringing it to the finest sommeliers in the country and stumping the hell out of it. I took it to Miami, to New York; I kept showing up with brown bags with this wine in it and everybody swore it was Old World—and that was instructive to me.”

From there, Tobin likes to say, he made a whole bunch of bad wine. “I went around and met the winemakers, including Eric [Frye of Lenz] and many others, and they were extremely gracious, not competitive, and very compassionate. I’d bring cheese and crusty bread and taste with them and bring the wine I made in my garage. We’d laugh about it and they’d give me tips and I’d go back and make mistakes and make it better.  And then I pulled the trigger in ’05 and bought a vineyard.

Jamesport Vineyard’s Ron Goerler tipped him off that a vineyard called Silver Nail, in Southold, was up for grabs. “I definitely now understand the criminal defense of temporary insanity,” laughs Tobin. “At first, my wife and I had made the decision that we were going to plant, because when you buy someone else’s vineyard you buy their mistakes, but then we found this through Ron, whom I tremendously respect. He helped us make our wine at first, and we got started.”

Today, Tobin oversees the winemaking of the 1,500-or-so-case operation, but brought in winemaker Miguel Martin from Palmer Vineyards to consult. “I’m the winemaker and make all the calls, but I’m just smart enough to know that it’s important to surround yourself with people who know more than you do, and Miguel is a great winemaker.” Christine oversees the vineyard management, which both she and Mark are very passionate about maintaining with as low an impact on the soil as possible. They use no herbicides.  If they have to spray for black rot and powdery mildew, they use organic kelp. Liquid fertilizers are limited to an eco-friendly fish emulsion. “People may call me and my wife insane—which they’d be entirely correct about—but our goal is to make European-style, food-friendly wines by strictly sustainable viticultural practices. And for value.”

Turns out it works. In addition to that lauded Old World bottle, Tobin makes a great everyday bottle called Mattebella Famiglia Red, the one to savor with the simple-but-sublime meal of your own fire-escape-grown herbs rubbed into a lamb chop or a red sauce studded with the Long Island littleneck clams you scored at the Blue Moon Fish stand on your pre-work Wednesday morning stroll through Union Square.

And that’s what this wine makes us think about when we swirl and sniff and sip it, so full of demure, elegant black fruit and other classic Bordeaux-blend aromas—blackberries, black currants and fresh tobacco—along with that “how do you put your finger on it?” Long Island typicity, which can only be described as that aroma you got when you drove out to the North Fork for a weekend last month and rolled down your rental-car window and breathed deeply when passing by a just-tilled field. That right there? That’s the stuff: earthy Eastern Long Island-ness.

In your mouth, the Famiglia—which is often a bi-year blend of mostly Merlot from left-bank Pomerol clones and a little (5 percent to 6 percent, Tobin says) cabernet franc—is beautifully lean and wonderfully food-friendly. And while its under-$15 price tag makes this one to grab for a simple weeknight bowl of pasta, it would be equally apropos with meals that take a little more effort—a roasted veal chop rubbed with kosher salt and fresh herbs from your neighborhood plot or, perhaps even better, maybe a little pan-seared Long Island duck breast.