The Dirty Truth About Compostable Packaging, and What You Can Do About It

Experts say that unless paper cups, corn sporks and paperboard boxes wind up in an actual compost pile, they’re no better than plastic 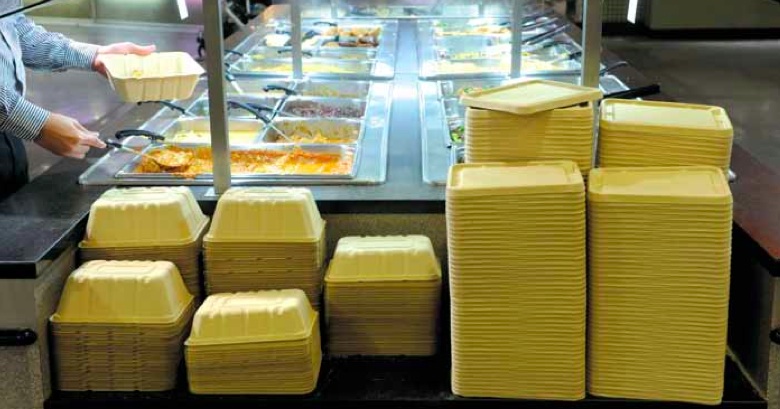 As Annie White, director of the coalition for resource recovery at the environmental nonprofit Global Green, puts it, “You lose that ecofriendly benefit when you put compostables into a landfill.”

Bumper stickers may quip “Compost Happens,” but in truth that process can’t take place in landfills, which unfortunately is where most of those lovely sepia-toned wares wind up. There, suffocated by Styrofoam, even the most lovingly designed biodegradable packaging undergoes a different decomposition that produces harmful greenhouse gases—pretty much a well-intending earthling’s worst nightmare.

That’s because the inside of a landfill is anaerobic. Packed in tight, sealed shut and deprived of oxygen, the breakdown of would-be compostables entails a whole different host of trash-loving bacteria than in the oxygen-rich environment of a healthy compost pile. And under these conditions, compostables feed bacteria that produce carbon dioxide and methane. Anyone versed in global climate change should hear the alarm bells at this point, since one molecule of methane is as damaging to the atmosphere as about 23 molecules of carbon dioxide.

“When people use compostable forks and spoons and stuff, it’s a well-meaning thing,” says John Schert, executive director and “chief garbologist” at the Bill Hinkley Center for Solid and Haz- ardous Waste Management in Gainesville, Florida. “But unless they’re actually composting these products, I don’t see the advantage—that’s bad news.”

Schert’s center is trying to get more municipalities to make landfills beneficial, using science-fiction-sounding setups that capture the bio-gas produced by decomposing organics. If properly managed, the gas can fuel vehicles or be transported through a natural-gas pipeline for home use. But until these pricy technologies are implemented widely, methane and carbon dioxide from those well-intended compostables will seep into the atmosphere and exacerbate global warming.

Fortunately, some businesses go to the trouble to send compostable packaging to its rightful place. Take Whole Foods. The chain adopted cradle-to-cradle-certified takeout containers made from bulrush, a renewable plant family that includes cattails. “There’s no dyes, and no additives,” explains Tristam Coffin, a regional green-mission specialist at Whole Foods Market. “If you were really hungry you could eat the package.”

The containers are also 100 percent compostable—and if you remember to return them to the store and toss them in the right bin, they’ll likely get it back to the land. About 90 percent of tristate Whole Foods stores send their takeout container waste to composting facilities—which is no easy feat. Collecting compostable refuse is one thing, but to complete the process, businesses must literally go to great lengths. The nearest commercial compost site is up in the Hudson Valley; the other two closest sites are in Connecticut and Delaware. And to use these private services, restaurants must pay.

“There are very, very, very few commercial composting companies in the U.S.,” says Schert, and sending refuse to a landfill is much cheaper compared to the smattering of composts facilities on offer.

Though a New York City composting bill was signed into effect last year, it so far only involves an initial study, with promise of recommendations issued by next summer. Meanwhile over half of what we send to landfills is biodegradable—things like paper, kitchen scraps and, now, mountains of compostable coffee cups and forks made from genetically modified corn. Global Green is working to develop a cheaper system for restaurants and grocers to compost, but for now, the approximately 1,100 tons of commercial and retail food waste generated in New York City each day winds up in the dump.

Unlike in San Francisco or Vienna—where city governments collect compostables alongside recycling and rubbish—in New York, if you want to keep your potato peels out of the landfill, you’ve got to do it yourself. Some citizens lug their onion peels and coffee grinds to community gardens or to pickup points at select GrowNYC Greenmarkets. But compostable containers aren’t accepted there, either, because some of their partners can’t process them.

“It becomes a complex issue,” White says. She points out that while it’s wonderful that people are innovating biodegradable options, for now plastics are ironically the better option—if they can be recycled.

But some cannot. Plastics like to-go boxes and yogurt tubs are not accepted by New York City for recycling. Though a water bottle and takeout container may both be designated as number two recyclables, these two products cannot be combined in the recycling plant since their physical and chemical properties differ, explains David Hurd, director of the Office of Recycling Outreach and Education, a program of GrowNYC.

Some New York City Council members are pushing for a bill to include all rigid plastics—including takeout containers—in the city’s recycling program, which would actually make plastic con- tainers more sustainable than their compostable compatriots. But in the meantime, New Yorkers can’t put sushi trays in the blue bins, and instead must sort pros and cons.

Council Member Jessica Lappin, a self-described outdoor lover who represents the Upper East Side, thinks rigid-plastic recycling is a worthy endeavor for the city—so much so that last year she introduced the bill to increase plastic-recyclable designation to include rigid plastics like takeout containers, and it passed legislation. This would save plastics from many lifetimes in the landfill, but more work needs to be done in terms of what those recycled plastics will ultimately be made into.

The Brooklyn-based plant that will process rigid plastic is expected to be complete in mid- 2012, though the legislation left discretionary language for the sanitation commissioner to ultimately determine the economic feasibility of extending recycling rights to all rigid plastics.

Hurd points to Sanitation Department findings that these containers represent only 0.4 percent of New York’s residential waste stream, and questions the reasonableness of costly additions to the recycling programs that would account for less than 1 percent of residential recyclables when public education about increasing return rates of existing options like foil could have much higher outcomes. But Lappin says the outcomes are worth the expense.

“This is a city where people love to eat out and order in,” Lappin says. “Lots of plastics are just used once and thrown away.” She is also encouraging restaurants to use recyclable material for food packaging.

Indeed, one of the greenest takeout containers is hidden in plain sight. Old-school aluminum may not seem as eco-chic as a compostable box the color of an Eileen Fisher sweater, but the metal is completely recyclable through citywide pickup.

Unfortunately we New Yorkers seem rather incapable of getting our aluminum clean and into the recycling bin, as evidenced by a 2005 Department of Sanitation study. While about 60 percent of newspaper and cardboard is turned in for recycling, there’s only a 13 percent capture rate for foil, pie pans and aluminum takeout containers. (Wash ’em first, people: Soiled takeout containers are discarded at the recycling plant.)

To help, Hurd and his crew regularly represent at events around the city, from Farm Aid to fund-raisers to the South Bronx Earth Fest. He and his volunteers staff each and every waste station, guiding partygoers to toss countless corn cups and half-eaten canapés into the proper bin, making for a greener event and educating people at the same time.

After 35 years in green cuisine, Mary Cleaver has learned that for all their importance, ingredients aren’t the only thing that matters. An onion’s final resting place is just as important as where or how it was grown. As the founder of Cleaver Company Catering and the Green Table, Cleaver employs a combination of techniques at her restaurant and events, using recyclables, compostable bamboo-based products, but also many reusables, including real plates and forks even at standing-room-only cocktail parties where guests typically nosh, toss and repeat. In what she describes as the oftentimes “egregiously wasteful” world of catering, Cleaver occasionally encounters venues that—despite the law—do not recycle, whether out of laziness or cost. Rather than risk this, at the end of the night her teams always take their own recycling and compost back to Chelsea Market so she can be certain they aren’t tossed into a generic bin by a lazy landlord. “I’m deeply concerned about where things go,” she says.

It shows. As an original tenant at Chelsea Market, Cleaver mounted an epic 11-year campaign to persuade building operators to provide composting options. “Garbage removal in NYC—perhaps everywhere in the U.S.—is very territorial,” Cleaver says, inadvertently evoking the Sopranos theme song. After a bidding war involving several competing carting companies, Action Carting eventually got on board and now takes the building’s compost to a facility. But the service costs more than dumping it at the landfill, since gas prices are high and driving distances are farther.

But for just about everyone else, economics are an obstacle to ecology.

Just ask the folks at Chipotle. Their salad bowls and napkins are made from 100 percent recycled newspaper—totally compostable—but at Gotham outposts, it goes in the garbage. “The plan is to get the composting program into all of our restaurants,” vows Chipotle’s communications director Chris Arnold, explaining that over 100 of the chain’s other venues already compost scraps like onion skins, avocado pits and pepper seeds.

But given New York’s current laws and infrastructure, even plain old recycling takes extra effort. About a third of all Chipotle locations have recycling programs in place, which Arnold says is more challenging to initiate than you might think. Different rules apply in different cities, and some landlords put up a fuss because they don’t want multiple waste bins on their property. “There are challenges,” Arnold says, “but there’s also ways to make things happen if you’re sufficiently motivated.”

Still, the current system is stacked against ecological choices.

“All things being equal, people want to do the right thing,” says council member Lappin, “but it’s a question of dollars and cents.” And right now it’s cheaper and easier to send it all to the dump.