An Upstate Start Up Is Both Family Farm and Processing Plant

Jim Hyland heard that other farmers his issue and he saw an opportunity. 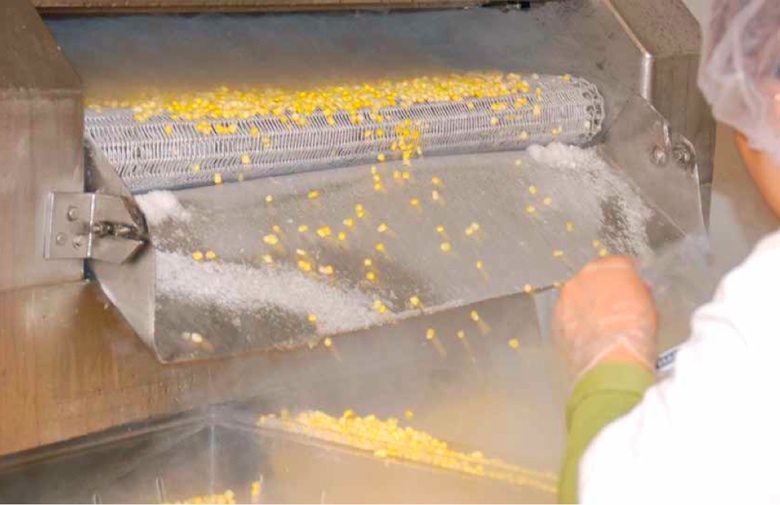 A former IBM facility on the outskirts of Kingston, New York, seems an unlikely beachhead for the local-food movement. But that’s what it became a year and a half ago when locavore entrepreneur Jim Hyland transformed the vacant IBM cafeteria into the Tech City industrial complex: 20,000 square feet of white tile and stainless steel, housing a dedicated processing line, an incubator kitchen and freezer space managed by a team of 16 employees, all of which combined serve as something of a time machine, suspending Hudson Valley harvests for sale beyond the short harvest season, a boon to farmers and eaters alike.

The idea was born a few years back when Hyland’s summer CSA share delivered more kale than he could eat in a week. Rather than waste it, he froze it; months later, when he told the farmer how much he was enjoying it in winter soups, he learned that the farmer had plowed under much of his kale crop because he hadn’t been able to sell it all at harvest time. Hyland then heard that other farmers faced the same issue—surplus harvest during the high season, followed by months with little more than stored roots to sell—and he saw an opportunity.

The problem was that the necessary infrastructure, namely processing kitchens outfitted with industrial equipment, was seriously lacking in the Hudson Valley. He began freezing surplus produce at an old rent-by-the-hour processing kitchen in Poughkeepsie. (Pickle patriarch Rick Field also used that kitchen in the early days and says the space was like an old car—it was hard to get it to pass inspection.) But nothing better existed within driving distance of the Hudson Valley.

Hyland had stumbled onto the produce equivalent of “the slaughterhouse problem.” Much has been written about the lack of independent area slaughterhouses and the difficulty small livestock farmers face in finding reliable, humane facilities to turn their pigs and cows into pork and beef. Sure, unlike livestock farmers, people who grow peaches or tomatoes can take their crops straight to market, no processing needed—but if they haven’t sold in a day or so, they’re bound for the compost heap. Hyland learned that big agribusiness’s vertical monopolies allow them to build their own in-house abattoirs—and produce-processing plants—while independent family farmers lack access to equivalent equipment.

So Hyland figured, “Why not build it?”

“I assumed there were more people like me who wanted that healthy food—from farms they knew—during the winter,” he recalls matter-of-factly.

So he and business partner Luc Roels spent about $2 million transforming the kitchen of the old IBM office into a state- of-the-art produce-processing facility called Farm-to-Table Co-packers, which they opened in June 2010 with a goal that is both simple and revolutionary: to offer local farmers easy access to top-quality processing equipment and get more people eating local produce all winter long. Michael Hurwitz, director of New York City’s Greenmarket program, calls Farm-to-Table Co-packers “the most significant agricultural development in our region in the past 15 years.”

Clarence Birdseye’s 1925 patent on a commercial method for rapid-freezing produce marked the launch of his enduring Birds Eye brand—as well as the national frozen-food industry—but Hyland aims to use that same technology to support the very human-scale systems it originally upended. And the products are proof that modern technology needn’t mean mass-produced and flavorless. Roels, who has personally simmered, brined, blanched and pickled for over a decade, says that at its core, Farm-to-Table Co-packers is about simple, homegrown food. “Get rid of the chemical industry in the food industry,” Roels says. “Let’s go back to the basics and automate where it doesn’t influence your homemade quality.”

Rick Field of Rick’s Picks, who has been producing at Farm-to-Table Co-packers since they fired up their stoves, says he doesn’t know what he’d do without their unique combination of top-tier technology and locavore sensibilities. Take his addictively hot-sweet Handy Corn. Field developed the recipe using peak-season corn and a hard-to-find heirloom pepper called ají dulce grown by Tim Stark in Pennsylvania. If Field were making it in the old Poughkeepsie kitchen, he’d need up to 10 people with knives just to cut corn kernels off of cobs—but Farm-to-Table Co-packers’ corn-cutting machine slices perfect kernels before you can say “shucks.”

On the other hand, Hyland’s team is completely committed to handwork when it’s needed—say for the special peppers, whose seeds and stems must be painstakingly removed. “A larger generic facility,” explains Field, “would say, ‘Forget about this, we’ll add some pre-processed red pepper for color and some form of liquid heat.’ But it wouldn’t be the same. Tim’s peppers have this wonderful fragrant quality and this little tingle of heat on the end. It’s what makes Handy Corn unique. Farm-to-Table offers quality equipment but at the same time there’s a willingness to roll up their sleeves and do the handwork.”

A sophisticated Individually Quick Frozen system, acquired last year through a grant, offers area family farms cutting-edge freezing technology once only available to industrial food processors. Inside the storage freezer, surrounded by wooden pallets stacked with boxes of frozen sweet corn and frosty, plump blueberries, Hyland’s breath pops like tiny cumulus clouds in the frigid air. The produce is picture-perfect and his excitement is palpable.

“Our mission is to support the farms,” says Hyland. He’s succeeding. And not only by cutting, pickling or freezing produce.

Nationwide, family-farm advocates are calling for the construction of small processing kitchens for rent by the hour in agricultural communities. But even when they are available, the burden for all processing, distribution and marketing lies with the farmer—on top of the farming itself. Farm-to-Table Co-packers, on the other hand, is more than a processing plant for hire. Hyland and Roels are in the market development business. The USDA-certified facility offers industrial equipment and production capacity at a scale not previously available, or even considered, in the region. And the flexible model offers farmers choices: They can develop a branded jarred or frozen product that they can sell on their own. Or they can sell produce to the facility and just walk away.

That’s because Hyland didn’t just build that gleaming facility. He also founded Winter Sun Farms, a novel CSA model that purchases local produce at peak harvest, freezes it and then delivers monthly packages of flash-frozen produce to members all winter long. Last winter the CSA sold out upstate and down, and shareholders in the Hudson Valley, Brooklyn and Manhattan feasted on the likes of flash-frozen broccoli, beans, bell peppers, even blackberries when such items had long since disappeared from farmers markets. (This magazine’s editor was one of the ecstatic members.)

This year Winter Sun has expanded to a whopping 28 CSA pickup points in the valley and here in the city, from the East Village and Chelsea to Lenox Hill and Riverdale.

It’s little surprise response has been so strong. Farmers market fever has swept the nation, and die-hard devotees want local food 12 months a year—without having to subsist on rutabaga or spend the whole month of September jamming and canning. Winter Sun offers convenience and quality—not to mention freedom from the fear of being seen leaving C-Town with a pint of blueberries from Chile in January. Attorney Harley Abrevaya, a member of the Lenox Hill CSA, uses the frozen vegetables for soups, pasta dishes and stir-fries and whirs the frozen fruit in smoothies. “Frozen ‘fresh’ local produce is a great addition to the CSA philosophy and an easy and affordable way to feed my family as close to the earth as possible,” says Abrevaya. Dore Nash, who led a traditional CSA in Chelsea for a time, says that initially the idea of frozen vegetables was a tough sell. But when members heard Hyland was working with Stoneledge—who provided their produce spring through fall—the case for Winter Sun Farms was made. Members now enjoy Stoneledge raspberries and other produce at the coldest times of the year. Nash, who says her work schedule is “crazy,” loves the combination of convenience and creed.

“Pre-prepped veggies are a lifesaver for any harried urbanite,” she admits, adding that the icy edibles are downright delicious. “Love, love, love the berries. Sometimes I even eat them frozen with a little skim milk—I’ve also been known to eat the frozen sweet-corn kernels.”

The rollicking response is such that Hyland is replicating the model: He is now operating
two sister sites in Asheville, North Carolina, and Rochester, New York; new locations in Binghamton and Greater Philadelphia will launch this winter and he’s in conversation with potential investors about other sites.

But while Hyland is thrilled with the public response to the Winter Sun CSA, he says it’s food service that is best positioned to bring about major change. “If schools and institutions get on board it would create a huge shift in demand for local produce. This type of demand can build the infrastructure and plant the fields that will lead us to a vibrant and economically sustainable local food system.”

Watching the wiry, energetic Hyland walk a visitor through the facility, one begins to understand the level of stamina, creativity and unflagging enthusiasm needed to bring such a venture to fruition. He is a consummate campaigner, and the farmer is unquestionably his constituent. In place of locavore rhetoric, he favors a sort of down-to-earth pragmatism. “We’re not going to be able to do this kind of thing on a soapbox,” he says. “It’s just not going to happen.”

“Our season is only 10 weeks long for selling fresh,” says Bruce Davenport of Davenport Farms in Stone Ridge, whose September sweet corn is justifiably famous. Just imagine, he says, “if we can extend that season to 52 weeks.” Martin Stosiek of Markristo Farm in Hillsdale feels fortunate to have such an enthusiastic buyer for his certified organic beans and squash. “There’s a certain efficiency we can get with Jim,” he says.

But if Farm-to-Table Co-packers has been a boon to farmers looking to sell surplus, it was an absolute godsend to others hit by Hurricane Irene’s devastating floods. Days after the storm, Greenmarket director Hurwitz visited Stanley Osczepinski’s farm in the black dirt region of Orange County, where row after row of heirloom tomato plants were heavy with an almost-beautiful crop—all split from the relentless rain.

Two years ago, says Hurwitz, it all would have been compost. But instead Hyland’s crew worked fast and simmered the unsellable crop into Black Dirt brand heirloom tomato sauce. Hurwitz says that provided income to a farmer who desperately needed it. But this winter, city eaters will feel like the lucky ones.