Eating Underground: Secret Suppers on the Lower East Side

Monthly dinners at Les Salonnieres are shrouded in mystique. 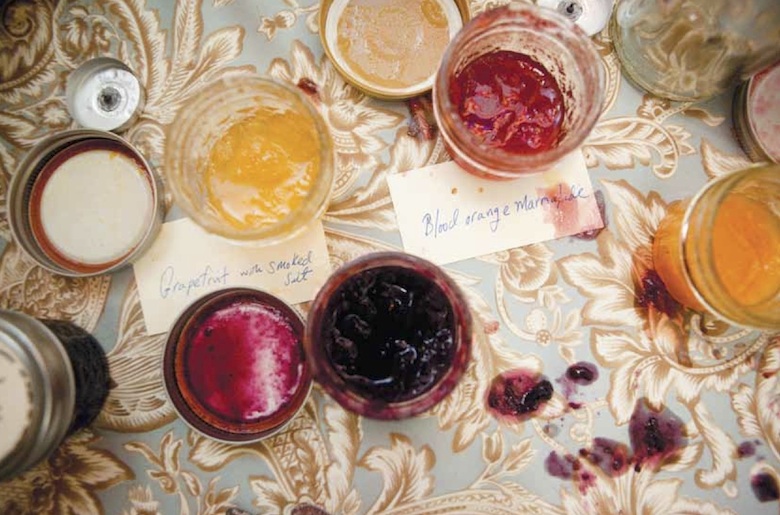 Supper club salons-where poets, painters and picklers convene over home brew-abounded back when Carter was in office, but the form died out well before Warhol.

Or not. Way down on the Lower East Side, in a semi-abandoned tenement building on a sleepy side street, the outlaw attitude of a ’70s squat lives on. There Adam Aleksander and Jenny Miller host a monthly dinner series called Les Salonnieres in the empty apartment below Aleksander’s: perform-and-eat evenings that can only be described as happenings, though the modern-day artists prefer cutting-edge cocktails to their predecessors’ cheap wine.

Miller, a 29-year-old food writer, and the 26-year-old Aleksander, who’s worked as a set designer and props maker and runs over-the-top parties like a freaky Marie Antoinette-themed night complete with powdered wigs and bustles, keep the vibe alive. The pair met when Aleksander-a rail-thin, effusive artist with a penchant for tight, brightly colored pants-was a food runner at Employees Only. When the staff said Aleksander’s short shorts weren’t appropriate, Miller was eating there and disagreed. A friendship was formed and eventually the two conspired to collaborate on laissezfaire feasts complete with artists curated for each, selected from a call for contributors. Les Salonnieres was born.

Miller and Aleksander (who, like Warhol, hails from Pittsburgh) make most of the food in Aleksander’s apartment upstairs.  Attendees contribute around $35 apiece for the themed multicourse dinner and drinks, but entrance to the subsequent merrymaking is free for those on the mailing list, their friends and anyone who happens finds their way in. After dinner, a bang of a cymbal-often provided by drummer Brian Quinn, who runs the “traveling wine saloon” called Noble Rot and sometimes serves as Les Salonnieres’s mixologist-starts the show.

“This is dedicated to bringing people together, to letting artists share their work,” Aleksander tells the crowd at one recent Salonnieres, this one a potluck Jewish brunch featuring Russ and Daughters’s lox, a pile of bagels, a massive sweet kugel and Aleksander’s fast-becoming-famous green dip. (“You’re going to love this,” he enthuses, tossing fistfuls of parsley and dill, a can of pineapple, hunks of ginger root and a dozen cloves of garlic into a blender. “It started out as a chicken marinade. Each time it’s totally different.” It’s also surprisingly delicious.)

The artists-and Aleksander’s fluffy little dog Piglet, rescued from a crackhead-mingle as you eat, and might include Big Mike, a poet with a deep voice who yells of big-bottomed Irish lasses as an actress portraying the same wiggles before him; or Ventiko, a performance artist in a blond wig who shoots old-fashioned Polaroids for $5 in a corner of a room. Comic artists might display their pages in progress, recording artists who lay tracks for Jay-Z speak about sound, burlesque dancers bump and grind, and, yes, edible artists abound, too: Laena McCarthy of Anarchy in a Jar shows off her sticky-sweet jams while Eddie Huang from Baohaus on Rivington Street shares his spicy, meat-stuffed steamed buns.

Art and eats aside, much of the allure is the setting itself: two abandoned second-floor apartments below Aleksander’s in a teetering turn-of-the-19th-century building squeezed between the projects, a parking lot and the Williamsburg Bridge on-ramp. Tin ceilings sag, a hundred layers of blue-gray paint peel, slats peek through the crumbling walls, a long row of rickety, candlelit tables are set for the meal. A few dim bulbs illuminate a pair of sparkly red high heels found on the street, a mannequin in the dusty old bathtub and a television tuned to old movies.

Aleksander says the landlords, two old Jewish brothers who bought up property in the ’60s and ’70s, “let the place fall into a shambles.” (“They’re Googleable as the worst landlords in the world,” he adds.) As he tells it, one of the brothers lived there in squalor, even keeping two chickens in a back room. When he died, says Aleksander, “I went dressed in my best clothes, with pink hair and Shomer Shabbos bagels, and asked the landlord if he could rent one of the apartments to me. ‘Did you know my mother lived in Tel Aviv? It would be a mitzvah if you could help me out.'”

The plea worked, and with little more than elbow grease and found materials Aleksander transformed the tenement into a home-not just for himself, but for Manhattan’s hottest happenings.  Warhol would be proud.

The monthly Les Salonnieres salons are only open to invited guests, but if you can find them online, you’ ll probably be included.