Dining in the Rough: A Tour Through the Diamond District

Bialys and borscht as good as gold. 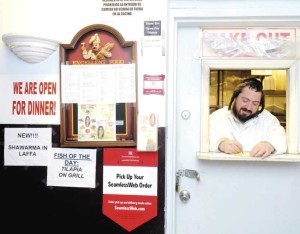 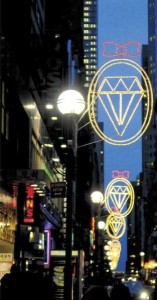 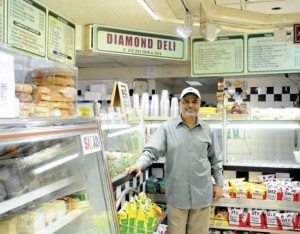 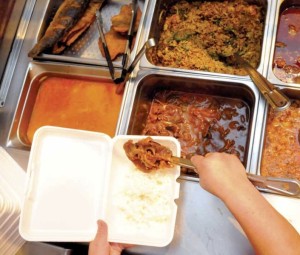 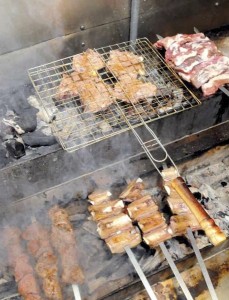 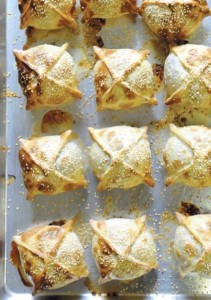 As commercial districts go, West 47th Street’s Diamond District is small-just one crosstown block pinned between Fifth Avenue and Avenue of the Americas like a big gaudy brooch bedazzling a fraying collar. Less than one-tenth of a mile, this boisterous stretch of low-slung, mostly prewar buildings is a portal to a fastfading world. On any weekday, you can run its raucous gauntlet of street criers, fast-talking hawkers, gold-buying spielers and assorted schmoozers and feel an insistent tug, pulling you back in time to mid-20th-century New York, when cash was king, haggling an art and the Internet a meshugga fantasy.

In the 1940s, lured by cheaper rents and newer spaces, shop owners and traders from the Bowery and Canal Street, then Manhattan’s jewelry district, migrated north to West 47th. At the same time, according to Martin Hochbaum, executive director of New York’s Diamond Dealers Club, Orthodox Jews fleeing the diamond centers in Antwerp and Amsterdam arrived in New York, bringing their entrepreneurialism and expertise-as well as their appetite for cholent. Their ambition would drive the growth of New York’s diamond and jewelry industry through the coming decades and, along the way, its menu selections.

Dairy restaurants, old-world delis, sandwich carts and a host of improvised eateries soon sprouted along the block. The latter were found in the oddest of places: back offices, lobbies or on upper floors where the likes of stone setters, bench jewelers, casters, platers and polishers labored behind the scenes, oblivious to the shoppers drawn to the glittering showcases in the jewelry exchanges below. (For more exotic fare, jewelers turned to the second-floor Hong Kong Inn, where ladies of the night would dine at midday.)

“My father started on the street in 1960, so as a little boy I grew up here,” says Michael Toback, the second-generation owner of Myron Toback’s, a jewelry supply store on 25 West 47th. Back then, Toback says, the street’s food scene was vibrant and varied. Quintessential Jewish delicatessens like Kaplan’s and Berger’s (the latter moved to 39th Street in 2005) ruled the street with pastrami and lox while competitors lured customers with home-style food prepared at a furious pace. Toback recalls his all-time favorite, now long-closed: the M&M Sandwich Shop in the lobby of 15 West 47th Street “It was just a sliver of a place, eight feet wide and 40 feet long, with nine guys at the counter making amazing sandwiches nonstop.”

Back in the street’s salad days, many were sustained by morsels from “Paul the Sandwich Man,” who wheeled his cart from exchange to exchange, enticing booth owners and workers with egg salad or chopped liver. Today Paul is gone, but his itinerant sandwich-selling kind lives on. Position yourself midpoint on the street between 11:30 a.m. and 1 p.m. on weekdays and you’ll see a collection of Armenians, South Americans and East Indians briskly wheeling their food carts into the exchanges, hawking their midday meals. Where they come from and where they go off to is anyone’s guess.

What’s certain is that some of these relative newcomers, representing a successive wave of immigrants from such far-flung places as Uzbekistan and the Republic of Georgia, are carrying on the street’s Jewish food traditions. Sure, some eaters are tempted away by the cubic zirconia-like glitter of Dean & DeLuca’s in Rockefeller Center and Pret a Manger around the corner on Sixth, but a handful of under-the-radar places continue to cater as quietly as speakeasies. In keeping with the block’s tradition, all are tucked away on the upper floors of dowdy, sometimes shabby commercial buildings with barely a sign in sight.

Walk three flights up 74 West 47th, past the hole-in-wall shop buying gold, past the aging jeweler hunched over his bench with an acetylene torch in hand, and you’ll come to Gan-Eden, a glatt kosher Bukharian restaurant open since January. (Gan-Eden is Hebrew for “heaven.”) Don’t assume the waitresses are fluent in English and be sure to grab the house menu-the take-out version is a hard-to-digest alphabet soup of Russian and English, with perhaps some dialect of Tajik thrown in. The dining room has a stripped-down elemental feel. Nondescript tables and chairs face a display case packed with meat. The atmosphere: informal and temporary. If you were waiting for Godot, this would be the place to do it. On the plus side you could enjoy freshly made baba ganoush, an elegant cabbage salad or a comforting beef noodle soup called “lagman,” subtly flavored with dill, coriander and anise. The noodles are hand-pulled. Gan-Eden’s young owner Jacob Isakoff, a twentysomething Adrian Brody look-alike, hopes to attract customers outside of his typical draw of Bukharian jewelers who now dominate the business district.

But cuisine that carries a kosher designation, whether it’s from Eastern Europe or the valleys of Uzbekistan, isn’t everyone’s dietary necessity. One flight up, on the fourth floor, is El Rincon del Sabor. Operated for 17 years by the Quizhpes, a family of Ecuadorian diamond setters, El Rincon specializes in authentic homestyle Ecuadorian food. Dishes change daily. The English-speaking skills of the staff are in short supply, so be sure to read the kitchen’s blackboard carefully. The Quaker, a refreshing drink made of oats and fruit, makes the long ascent up a creepy stairwell worth it.

Across the street at 55 West 47th Street is an eatery for everyman.  Diamond Deli is nestled in a warren of small jewelry workshops and booths on the mezzanine level of the world’s largest jewelry exchange-or so the outside signage claims. Owner Asraf Patan, from the Indian state of Bihar, offers separate kosher and halal menus, as well as daily specials for his South American customers, complete with rice, beans and plantains. In a lilting voice he describes his business strategy: “I need to have a little bit of everything because I don’t want them to leave once they find the place.” The little bit includes buttermilk pancakes, fresh mango juice, hamburgers, Reubens, teriyaki chicken and turkey bacon BLTs. The biggest attraction, though, is the mezzanine-level view of the exchange below. Sight lines are good enough to catch the sparkle off a 2-carat diamond ring.

Among these “hidden restaurants” is one that’s striving to throw off the cloak of anonymity. Taam Tov has been on the block for at least 15 years. Like Gan-Eden, it serves kosher, home-style Bukharian cuisine that draws from Chinese, Russian, Persian and Middle Eastern influences to create a savory and deeply spiced palate. (A few years back it moved to 41 West 47th, the site of the old Gotham Book Mart, and now occupies the third floor of what was once a Chinese restaurant. Many of the Chinoiserie-style decorations still adorn the wall.) But unlike its peers, Taam Tov is mainstreaming it and hopes to attract diamond district tourists with a wine list, cocktails, evening hours and alfresco dining on the outside terrace, directly overlooking the street. Will the tour buses be far behind? To paraphrase Woody Allen: There’s no question that there is a hidden world. The problem is how far it is from Midtown and how late is it open.

Today West 47th Street remains a top diamond distribution center, but large-scale diamond and jewelry manufacturing has moved on-first to industrial workshops in the West 30s, then to Long Island City and then points beyond. The drivers: high rents and cheaper foreign competition. (At one time there were at least 3,000 diamond cutters on the street; now the number is closer to 200, say industry experts like Martin Rapaport, publisher of Rapaport Diamond Report.)

The result? On the retail side: more competition among the exchanges-there are 25 in all. On the manufacturing: bigger players have given way to a cottage industry of sorts, with smaller shops of seven to 15 men pumping out jewelry lines of their own or for niche designers.

And December saw the shuttering of the district’s last dairy restaurant.  Diamond Dairy, a venerable luncheonette hidden up on the mezzanine level of the National Jewelers Exchange at 4 West 47th Street, was the place to enjoy lunch and a bird’s eye view of the jewelry bazaar below, where old-world-style merchants compete for customers with pitches as ardent as marriage proposals. For 65 years, it satisfied both dietary requirements and nostalgic cravings for the Jewish soul food-including kosher Chinese selections-that fed the district for decades. Its blintzes were tam-ganeydn, a taste of heaven; its tuna salad is said to have rivaled that of Eisenberg’s, the vintage sandwich shop still thriving in the Flatiron District.

But Diamond Dairy provided spiritual sustenance, too. For many on the street it was the go-to place to find a minyan-the number of adult males required for communal worship. Religious Jews would often convene for afternoon prayer service, known as the mincha, in a side room where takeout orders were routinely prepared. The comforting sound of davening: a reminder to lunch-counter diners that one doesn’t live by bread alone. Due to a landlord-tenant dispute, owner Samuel Strauss locked his door in December for the last time and packed up more than a half-century of memories. A diamond may be forever, but the diamond district may not be so lucky.