This not-for-profit believes we can drink our way to prison reform. 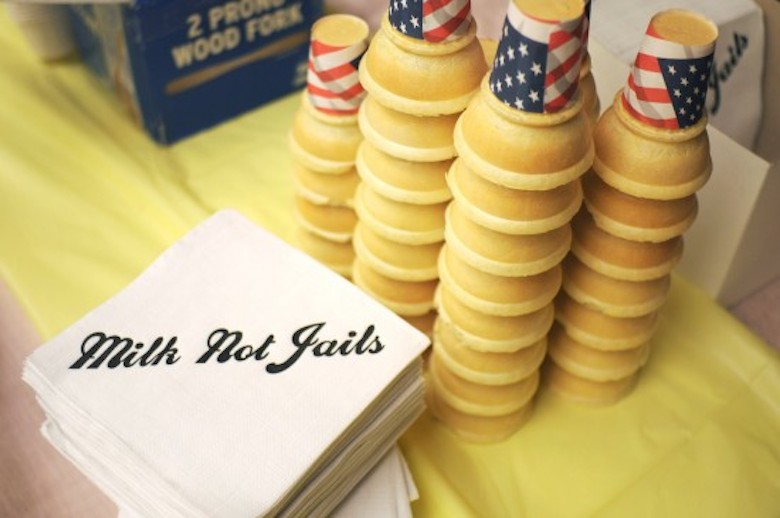 That’s the premise behind Milk Not Jails, a two-year-old political-campaign-cum-start-up business that’s trying to address a less-than-intuitive intersection of two problems: the injustices in our jail system and the struggles of upstate dairy farmers.

What on earth do milk and jails have to do with each other? “That’s the first question everybody asks,” says Lauren Melodia, the group’s founder, who may be the only person in New York City with the background to see the connection. She knows the local food world (she’s worked at several Union Square Greenmarket stands and manages a CSA in Bed-Stuy). But she also knows the prison movement, having organized a long—but ultimately successful —campaign to slash the outrageous prices prisoners were being charged for phone calls. After that campaign, the 30-year-old spent a year in an upstate prison town, investigating obstacles to reform. And here’s one of the biggest: the farming industry, which used to be the basis of the upstate New York economy, has been decimated by the dominance of mega-processors that set their own (low) prices for what farmers produce. (The biggest of them, Dean Foods, controls 70 percent of the Northeast’s milk market.)

And what has stepped in to replace those dairies? Prisons. The New York State Department of Correctional Services spends $2.5 billion a year and employs over 30,000 people. About 75 percent of the state’s prisons (often operated by for-profit contractors) are located in rural areas, where voters and politicians fight reforms out of fear they could cause prisons to reduce staff or relocate. “Agriculture and the criminal injustice system interface in the same landscape,” Melodia says. “But incarceration shouldn’t be a jobs program.”

So Melodia decided to create not just a movement, but a business that could revive the upstate dairy business. How? By selling upstate milk (and eventually other farm products) here in the city, under its own Milk Not Jails brand. Her ultimate goal is to build Milk Not Jails into a milk processing and distribution cooperative big enough to give Dean Foods a run for its money.

Right now, though, even the word “tiny” overstates the company’s size: Last summer, in a first-year pilot project, it sold milk from one farm to seven CSAs. Melodia’s now busy recruiting more farmers and more CSAs to participate this summer. She’s also targeting cafés, day-care centers and other outfits that need a lot of milk but aren’t big enough to get low wholesale prices.

At a recent organizing meeting (held in a plain conference room downtown), it looked to an outsider as though Milk Not Jails’ dual mission demands an improbably broad set of skills: fundraising (it got seed money from Kickstarter, and is borrowing office space from the Center for Constitutional Rights); business smarts (Melodia’s currently hunting for good food-buying software); political activism (members made plans to go to Columbus Circle to leaflet people lined up for the weekly buses to visit upstate prisons); and just plain goofiness (ice-cream socials to draw people in and explain—yet again—just how milk and jails are connected).

Melodia is quick to acknowledge the all but insurmountable obstacles Milk Not Jails faces. For starters, she says, “farmers are the hardest group in the world to organize. They don’t go anywhere.” And the business plan depends on persuading people to pay a little more for their milk—so that the incarceration industry can’t have its way with upstate communities.

But the group’s gotten some surprising support. Last June, for instance, at the state’s biggest dairy festival, it bemused locals with a parade entry consisting of a pink-haired lady on stilts, the group’s ubiquitous ice-cream-cone mascot and a small band playing “We Shall Overcome.” To their astonishment, the motley crew won the award for Best Overall Entry, as well as a lot of attention in the local news.

“And when we went to pick up our award,” Melodia says happily, “people said they understood what we were about.”