How a vegetarian Upper East Sider became a cattle rancher—in the name of animal welfare and true love. 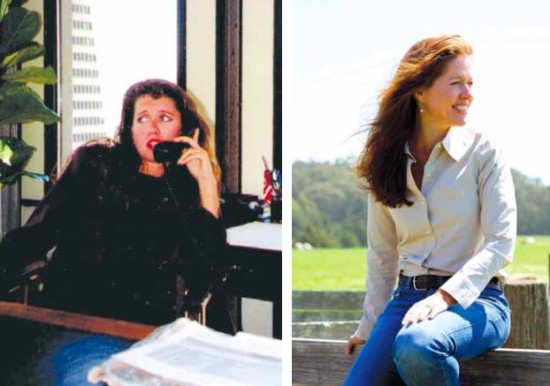 A decade ago I was probably the last person on earth you’d have thought might become a cattle rancher. And not just because I was a vegetarian who lived on the Upper East Side. But because I was the senior attorney heading up Waterkeeper’s national fight against factory farms and their egregious affronts to animal welfare, human health and the environment.

My role in the project had begun in the summer of 2000. I was already working for Robert F. Kennedy Jr. when he called my cell phone one Saturday with a surprise assignment. “Nicolette, I want you to take charge of our hog campaign,” he barked, somewhere between command and request.

His vision was that we would mount a major national crusade against polluting industrial animal operations—although at this early stage the hog campaign was still little more than his notion of suing the giant pork corporations that were contaminating rivers with massive quantities of raw manure.

I knew nearly nothing about the issue and a total immersion in poop was not exactly my dream job. “Uh—I’m not sure I want to work full-time on manure,” I ventured.

“Just go to Missouri and meet some of the people asking for our help,” Bobby responded. “Then you can decide.”

Within days I found myself at the Kansas City airport. Two farmers, a lawyer and a Sierra Club employee drove me two hours northeast to witness firsthand how industrial animal production affects people, animals and the environment.

Next to me in the van was Terry Spence, a second-generation cattle farmer who’d been tangling with one of the country’s largest pork producers for over a decade. Ten years prior, when he and his neighbors first learned the company was coming to town, they engaged in every legal form of protest they knew—letter writing, petitions, rallies, even a concert with Willie Nelson. All to no avail. Bulldozers were soon moving dirt for a planned complex of metal buildings that now housed 70,000 hogs.

My rural reverie was interrupted abruptly as we pulled up to the large enclave of long metal warehouses. It was impossible to picture living creatures in the windowless structures. Yet more than a thousand pigs were crowded into each building, where they’d spend every day of their lives in metal and concrete pens. Huge open-air waste ponds the size of football fields held untreated urine and manure from the tens of thousands of pigs.  The elaborate mechanized waste system, I came to understand, is the cornerstone of cheap mass-scale livestock production. A fullgrown hog generates as much feces and urine each day as four people, so a 70,000-head operation produces the fecal sewage of a city of 280,000 people—but no laws require that it be treated.  This enormous volume of manure is the main reason industrial animal facilities are culprits for so much nauseating odor, air pollution and water contamination.

As my tour continued, I saw streams contaminated with nitrogen, drug residues and manure runoff. I met people who could no longer sit in their own yards because of the intolerable stench and swarms of flies. They’d contacted their elected representatives, time and again, yet agribusiness’s enormous political clout ensured that nothing had been done. These salt-of-the-earth rural Americans had concluded the courts were their last hope.

Next I traveled to North Carolina, where my guide was Rick Dove, a retired Marine Corps colonel and lifelong Republican. He had signed up to work for Bobby Kennedy as he witnessed industrial hog, chicken and turkey facilities ravage his state’s natural environment.  From trucks, boats and airplanes, Rick showed me a landscape littered with confinement buildings and liquid manure ponds, and rivers choked with algae where massive fish kills had become commonplace.  I saw fish—and fishermen—with gaping sores.

It hit me that there was nothing I’d rather do than pick a national fight with animal agribusiness, which seemed to be rampaging out of control. On the drive from La Guardia to my Upper East Side apartment, I called Bobby with my answer: “I’ll have those pleadings for you in a week.”

The case against industrial animal production was soon consuming my life. Evenings and weekends found me hunched over mounting piles of environmental and public health research, intently constructing our public and legal cases. While I hammered out federal Clean Water Act lawsuits, Bobby’s larger vision of an assault on the industry took shape. He recruited high-profile plaintiff’s lawyers for a legal team that would sue agribusiness companies for tort injuries. Each day we spent hours responding to e-mails, letters and phone calls flooding in from people fighting factory farms in every corner of the country.

When the horrors of industrial animal production come to light, the meat, dairy and egg industries’ standard response is that this is the only viable way to feed the world. To dispel this fallacy, we needed examples of responsible animal farms that provide safe, reliable food without destroying wildlife populations and ecosystems. So I built bridges with people raising animals the right way. I kept hearing about a national organization called Niman Ranch, which was both a farmer cooperative and a way that naturally raised meat had its own branded—and verified— identity. Each farmer and rancher in the Niman network followed animal-husbandry and land-stewardship standards that ensured humane livestock treatment and environmental protection while producing high-quality meat. These farmers raised their animals not in barren pens or crates but on grass or straw; never fed their animals antibiotics (standard practice at factory farms); and because the animals were raised by the hundreds, rather than by the tens of thousands, waste became valuable fertilizer—not manure lagoons. The Niman farmers—many of whom have personally experienced the havoc that industrial agriculture brings to heartland communities—quickly became essential partners in our campaign.

A year after reaching out to the Niman network, I finally met founder Bill Niman at a formal event on Capitol Hill. Despite his reputation as a pioneer of humane, sustainable meat production I was most struck by his moustache and blue jeans, both of which seemed quite out of place inside the Beltway.

True, he didn’t sweep me off my feet that afternoon. The laidback California rancher was definitely not a potential love interest for a fast-talking vegetarian Manhattanite who rarely stepped out of high heels. But a year later, Bill called with an irresistible invitation to join him and New York Times’ food writer Mark Bittman for dinner at Savoy. It was a pleasure to talk food politics with a revered rancher and a genius journalist, but the conversation almost came to a halt when I ordered the pasta primavera.  “Oh—are you a vegetarian?” Bill queried.

“Well, yes, as a matter of fact I am.” I was trying not to sound defensive.

“Oh, that’s cool,” he answered without missing a beat. Hmm.

This was clearly no ordinary cattle rancher.

After Bittman departed, Bill confessed that he’d felt struck by a thunderbolt the first day we met. The feeling was not mutual, I let him know with my usual candor. No problem, he said, let’s just be friends.

After that night, whenever Bill was in New York we’d meet at a coffee shop or take walks through Central Park, all the while debating the best ways to fix a food system we both agreed was horribly broken. But one warm day as we sat alongside the reservoir it hit me: This man I’d come to like very much and respect tremendously was also someone I could love. Someone I did love.  A year later we gathered our family and friends and made it legal.

Following the footsteps of Eva Gabor in Green Acres, I packed up my high heels and moved to Bill’s Northern California ranch, which was about 200 acres larger than Central Park and home to 84 mother beef cows and their calves. Once settled in, I’d look for a suitable position as an environmental lawyer—or so I thought.  Somehow, I just never got around to it.

After years chronicling industrial animal abuses, I reveled in the rightness of this kind of agriculture. Instead of being fed antibiotics and slaughterhouse wastes, these herbivores ate grass—the food their bodies were designed for; instead of a feedlot pen or metal crate, they roamed across the open range and took afternoon naps in the sun; instead of artificial insemination, they courted and mated naturally, gave birth and raised their young according to their instincts. They lived in a way that I was not only comfortable with, I was proud of. I loved being around animals that were enjoying their excellent lives.

I began tagging along on daily chores, asking lots of questions.  Bill entrusted me with little tasks like fetching a tool, checking a water trough or tracking down a wayward calf. I learned the importance of understanding cattle behavior, vital when working with animals averaging 1,400 pounds. “We always try to work with their natures, not against them,” Bill explained. I learned never to walk directly toward a cow, which can make her feel threatened.  Instead, if you approach at an angle of 45 degrees or so, you can usually get quite close without triggering her flight response.

As my knowledge deepened, my responsibilities grew. I learned the best ways of doing everything from moving cattle on horseback to fixing fences. It surprised me to find that I didn’t miss my hectic New York life. A year or so into my unintended apprenticeship I had become the primary labor on our ranch. By day I worked outside in boots and jeans, by evening I curled up by the fireplace with agricultural and environmental literature, especially old farm books, from before agriculture’s industrialization.

This combination of ranch work and reading reinforced what I always believed: that agriculture can respect nature’s ways.  I now understand that the best animal farming can actually be environmentally beneficial—protecting grassland habitat, recycling nutrients and raising food on non-tillable land.

After my dreary tours of agribusiness facilities, I have had the privilege of visiting wonderful farms and ranches in every region of the country. They are places where nature is the inspiration, not the adversary. People know and respect both their animals and their neighbors. These farmers and ranchers are deeply knowledgeable about their local climate, soils and wildlife. Automation, mechanization and machinery are minimal. Animal feed is grown on the farm—not imported from Brazil. And livestock live under the blue sky, where they breathe fresh air, interact naturally with one another and forage much of their own food. These pioneers of the new food system fill me with optimism about the future of American food.

I still visit New York once or twice a year and love every minute.  But I’m convinced I’m meant to be on the farm now. Bill left the company he founded and we spend many hours working alongside one another on our ranch. We speak and write about the problems of industrial food production, contrasting them with the benefits of ecological farming. Our own ranch is our daily inspiration. We are busier than ever these days because we have a happy, curious, energetic two-year-old. He’s given both of us an even greater sense of urgency—and hope—about creating a food system that produces healthy, delicious food and can be sustained over the generations.

I’m proud of my legal efforts to stop industrial agriculture, but writing briefs about manure lagoons isn’t nearly as much fun as herding animals to fresh pasture. Now that I’m working to change the system from within, I find the grass is indeed greener on the other side.