Fast All Day, Feast All Night 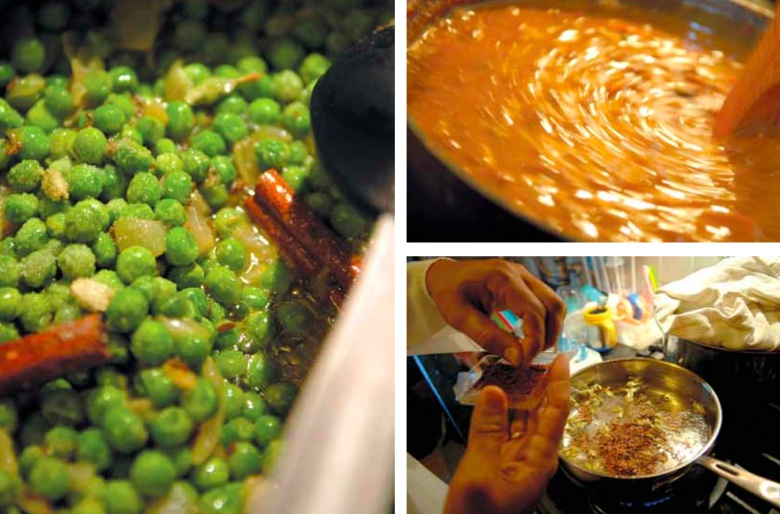 Aziz Osmani, the manager of Kalustyan’s, Murray Hill’s international provisions emporium, is used to placing big orders from local and global suppliers—for, say, their 50 varieties of rice, or two dozen variations on the humble lentil. Deliveries often arrive on pallets stacked with 25-kilo burlap sacks. But it’s during Ramadan, the annual month of Islamic fasting, that he needs to make his biggest food orders.

“We order about 5,000 pounds of dates for Ramadan,” says Osmani. “We also need to be fully stocked with ghee and certainly kalijira rice,” he says, mentioning the rare perfumed miniature grain from Bangladesh. “Kalijira is for the precious occasion—weddings, breaking the fast or [the feast] Eid at the end of Ramadan.” Last year, low harvests meant Osmani ran out of the low-yield, high-value rice, but he’s procured a sufficient supply for this year’s celebrations.

Ramadan, the ninth month of the Islamic calendar, is in fact a time to experience hunger: Muslims around the world fast from sunrise to sunset to remember the suffering of those in want, at the most visceral level. But each night families and communities gather for evening prayers and sumptuous spreads. Unique dishes, drinks and desserts slake thirst, give succor and bring people together.

Ramadan marks the revelation of the first verses of the Koran to Mohammed and falls approximately two weeks earlier each year. This year it begins around August 1. At the end of the month, daylong fasting gives way to midday feasting in the annual Eid al-Fitr holiday—think Christmas, but with biryani in place of Brussels sprouts, kebabs swapped in for carrots and Turkish delight instead of turkey.

The varied cuisines of the Muslim world have elaborated different ways to break the fast each Ramadan evening. Relieving thirst is often paramount, and South Asian Muslims in New York have carried the popular sharbat drink to the five boroughs; its myriad forms can include lemon juice, hibiscus, lime leaf, black salt, and sweet basil seed, which swells into succulent little orbs.

Back in Bangladesh, when Aziz Osmani moved from an island village to a high school in nearby Chittagong, he had his first taste of Rooh Afza, something of an invented Ramadan tradition in the subcontinent—it’s a scarlet syrup first concocted by an Indian beverage company in 1907, consisting of rosewater, mint, cilantro, watermelon, carrot and other ingredients in a top-secret ratio. (Rooh Afza bottles can be purchased at Kalustyan’s for $5.) “When combined with chilled milk, it’s a wonderful start to iftar,” or the meal at dusk breaking the fast, says Osmani.

Ramadan’s Manhattan debut came with the late-19th-century arrival of peoples from Greater Syria—what is now Lebanon, Syria, Israel and the Palestinian territories. Many of these Arab immigrants, who were largely Christian with a Muslim minority, settled in a group of tenement apartments in lower Manhattan that became known as Little Syria. (The area was largely demolished in 1940 to create the Brooklyn-Battery Tunnel.) An 1899 New York Times article refers to Little Syria as a colony of “3,000 Syrians.”

The author, one Cromwell Childe, noted that the quarter was home to “amazingly pretty girls,” who for some reason failed to humor male visitors to the neighborhood. Arta’s, a restaurant on Washington Street that Mr. Childe visited, offered, among other dishes, “okra, (a vegetable resembling beans,) cooked with mutton,” and “laban, thickened milk, prepared in a peculiarly Syrian way” [i.e., yogurt], both for 10 cents. In all likelihood that laban culture (in both senses of the word) was brought from the Levant to Manhattan via a small piece of cloth that had been soaked in yogurt, dried and folded in paper, allowing an immigrant to literally carry their culture in their pocket to a new kitchen in this new land.

The 1965 removal of ethnic quotas from U.S. immigration policy precipitated a second wave of Muslim Americans to New York and the country. Today Muslim families have settled in neighborhoods across the city, and are diffused throughout Manhattan. Each nightfall this August, their homes will be filled with people breaking their daylong fasts with some of the oldest—and most delicious—flavors in the world.

Of course, with Manhattan lifestyles, it’s not always possible to prepare familiar iftar dishes. “When the sun goes down, I’ll definitely be at work,” says Nilufer Shaikh, a lawyer of South Asian descent who works at a Midtown corporate firm. “At my old firm, the other Muslim lawyer, the cleaning lady and I met to have dates in the conference room,” she says.

Shaikh had just managed a high-heeled run out of her office to Biryani Cart, the food cart at 46th and Sixth Avenue that’s received plaudits from obsessive websites like Midtown Lunch. Meru Sikder, the former Hilton banquet chef who runs Biriyani Cart, which is open 24 hours a day, has produced Iftar Boxes in years past, sold at sun- down, and is gauging interest for this summer. The boxes include seasonal fruits, dates, cucumber, biriyani (of course!) and a Ramadan fried pakora that substitutes lentils for vegetables.

Aside from a Hindu colleague, Sikder and his staff are all Muslim, and spending sweltering August days on Midtown streets with- out food or drink will prove a challenge—especially while serving food. “With the two grills and the steamer it’s like a sauna in the cart,” says Sikder. But a plan is in place. “We bring in extra people for Ramadan so that we can take half-hour breaks every two hours.”

Shaikh resignedly acknowledges that, “This year, I’ll probably just break fast with coffee and a piece of chocolate at my desk.” Then she remembers the traditional item she hopes to include. “Oh, and a date!”

The date is the most common mouthful with which Muslims break the fast the world over. Eating dates at dusk is as old as Ramadan itself: Mohammed is said to have ended his own fast with the fruit, which is among the sweetest on Earth, gives your blood sugar the spike you need, and thus is a staple, enjoyed fresh or dried, depending on Ramadan’s season. (The month-long holiday is set according to the lunar year, and shifts on the Gregorian solar calendar.)

There are over 600 varieties of dates, but two dominate the U.S. market: the caramel-like Deglet Noor (or “date of light,” named be- cause when held to the sun, its inner core appears illuminated) and the Medjool, beloved for its chewy sweetness. The selections in Manhattan, where it’s difficult to find anything beyond Medjool and Deg- let Noor, may pale compared to what’s on offer in the souks of Cairo or Amman, where scores of barrels brim with varieties of myriad color, shape, and texture. Still, for Ramadan Kalustyan’s plans to stock

Party like it’s 999. Ramadan ends with Eid al-Fitr—think Christmas dinner, but with beryani lahim in place of Brussels sprouts, kebabs swapped in for carrots, and Turkish delight instead of turkey.

Barhi dates, which come fresh and apple-like only in August, and Thoory, which is considered one of the finest dried dates. While most dates consumed in the U.S. are grown in California’s Coachella Valley, dates from the Arabian Peninsula, celebrated for their succulence, are in high demand worldwide: Despite, or perhaps because of, the searing climate, the Arabian Peninsula shows archeological evidence of dates being cultivated there for over 8,000 years.
Harun Duman manages Gulluoglu, a Turkish café on Second Avenue at 52nd street specializing in traditional Turkish pastries. For him, any Turkish iftar must have gullac, a dessert made from pomegranate, hazelnut, walnut, phylo dough and milk, and considered a precursor to baklava. A 14th-century Chinese manuscript on Turkic and Mongol food describes gullac, and today the traditional sweet remains an iftar favorite: 85% of gullac in Turkey is consumed during Ramadan.

Gulluoglu imports baklava from Istanbul, but many of their desserts are made here, including a Ramadan favorite called Tavuk Gogsu—a sweet chicken pudding. The chicken is boiled, blended and boiled again, to the point where it’s difficult to detect in the velvety, cinnamon-laced pudding.

These traditional dates, drinks and desserts would be delectable on their own, but fasting takes it to another level. A popular Ramadan fable explains that when you’re hungry, neither flute nor harp nor violin sounds as beautiful as a serving spoon hitting a plate. As the proverb concludes, “The most delicious meal is the meal you eat when you are famished.”

While traveling through Africa, chef Marcus Samuelsson visited predominantly Muslim countries during Ramadan. “The eating is fantastic,” says Samuelsson, who, while not a Muslim himself, joined in the observance. “I remember being in Senegal at Ramadan, eating a large breakfast early in the morning, with a lot of fufu [mashed yams and plantain], and then you don’t eat for the rest of the day. It’s a challenge, especially if you haven’t done it before. But when you break [the fast], it’s empowering to share that experience with everyone else in the country — like a thousand Thanksgivings in one.”

Recipes from Samuelsson’s cookbook Soul of a New Cuisine, such as his chicken and peanut stew, and ful, a dish of fava beans and spices, are inspired by Ramadan meals. Samuelsson also tailors the mashed potatoes he serves at Red Rooster, his Harlem restaurant, to the flavors of north and east Africa.

As for where to get the ingredients for such Ramadan-inspired meals, Samuelsson suggests a visit to Little Senegal, the section of west Harlem where he lives that is home to sundry African merchants. We recommend Darou Salam Market (235B West 116th St.; 212-222- 2658) and Nawel Keur Mame Asta (219 West 116th St.).

The real feasting begins when Ramadan ends. For the three-day celebration Eid al-Fitr, which concludes the holy month, families host banquets, exchange gifts and feast on every- thing from and whole stuffed lamb to rice pudding and pistachio cakes. “In Turkey, kids go from house to house to collect candy, a bit like Halloween here,” says Harun Duman.

But for Duman, the iftar meal is about more than the delicacies to be eaten. “You always make more food and set a bigger table than you need,” he says. In southeast Turkey, where his family hails from, “the whole village could stop by for an iftar. It’s about giving. It’s also to understand the good fortune you have. It’s true you might get cranky during a long day, but you work to develop sympathy for people who don’t have much.”

And he admits there’s another benefit: “It’s not a bad way to lose a few pounds!” But with the various Ramadan specialties on offer for evening feasts, one could just as easily gain a few pounds. It’s not for nothing that in Egypt, the Arab world’s most populous nation, the month of fasting is also the month with three times the normal food consumption.