Edible Island: An Entire Landmass Transforms From a Food Desert to an Eater’s Utopia 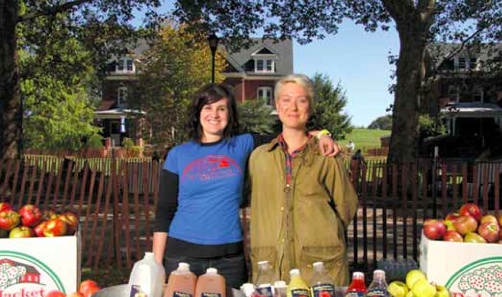 Gotham foodies know the flash-fry speed at which a block or neighborhood can flip from desolation to destination. Now it seems an entire landmass is transforming from a food desert to an eater’s utopia: Governor’s Island, the old U.S. Coast Guard base that shares the lower Manhattan shore with Ellis Island and Lady Liberty. Back in the Coast Guard days, the place was home to two eateries—an Officers’ Club and a Burger King—but both of those shuttered in 1996 when the base was decommissioned and became a ghost town.

Eventually sold to the city for a buck in 2003 (perhaps even less than what the Dutch paid in 1637, when they bought it for one string of beads, two ax heads and a few nails), the sleepy 172-acre space is accessible only by ferry and until recently saw no more action than the occasional walking tour. Those who made the trip found green spaces to rival a liberal arts college campus; remarkable architecture (over 50 landmark buildings, including Federal mansions, Victorian manses and two forts built in 1812); and some of the most spectacular skyline views anywhere.

But if last year was any indication, this island has blossomed not only into a center of cultural action but something of a locavore’s delight. In addition to art exhibits, concert series and Lincoln Center Festival events, the island welcomes barbecuers and beer drinkers and is home to farmers, fishers and (get this) chestnut growers, at least inside the lovely stone ruins of Fort Jay, where the National Forest Service is coddling a few saplings, planted in 2008 by the Department of the Interior.

They added five American chestnut trees to the island, the very first in a national program to bring back the variety wiped out by a blight inadvertently introduced in 1904. These spectacular trees had dominated Eastern forests for 40 million years—Governor’s Island, in fact, was originally called Pagganck (“Nut Island”)by Native Americans—and were so widespread the American Chestnut Foundation says a squirrel could walk from Tennessee to Maine touching only the interlocking branches of this species.

Nuts are not the only harvest in the works: With the help of Long Island oyster farmers, the on-island Urban Assembly New York Harbor School, part of the city’s public school system, is training hundreds of high-schoolers to grow oysters near the ferry terminal as well as to raise fin fish and shellfish and other harbor species in massive tanks. There’s also an uber-eco aquaponics setup in which tilapia will be farmed symbiotically with organic produce.

There’s even a produce patch. In 2009 the Governor’s Island Preservation and Education Corporation began leasing three acres for a farm—complete with bees and chickens—to Added Value, the nonprofit that operates a similar venture just across the water in Red Hook, Brooklyn. Plans include a small island market for selling flowers and a few other goods; because the corporation can only renew projects for a year at a time, most of the food grown on G.I. will go to Added Value’s existing CSA, farmers market and restaurant clients.

Meanwhile, across the harbor on the very tip of lower Manhattan, there’s another waterfront farm in the works—the first open-to-the-public rows in the city. Called the Urban Farm at the Battery, it’s got a lovely fence made from repurposed bamboo, is ready for volunteers eager to get their hands in the soil and hopes to supply at least a part of the produce headed to the new food concessions opening in the park this year.

And then there are the island’s gastro-bashes: Last year the island hosted NY Beer Fest in June (more than 100 breweries poured craftbrew); Meatopia in July and Pig Island in September, both beery barbecue festivals and sustainable meat free-for-alls. This year both return, along with a Brewer’s PicNYC on May 29 and 30, including street food carts and a craft beer garden; on July 10 there’s Cook Out NYC as part of Good Beer Month, with local breweries pouring while professional barbecuers and chefs slow-cook heritage meats and grill vegetables grown right on the island by Added Value. On top of that, most weekends there’s locally made ice cream and other stands, plus an outpost of Long Island City’s Water Taxi Beach selling burgers, brews and hot dogs. Or pack your own and head to the flock of bright red hammocks installed on a grassy patch somebody smartly christened Picnic Point.

But the way things are changing in this once-abandoned isle, we’ve got our fingers crossed for a flock of sheep and a field of hops.