Old-school on a barstool at the Carlyle Hotel. 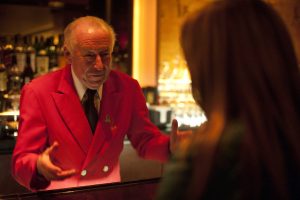 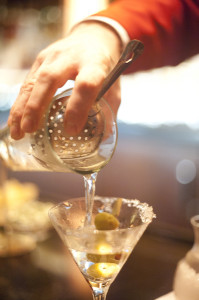 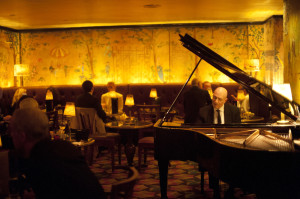 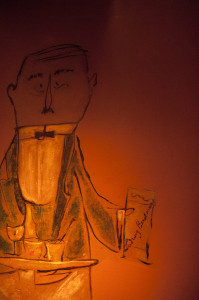 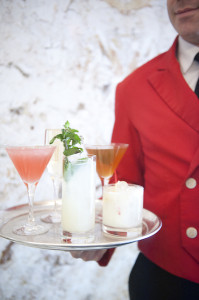 In the last few years, a few of the paragons of the modern mixology movement have tried to recapture the lost art of the Manhattan hotel bar. They’ve romantically revamped the drinking dens of fusty old Midtown hotels like the Edison and Iroquois, bringing in sophisticated decor, soft lighting, cool music, jacketed barmen and old-fashioned service.

Thirty blocks to the north, Bemelmans Bar has observed this phenomenon with blasé bemusement. The Upper East Side landmark has been quietly keeping the hotel-bar torch burning for nearly three-quarters of a century inside the upper-class residential fortress known at the Carlyle. Its stature is shared by only a couple other surviving standard bearers: the Old King Cole Bar in the St. Regis and (until it recently closed—again!) the Oak Room at the Plaza.

Managing director Erich Steinbock isn’t shy about stating why he thinks Bemelmans has retained its prestigious standing over the years. “I call it a real bar,” he says. “First of all, there are no TVs. It’s conducive for people to talk to each other. It’s a little more formal. There aren’t so many great freestanding bars anymore. There are sports bars and Irish pubs, but you don’t find many bars like this.”

Bemelmans already has all the things that the taverns mentioned above are after. The banquettes are plush, the music is oldstyle sophisticated and plays nightly, and the light from the tiny lamps on the tiny tables bathes everyone and everything in a cinematic amber glow. But it also possesses a couple things the parvenus downtown will never have. The namesake murals, first and foremost. Executed by illustrator Ludwig Bemelmans, creator of the Madeline series of children’s books, they depict the four seasons in Central Park, a whimsical world of frolicking bunnies, snakes in hats, a sheep-filled Sheep Meadow and monkeys who peer in at caged bankers.The artworks’ enveloping presence makes certain that wit, art and New York café society history will never quit the room.

Running a close second in exclusivity is Tommy Rowles, a small Irish bartender who was hired in 1958. A local legend, he has wiped down the same bar for 53 years and has never had another job. Any reporter who walks into Bemelmans wants to bend Rowles’s ear, and you get the feeling that the man’s developed an earache. “The stories I have you can’t print,” he says offhandedly, in an accent whose Gaelic lilt has been sandpapered down over the years. The stories that can be printed have been printed, again and again. They involve dead people, mainly. There’s the one about Harry Truman ducking in for an Old Grand-Dad Bourbon on the rocks in order to escape an army of reporters camped out on Madison Avenue. And the ones about serving Jackie Kennedy, but not having served Jack. (He did wait on Bobby and Teddy; the Kennedys have made the Carlyle their Manhattan compound for more than a half a century.)

Rowles certainly has other tales locked in his memory bank, but under lock and key they will stay. For this is the Carlyle, where the obsession with guest privacy can be, well, obsessive. “People come here from good homes,” says Rowles, “and one thing you don’t do is screw them up with what you talk about. That goes for any good home, but the rich especially.”

Rich, indeed. By management’s guess, 25 percent of Bemelmans patrons are hotel guests (rates begin at $800 a night); the other 75 percent come from hotels and homes in the immediate area. These folks have no difficultly complying with the formal, if unofficial, dress code, or affording a $285 ounce of Beluga caviar with their $21 cocktail. Or relating to the 14K-gold-covered ceiling.

If the Carlyle management and Tommy are nobly keeping mum on the subject of the Bemelmans clientele, the gossips on Yelp! aren’t nearly as discreet. “Older men are dressed with the kinds of things that the Thurston Howell IIIs of this universe sport,” writes one Yelper, in a particularly piquant portrait of a typical evening at Manhattan’s swankest saloon. “The ascot, the blazer decorated with buttons of precious metal, and slip-on dress shoes of fine velvet embellished with their initials.” On a given night, “Steve Martin is surrounded by a coterie of admiring ladies, dapper in his tux and retro rimmed glasses,” while “Al Pacino [is] at the bar (looking a little rough and ready in a hoodie), and at a table just the other side of the piano is Jean Reno.” As for practical advice: “If you want to be ignored, show up in a T-shirt and jeans. It works!”

Before finding fame at Pegu Club, cocktail-world doyenne Audrey Saunders ran the liquor program at Bemelmans from 2001 to 2005. She has her own assessment. “It feels like a modern-day Ricks Café Américain,” she says, referencing the famous, fictional watering hole in Casablanca. “It’s a very upper-crust crowd in the best sense of the word: They all have such polish, such grace, such elegance, a détente attitude. I loved looking after them. There was a small group of gents that I admirably referred to as my White-Haired Lions—semi-retired business titans who I looked up to as mentors—they would come into the bar and sit down with me, and we would always have such enjoyable, stimulating conversations together. They continually showered me with nuggets of wisdom.” (Saunders has a reason to remember Bemelmans warmly; she met her husband, Robert Hess, there.)

Saunders was hired soon after the Rosewood Hotels chain of luxury hotels and resorts took over the Carlyle in 2000 and refurbished the bar. The company, looking to refresh Bemelmans’s image, brought in as a consultant cocktail legend Dale DeGroff, who helped kick off the cocktail renaissance with his retro work at the Rainbow Room in the late 1980s. DeGroff recalls, “They wanted me to redo the work manual for the bar, do training sessions and write a new cocktail menu that at least brought the bar into the late 20th century.” But DeGroff had his work cut out for him, for the Carlyle is a union hotel, with union bartenders. “There were a lot of issues,” he says. “You had Rosewood coming in. They weren’t quite prepared for the strong unions, specifically Local 6. The least senior guy was 17 years on the job. Those guys looked at me like a side dish they didn’t order.”

Tommy, in particular, was recalcitrant—but in a charmingly Irish way, of course. He refused to serve an ornate oyster shooter drink DeGroff devised because it contained food. “‘You know it’s such a pleasure to be working for you, you’re such a famous young man,’” says DeGroff, doing a spot-on Tommy impression. “‘But I won’t be able to serve the oyster shooter. It’s such a lovely drink, but I can’t handle food. I can’t go against the union, after all these years, what would happen?’” The oyster shooter was struck. But many other fine drinks were added.

When asked whom to hire to manage the new program, DeGroff recommended his protégé, Saunders, with whom he had worked at the short-lived restaurant Blackbird. “Dale had just begun the initial process of overhauling the liquor inventory, getting glassware samples, working on the cocktail list, the uniform design, everything … soup to nuts,” says Saunders. “After Dale left, they asked me to evolve the menu for the next season. When they saw how well it was doing, they basically gave me the keys to the car the season thereafter and told me to drive.”

As a nod to the Saunders era, a couple of her inventions—the Gin-Gin Mule and the Old Cuban—remain on the menu. Today, it’s the dapper and elegant Brian Van Flandern who switches up the cocktail menu seasonally. But, for all of Saunders’s and Van Flandern’s efforts to keep the drinks program cutting edge, only a fraction of the clientele truly take notice. “This being such a traditional bar, you have to have the traditional drinks,” says Steinbock. “You have your Sidecars, your Manhattans. You can never go away from that. Seventy percent of our guests drink the same drink they’ve been drinking for decades. They don’t change at all. And the other 30 percent change constantly.”

For most of the regulars, “the usual” is a Martini, says Rowles. In that way, the bar and its fans remain steadfastly rooted in the Mad Men era—as does Tommy, who, in his Eisenhower approach to the iconic cocktail, finds little use for vermouth. (One gets the impression, in fact, that he doesn’t put any vermouth in his Martinis.)

Bemelmans is at least the second name this space has worn. After all, the illustrator painted the murals in 1947, and the hotel has been around since 1930. In its first flowering, the bar—along with the areas now know as the Gallery and the Carlyle Restaurant—was known under the umbrella title of the Carlyle Regency. Ludwig Bemelmans was hired to do the murals by then-owner Robert Dowling. (How long after that his name was given to the bar is not known, but it was regularly referred to as Bemelmans Bar by the mid-’70s). Perhaps the most surprising thing about the murals is that they are no longer 100 percent Bemelmans’s handiwork. “Not all of it is original anymore, it’s been touched up so much,” says Steinbock. (After 65 years hanging around a bunch of drunks, you’d need a little help, too.) Inspect the murals closely and you’ll find telltale signs of updating. The rabbit in the far corner, for instance, is wearing roller blades and headphones. When the room was restored a decade ago, the murals had been darkened by years of exposure to nicotine. “The best way we found to get it off was Wonder Bread,” says Steinbock. Wet Wonder Bread, specifically. Slice after slice was applied to the walls.

Smoke is no longer a problem in Bloomberg’s New York, but the room still suffers wear and tear. Recently a steam pipe hidden within a painted column at the center of the bar burst; the illustrations on the pillar will have to be completely recreated. For such jobs, the Carlyle has seven painters on payroll. “You need them in a place like this,” observes Steinbock. “Those guys have a full-time job.”

The painters better get it just right. Ironically, for a hotel that has changed hands a good number of times over its history, the thing the Carlyle’s cosseted denizens crave most is constancy. They don’t want anything about the hotel to change—and at Bemelmans, they largely get their wish. The murals remain the murals; Tommy stays Tommy; Chris Gillespie can be found playing the cocktail hour every night Tuesday through Saturday; and the Loston Harris Trio faithfully arrives those same days with some after dinner music. (The piano is tuned a few times a week.) Sometimes the singers who appear over at the Café Carlyle, the swank cabaret spot just across the corridor, will drift in and jam with the Bemelmans boys. But that’s about as much as things shake up.

When Tommy finally retires, it will be a shattering day. The man not only provides a throughline to the Bemelmans Bar’s storied (or, more exactly, purposefully un-storied) history. He also contributes a welcome blue-collar antidote to the saloon’s blue-blooded atmosphere. Decades after stepping off the boat, his rough, salt-of-the-earth edges haven’t entirely been polished smooth. His hobbies, he says, include partying.

And what is Tommy Rowles’s idea of a good party? “I’m Irish,” he says. “What do you think?”