Unilever — maker of blockbuster brands like Lipton, Knorr, Vaseline, Skippy, Dove, Klondike and Slimfast — is in a tizzy over a groundbreaking, data-driven maker of mayo. And the debate is only starting. 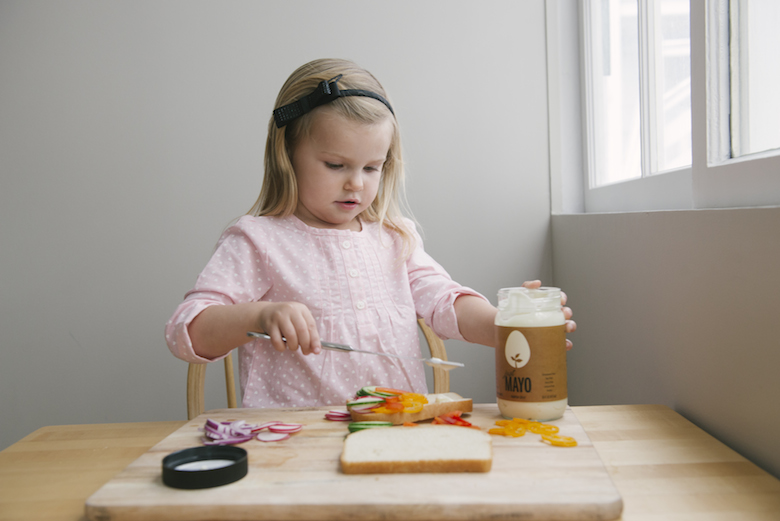 DECEMBER 26 UPDATE: The holidays came early for the food maker Hampton Creek. A few days before Christmas, the company closed a $90M Series C round of funding (including new investors, Salesforce founder Marc Benioff and Facebook founder Eduardo Saverin), with plans to expand in Europe and Asia and to complete the renovation of Hampton Creek’s new 100,000 square foot headquarters in a former chocolate factory in the Mission. And then, “to our surprise,” according to communications head Morgan Oliviera, Unilever dropped its lawsuit against the startup. Along the way, the firm generate serious press from Jezebel and made a return appearance on CNBC’s Mad Money, where Hampton Creek founder Josh Tetrick presented host Jim Cramer with a head sculpted out of cookie dough to pump what is sure to be its next blockbuster product. Watch out, Nabisco (Oreo’s, Chips Ahoy). You’re next.

Some have dubbed it Mayogate. On October 31, multinational food processor Unilever, maker of Hellman’s mayonnaise, sent a cease-and-desist letter to San Francisco-based Hampton Creek Foods citing the start-up’s vegan “Just Mayo” sandwich spread as misleading because mayonnaise, by USDA definition, must contain eggs. The suit backfired in a blaze of PR glory — Hampton Creek is basking in free media (CNBC, Grub Street, New York Times, even David Letterman) and announced that sales surged threefold, while just yesterday Unilever was accused of scrubbing its own website of reader comments that might weaken the suit. Hoping to cream an egg-less competitor, this $70 billion firm instead got egg on its face.

But why is Unilever, maker of blockbuster brands like Lipton, Knorr, Vaseline, Skippy, Dove, Klondike and Slimfast, feeling so threatened by this obscure, new food maker? And why is every large food brand watching from the sidelines and wondering if they will be next?

Until now, most egg-less mayonnaise alternatives — Nayonaise, Vegenaise, Mindful Mayo — have dwelled in obscurity at the edge of grocery aisles. Small-batch and regional mayos like Sir Kensington’s, Empire Mayonnaise and Duke’s are uber-delicious, but eat up relatively low market share. Hampton Creek has enjoyed a meteoric rise. Less than a year ago, the brand had no products on store shelves — now Just Mayo is in 20,000 stores including Target, Dollar Tree, Costco and WalMart. Ostensibly, not just because it’s tasty (it’s Sriracha and Chipotle flavors are particularly popular), but affordable, too. It’s the top-selling mayonnaise at Whole Foods Market and is becoming the favorite for chicken salad at top food-service operators Bon Appetit and Compass Group. Cue lawsuit.

The “MayoWars” are drawing new battlelines in the global food discussion, and helping to solidify a new ally for the eaters aiming to fix the food system. Many in the food movement — conscientious chefs, rooftop farmers, nano-brewers, produce-peddling parents — are just starting to hear the term “foodtech,” the coming together of data, technology and food that Danielle Gould of Food Tech Connect calls “the most radical transformation of our food industry since the Green Revolution.”

This space is already populated by well-known companies like OpenTable, FreshDirect, Seamless, and Food52, but Hampton Creek is the first one producing something we might put in our mouths every day. While press on Hampton Creek had been largely restricted to tech media (TechCrunch, Fast Company, Inc.), the lawsuit landed them on USA Today, NPR, and the Los Angeles Times. A vegan activist posted a 12-minute Youtube skreed blasting Unilever for not respecting consumer preferences, while a whole stampede of anti-agribiz voices entered the fray to defend this David against Goliath — investigative journalist Maryn McKenna at National Geographic’s The Plate and attorney Michele Simon at EatDrinkPolitics, who have long been hounding Unilever. Mother Jones even did a taste test, calling Just Mayo “velvety” and Hellman’s “clumpy” and “salty.” 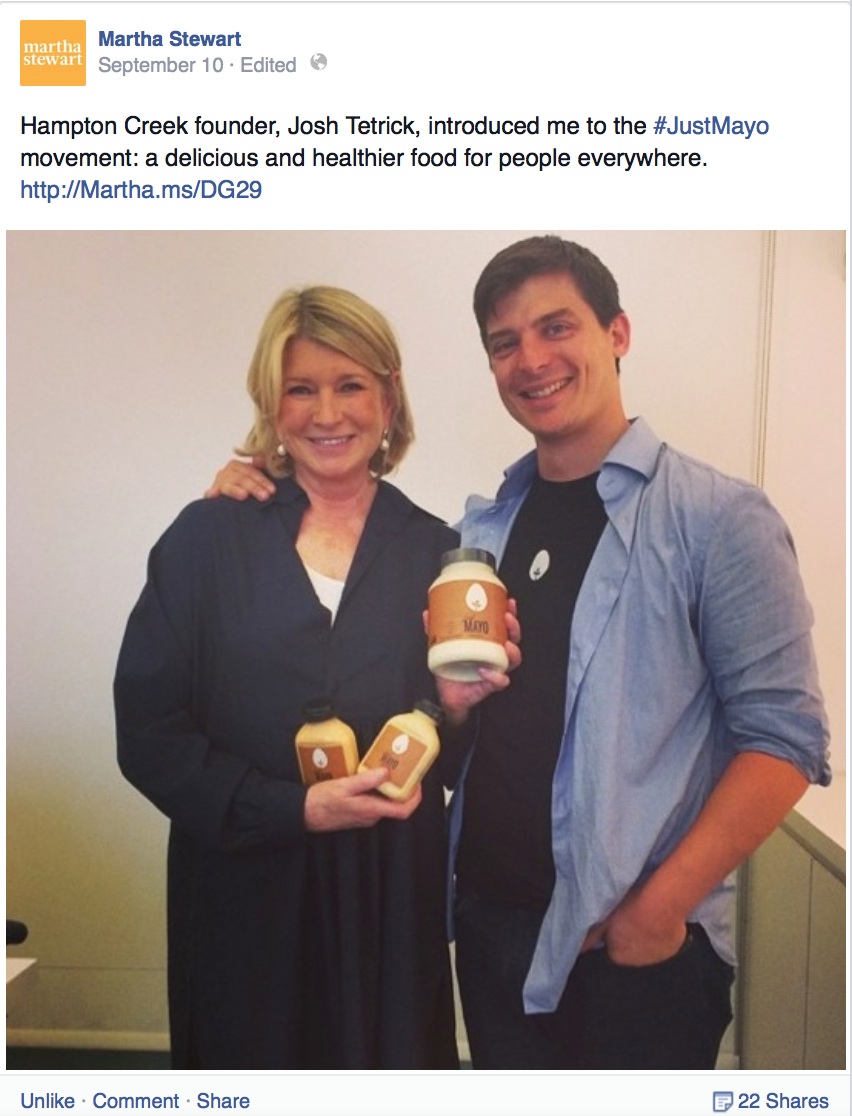 Martha Stewart is among those celebrity chefs and tastemakers who have endorsed Hampton Creek products. Courtesy of Marta Stewart Living, via Facebook

Now, the food movement hasn’t just heard about startups like Hampton Creek. It has found an ally with a common enemy: industrial food production. As Kate Murphy wrote in a New York Times opinion piece on the rapidly growing foodtech space (investors plowed in $4 billion in the first half of 2014 alone), “despite their radically different approaches, the high- and low-tech culinary camps share a common desire to create a more sustainable food supply and, less loftily, to capitalize on people’s appetites.” The lawsuit echoes earlier food fights between entrenched companies and the upstarts. Think back to big dairy’s fear-mongering about raw-milk cheeses and their failed attempts to ban them in the United States. Or the 2006 lawsuit by a consumer against Kraft for calling its avacado-less dip “guacamole.” Or the futile campaigns of Monsanto to restrict companies like Ben & Jerry’s from saying they used milk from hormone-free cows. (Ironically, Ben and Jerry’s is now owned by Unilever, although it still maintains its same labeling policy.)

But something is clearly different about this one. As Nathanael Johnson of Grist points out: “Unilever is the corporate giant, fully enmeshed in conventional agriculture. Yet it is the partly arguing for the principle of real food — for mayonnaise that your grandmother would recognize as mayonnaise.” (Double irony for the maker of “I Can’t Believe It’s Not Butter.”) Interestingly, Unilever has been recognized as a sustainability pioneer. In 1997, it was the driving corporate force behind the creation of the Marine Stewardship Council and still buys certified sustainable seafood for its frozen fish fillets. For the last four years, it has been voted the most sustainable global brand, besting even Patagonia. And last year it began buying only cage-free eggs for its products, including Hellman’s and Ben & Jerry’s, although its laying hens are still raised in massive confinement operations.

Ever nimble, Hampton Creek has used the suit as a sales opportunity. CEO Josh Tetrick jeered at Unilever over twitter posting “BREAKING NEWS: The horse and buggy industry sues Ford Motor Company for taking away market share.” Tetrick quotes Unilever’s own CEO, Paul Polman advocating for disruption: “Success will require completely new business models. It will demand transformational innovation.” Hampton Creek has already gotten ample mileage out of a David-and-Goliath-esque cartoon showing a slingshot-wielding jar of Just Mayo knocking a massive Hellman’s tub off its base. A proud parent posted a photo of twin boys giving a thumbs up to Just Mayo and a grimaced thumbs-down to Hellman’s. Andrew Zimmern, the Travel channel chef and an advisor to Hampton Creek, started a petition, “Tell Unilever to Stop Bullying Sustainable Food Companies,” that has already garnered over 25,000 signatures. Hampton Creek, meanwhile, has announced it is readying a countersuit.

In a nutshell, everything about how Hampton Creek operates is different. That means they can move wicked fast with a minimum of resources. At their headquarters south of Market in San Francisco, chefs sit side by side with engineers, bioinformatics specialists, data-crunchers and biochemists. This proximity encourages brainstorming on solutions, rapid prototyping and interactive feedback that was profiled in great detail by Wired. “We can run our [recipe] experiments in the cloud rather than always having to grind ingredients up and trying them out in a recipe,” Tetrick told the Times this past summer.

The power of bringing this Silicon Valley approach to food echoes a prescient op-ed in the Wall Street Journal titled “Software is Eating the World” (and updated in a slideshow) in which tech pioneer and investor Marc Andressen argued that more and more business are “being run on software and delivered as online services,” allowing them to deliver entertainment, healthcare, even food, cheaper, faster and better than existing firms, with a fraction of the staffing and capital. Faith in Hampton Creek’s new model for producing food has attracted investment from Bill Gates, Hong Kong mogul Li Ka-shing and other future-minded entrepreneurs.

The big tool in the Hampton Creek’s software kit is a database it is building of the world’s agricultural plants and their characteristics. It’s still in its early stages — Hampton Creek has logged 4,000 plants, and hopes to do hundreds of thousands — but has already been used to create Just Mayo, as well as several flavors of Just Cookie Dough, Just Cookies, a high-protein fresh pasta, an egg-free egg-like product called Just Scramble and countless allergen-free foods in the test phase. Think of it sort of like a massive digital pantry used to create not just mayo and cookies, but butter, ice cream, pet food and any popular food product.

Admittedly, Hampton Creek’s products are all “processed,” even if they avoid soy oil, corn syrup and other no-no’s. In other words, they do not adhere to Michael Pollan’s rule of eating only foods your grandmother would recognize. Still, these are foods with higher aspirations than their grocery shelf neighbors. Each of the plants, and plant proteins, in the database have been ranked for taste and texture characteristics, as well as abundance, affordability and sustainability, allowing the company to optimize for those traits as well as flavor. It reports that because it depends on plant-based ingredients, producing Just Mayo generates 157.3 grams of carbon less per jar than a jar of Hellman’s. (No major food brand is bragging about its carbon footprint.) Down the line, the database could be a big assist to food makers seeking a lower water footprint or trying to swap out a newly discovered allergen. It has already encouraged the use of neglected crops like yellow peas and sorghum, over monoculture culprits wheat and cotton. ”What would it look like if we started over?,” Hampton Creek founder Josh Tetrick is fond of asking. “This question forces thinking in leaps over tiny steps.” 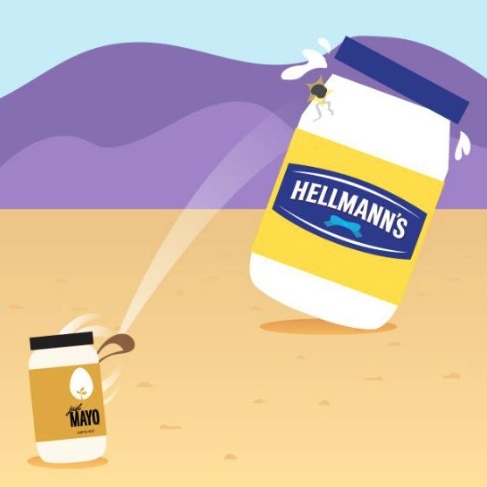 But I’d wager that Hampton Creek’s real special sauce is its earnestness, as more and more consumer research shows that Millenials seek out products with mission, purpose and story. On a recent visit to Hampton Creek’s lab, when I asked staff why they worked for Hampton Creek, I heard again and again that they were inspired by the goal to replace unhealthful, industrial foods and the potential to have a massive impact. “When I was at Google our user base was 1 billion, with Hampton Creek our potential user base is 7 billion, everyone on the planet,” said Dan Zigmund, Hampton Creek’s VP of Data, and formerly head of data at GoogleMaps. Zigmund was attracted by Hampton Creek’s cross-platform workspace, where he could hack big world problems shoulder-to-shoulder with chefs and nutritionists.

“It’s always kind of killed me to look at the shelves at a grocery store and realize that is what so many people choose,” said Trevor Niekowal, a chef at Hampton Creek who previously worked at the molecular gastronomy restaurant Moto. “They choose it because it’s cheap and it’s very accessible. I’m excited to be on the team where we are making the healthier choice affordable and insanely delicious.” It’s not clear anyone at Hellman’s feels the same way. “A lawsuit gives us the opportunity to talk about the things that matter,” Tetrick told the Washington Post. “So we’ll take it.”