Tastes of Spain, France and Italy: A Lesson in Early Harvest Olive Oils

Olive oil producers from France, Italy and Spain recently joined in public conversation about early harvest oils. Lucky for us, we had a chance to taste and compare. 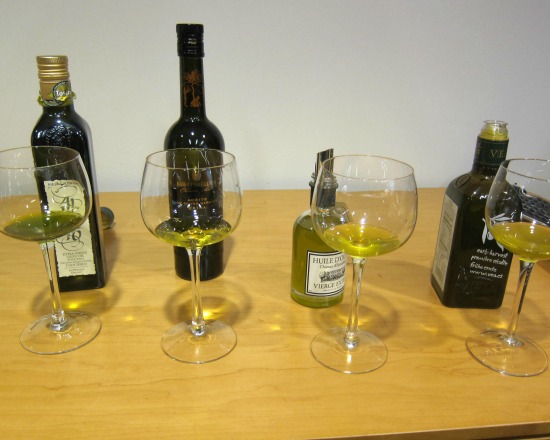 Earlier this month at an event hosted by David Rosengarten, olive oil producers from France, Italy and Spain joined in public conversation with some of New York’s leading olive oil experts. Along with other attendees, we learned more about the ins and outs of the olive oil world, as well as some special products from these respected olive oil producers. Lucky for us, we also had the chance to taste and compare some exclusive oils including four early harvest bottles from VEÁ, Château d’Estoublon, Marques de Grinon and Badia a Coltibuono.

What makes early harvest oils different from other oils, you ask? As you might expect, olive oil production revolves around the very short amount of time when olives are ripe. Oils made from olives that are picked early are considered to be exceptional since they tend to to be greener and have a unique taste from the rest of the harvest.

Because of the delicate nature of these olives though, the time from harvest to bottling must be very fast. Remy Reboul, the producer of Château d’Estoublon from the Provence region of France told us that “[T]he extraction process is very simple — just extracting the fruit juice out of the olive — but it must be done quickly. The process is just 45 minutes so that the pure expression of the olive is present in each bottle of oil.” Given the traditionally precarious nature of bottling these young oils, they were only recently made available for purchase in the U.S.

Curious to try these oils for yourself? The olive oil producers suggest drizzling these fresh young olive oils over your favorite dishes, or just enjoying with your favorite artisan bread. In other words, save your older extra-virgin olive oils for cooking; these oils should be sampled fresh from the bottle.

Here’s our analysis of these four early harvest bottles, as informed by the experts:

VEÁ Early Harvest Extra Virgin Olive Oil — Sarroca de Lleida, Spain
This oil has a cloudy green color and is unfiltered. It has a flavor that invokes green tomatoes, artichokes and almonds. It also has a clean finish.

Château d’Estoublon AOP Vallée des Baux — Provence, France
Château d’Estoublon’s filtered oil is a light green with yellow highlights. The flavor profile is mild with a wheatgrass flavor that ends with a delightful peppery note at the back of the throat.

Badia a Coltibuono, Albereto Organic Extra Virgin Olive Oil — Chianti, Italy
This strikingly beautiful oil is a bold emerald green color. It has a strong flavor of grass and asparagus with a peppery finish that lingers.