Located seven miles south of Burlington on Lake Champlain, the farm’s beautiful formal gardens, turn-of-the-century furnishings and National Historic Landmark designation owe their existence to the fact that the inn began as the country home for a branch of the Vanderbilt family. 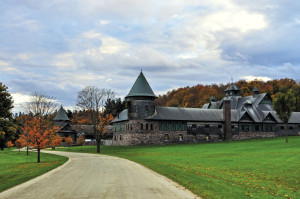 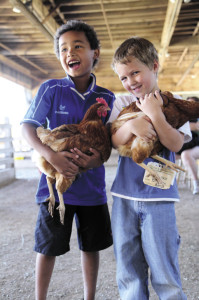 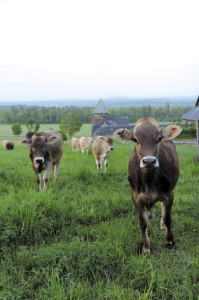 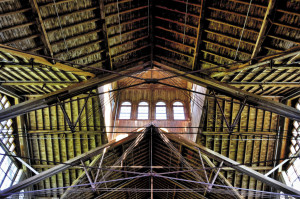 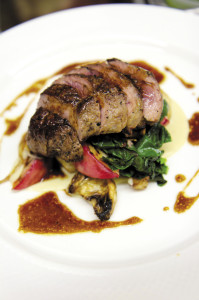 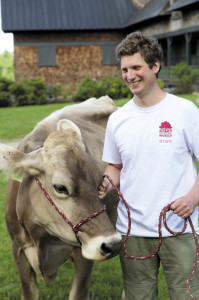 After all, the estate was created over a century ago to provide all that and more for one of the wealthiest families in American history. Located seven miles south of Burlington on Lake Champlain, the farm’s beautiful formal gardens, turn-of-the-century furnishings and National Historic Landmark designation owe their existence to the fact that the inn began as the country home for a branch of the Vanderbilt family. Today it welcomes many thousands of families a year, landed gentry status not required.

From its beginnings in 1886, Shelburne Farms was a place of idealistic aspirations. Its founders, Eliza (Lila) Vanderbilt Webb and Dr. William Seward Webb conceived it as a model country estate showcasing the latest in agricultural science and technology. Financed with a $10 million inheritance (upward of $35 million in today’s dollars) from Lila’s father, second-generation railroad magnate William Henry Vanderbilt, they amassed about 3,800 acres of verdant Vermont land.

They spared no expense: landscape starchitect of the day, Frederick Law Olmsted, famous for co-designing Central Park itself, divided the property into farm, forest and parkland, planning roads to accentuate pastoral vistas and planting trees to shape ever-changing views as visitor walked or rode through the estate. Prominent architect Robert Henderson designed a 110- room “cottage” for the Webbs, which included 13 chimneys and a separate wing for entertaining, all equipped with state-of-the-art indoor plumbing, centralized heat, electric light and telephones.

The livestock lived in luxury, too. For them, Henderson designed what Smithsonian magazine called “the grandest and most imaginative barns constructed on American soil,” anchored by the Farm Barn, a turreted, brick-faced building that showed off cutting-edge late-19th-century technology: Steam-driven elevators moved crops and hay throughout the building, which included telephone and telegraph stations. And in Robertson’s Breeding Barn, a massive structure with a soaring peaked roof, Dr. Webb pursued his goal of breeding prize horses and creating one of the most important horse farms in the country.

Well into the 20th century, family, friends and visiting notables filled Shelburne House’s (as it was then called) 22 guest bedrooms, spending their days boating, swimming, playing tennis, croquet, golf or, during winter, tobogganing and skating. Active days were crowned with formal eight-course dinners and theatrical or musical performances.

Eventually, though, the farm’s glorious heyday came to an end. Dr. Webb found he had miscalculated in thinking that horses would be the key to Vermont’s future. Starting around 1910 the Webbs cut back on farming operations. Eventually most of the horses were sold. After Lila’s 1936 death, the house gradually fell into disrepair. During the late 1960s, Lila and William’s grandson, Derick Webb, managed a dairy on the property. “It was a challenge for him to make it financially sustainable,” says Alec Webb, one of Derick’s six children and now president of Shelburne Farms.

By the 1970s, the family fortune had dissipated and pressure was mounting on the Webbs to begin selling portions of the farm. Instead the siblings, spurred by the social and political shifts of their generation, their connection to the land and a growing environmental awareness, found a way to save the estate by opening it to all: They decided to turn it into a world-class center for conservation and environmental education.

They incorporated as a nonprofit in 1972 with no assets, infrastructure badly in need of repair, and a big dream. Webb credits the Shelburne Farms board of directors — members recall collapsing ceilings, bat droppings in the buildings and even the occasional dead animal — for raising millions to help restore the property while developing a full slate of educational and public programs.

Almost 130 years after its founding, Shelburne Farms remains a progressive, diverse farm and a recreation destination, only now open to the public. A fee of $8 for adults and $5 for children grants one-day access to the trails, the Children’s Farmyard and a glimpse into the cheesemaking process. Visitors can tour the organic garden and composting operation, meet the livestock, including a small beef herd, a flock of sheep and a grassfed herd of dairy cows. They can also see maple sugaring and learn about the careful management of 400 acres of woodlands, home to a healthy wildlife population of hawks, osprey, kingfishers, woodpeckers, coyotes and even the occasional bobcat. The magnificent Shelburne house, meanwhile, has been transformed into a landmark inn and restaurant that draw crowds May through October.

A getaway at Shelburne Farms can range from 1800s-esque indolence (dining on the patio overlooking Lake Champlain, reading on an Adirondack chair, smelling the spring lilacs, peeping at the spectacular autumn leaves or lounging in sumptuously restored rooms) to active and educational (walking along more than 10 miles of trails, tennis or croquet on the lawn, swimming or rowing on Lake Champlain). Many visitors plan their stay around events like farmstead cheesemaking workshops, kids’ classes, an autumn harvest festival, formal garden tours and teas and mushroom foraging jaunts.

Shelburne’s 100 beautiful Brown Swiss cows were the first milking herd in the state to be designated “certified humane,” and most of their rich milk becomes prize-winning English-style farmhouse cheddar, thanks to the talented work of head cheesemaker Kate Turcotte, who leads hands-on artisanal classes and a monthly behind- the-scenes “Sun to Cheese” workshop that begins with grass’s photosynthesis. She and her staff of three produce 170,000 pounds of cheddar a year — including smoked, aged and clothbound — making Shelburne Farms one of the largest farmstead cheesemakers in Vermont. To age its natural-rind clothbound cheddar, Shelburne partners with Cellars at Jasper Hill Farm in Greensboro, Vermont, where expert affineurs tend to them in high-tech cheese caves.

True to the Webb family’s original vision, the nonprofit is dedicated to education as recreation. It helped launch the over 2,500-member Farm-Based Education Network, is a leader in Vermont’s Farm to School program and offers on-site education for young people and professional development for teachers on sustainability, food and agriculture. The Farm Barn now houses the Children’s Farmyard, the cheesemaking operation, the McClure Center for School Programs (which offers regular farm education classes for under-served kids) and a number of on-site partners, including a bakery, furniture maker and even an independent elementary school.

And while Shelburne Farms is a locavore wonderland, it’s also trying to live the “act global” maxim, says Megan Camp, the farm’s vice president and program director. To that end, in 2008, she helped launch a partnership with like-minded organizations in Japan and China. Cross-cultural “learning journeys” allow participants to compare different approaches to common challenges of food safety, systems and security, and how to serve more healthful food in schools.

Closer to home, Shelburne Farms spearheaded an effort, aided by Senator Leahy, to obtain a CDC grant to survey farm-to-school programs. They found that kids in cafeterias that source produce from local farms ate twice as many fruit and vegetables than the nationwide average, and that students who have met a farmer are more likely to have positive attitudes toward eating these foods.

Which brings us to the Children’s Farmyard, where a chalkboard list of the day’s activities begins with a “Chicken Parade” to kick-off the morning at 10:30 a.m., followed by “Milk a Cow!” “Meet a Lamb!” “Brush a Rabbit!” and perhaps the slightly less enticing “Farm Chores!”

One sunny afternoon, a group of fifth-grade boys were visiting newborn lambs. “Everyone was jumping and running, they were so excited to see them,” recalls school programs director Linda Wellings. Asked what would become of the lambs, Wellings answered, “Many of them will be eaten at our inn.” Shocked, the boys called her “mean.” She answered matter-of-factly, “Well, that’s where food comes from.” A beat later, one boy exclaimed, “I love lamb chops!”

Wellings saw the realization dawn in the boys’ eyes: “Oh, this is where food comes from.” What the children do with this realization, whether they become vegetarian or conscious omnivores with an understanding of and reverence for the plants and animals that nourish them, is up to them. Either way, Wellings accomplished her mission. Like the farm’s itself, her goal is to help educate for a sustainable future and help visitors make connections between the food on their plate and the land, animals and people who produce it. Something Lila Vanderbilt might not have foreseen, but would surely have approved of.

“Our goal is to get kids here to have a good time,” says Rachel Cadwallader-Staub, farmyard manager and educator. “If, through these interactions, they get in touch with food and fiber (kids can also card and spin wool at the farm), that’s awesome. They’re going to grow up and become consumers and hopefully they’ll think about where their food comes from and put the farm on the table… I truly believe that what we do here is going to shape our future.”

Watch a video on Shelburne Farms’ world-class environmental education — and learn why you have to love a place before you can save it — here.