After 20 Years, a Hamptons Food Gala Proves the Trip East to Eat is Better Than Ever 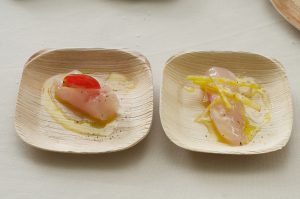 SOUTH FORK–July has become a very packed month for major food functions here in eastern Long Island. Mid-month, there was the inaugural Taste of Two Forks, with a noteworthy showing of local talent, and just last weekend the Hayground School (home to a very good Friday afternoon farmers market) hosted its annual Great Chefs dinner. Slotted in between was Chefs and Champagne, the James Beard Foundation gala that celebrated its 20th anniversary with another memorable evening at Wolffer Estate Vineyards, complete with star-studded food personalities (see above), a papparazzi of food and drink bloggers (see this post), and some ultra tasty dishes drawn from the wide sphere of influence that James Beard Foundation enjoys.

It was an impressive showing, with many veteran attendees commenting on the caliber and creativity of this year in particular. And that might have had something to do with the ingredients used. Chefs from even farflung places (the West Side of Manhattan!) paid serious homage to our area’s straight-up summer ingredients.

Consider the corn. The walkaround tasting event–complemented by beer, wine and champagne stations throughout–featured loads of delicious interpretations on sweet corn, including a panna cotta with marjoram and chanterelles a la Grecque from Kerry Heffernan of South Gate and the gooey corn pudding that went along with the Texas tenderlion from Hill Country in the Flatiron, and the chilled corn soup with marinated bass and tomatillo-cilantro puree from Marcus Samuelsson of the Red Rooster in Harlem. Lobster made another big showing in a New Englandy tribute that included Italian-style lobster rolls with fennel and sea salt potato chips from Missy Robbins of A Voce and Barnegat light lobster with lemon ricotta and micro-sorrell from Michael Weisshaupt of Restaurant Latour at Crystal Springs Resort in Hamburg, New Jersey, and the Yellow Basinga tomato gazpacho with Maine lobster, watermelon and basil from Shea Gallante of Ciano (and garlic/chives fame). Marc Forgione, who cooked at Great Chefs, inspired some serious conversational commotion in front of his table by hitting both corn and lobster with his chile lobster with local corn and lemon verbena.

Local boy Keith Luce represented with North Fork duck wings with sweet chilies, while Guy Reuge of the Mirabelle restaurant in Stony Brook served up a very popular barbecue pulled pork with croquettes and cornichon marmalade. There was tomatoes aplenty, including from resident Greek food culture ambassador Maria Loi, who partnered with the team at Fresno Restaurant in East Hampton and sourced from both Forks to dazzle the crowd with local zucchinis stuffed with meat (lamb, pork and beef), herbs (mint, parsley, and dill from Round Swamp Farm), a feta mousse (Catapano Dairy feta), and drizzled with Elyros extra virgin olive oil. Event goodie bags included Loi’s “Authentic Greek Cookbook,” summer edition. On the way home, we dogeared the prasopita (leek pie) and dakosalata (salad with barley rusks).

And there was plenty of just-caught raw seafood, from the Hawaiian walu ceviche from Jeremy Bearman of Rouge Tomate to yuzu-marinated conch and grilled blue prawn escabeche with mango, pear, apple, mint and sweet chile relish from George Reid of Aleta Restaurant at the Viceroy Hotel, Anguilla, British West Indies. Dave Pasternack of Esca lead the way with jewels of glistening bigeye tuna, striped bass and other crudo de mercato that he splashed with olive oil and salt; for attendees who asked, Pasternack told them exactly who’d caught it, what fishing tackle they’d used and exactly what chunk of ocean they were fishing in.

Such an interest in where the food comes was common throughout the room, and mirrors a shift in the James Beard Foundation’s focus from celebrator of eating experiences to player in food sustainability issues. The marriage isn’t new (Slow Food founder Carlo Petrini has been talking about eco-gastronomy for decades) but James Beard can play a massive role in getting its chef allies and many eater members to think this way.

“Watching the James Beard Foundation engage in the conversation around sustainability is fantastic,” said Liz Neumark of Great Performances, which has catered the event seven times, and whose chef Tim Sullivan served up a bourbon-glazed pork belly with tomato and jalapeno-infused cheese grit cakes and pickled garlic scapes). “A nationally respected organization cannot be relevant unless it is involved in the conversation around what is on our plate on a deeper level than taste alone.” Neumark, a food leader in her own right, noted the Foundation’s upcoming October conference, “Sustainability of the Table: How Media and Money Influence the Way American Eats,” and the series of similar thought-provoking events that the Foundation has used to get chefs, food corporations and others to the discussion table on land preservation, the costs of sustainability and other timely food debates.

(On the matter of sustainability, also in attendance was Matt Weingarten, an avid forager, who is the executive chef at Inside Park at St. Barts and has been spending his time recently working with other Sodexo chefs to spread sustainability standards throughout the company nationwide; he served cold-smoked lamb tongue with pickled cherries.)

Of course, there was a palatable dose of glam with folks posing in front of a chocolate-colored Mercedes Benz. Richard Gere made the rounds, rubbing elbows with Daniel Boulud, dilligently sampling everything (except the meat dishes, “I don’t eat meat,” he would say to the chefs after asking what the dish was.), and not at all phased by the small crowd hovering just behind him most of the night. Wolffer’s garrulous winemaker Roman Roth donned shorts in response to the heat, pointed attendees towards his wines for refreshment, and posed for pictures with JBF leadership and honorees, including Emeril Lagasse, recognized for his leadership in helping to preserve and restore the food, fishing and farming culture of the Gulf. Though his foundation, Lagasse, who owns 12 restaurants and has authored no less than 15 cookbooks, has given millions of dollars to Gulf-related charities in the last few years.

Staffing his restaurant’s table, like all the other chef-owners in attendance, Lagasse was soft-spoken, generous with the autographs, and praising of the local seafood. “We’re kinda spoiled because most of our restaurants use Gulf seafood,” he said as introduction, but noted that he does buy from some northern fishers, including the Atlantic halibut and striped bass he favors when available, as well as some oysters and Peekytoe crab he’s been buying from Maine for years.

And how are the Gulf fisheries doing? “Very well,” said Lagasse, serving up cool, Gulf white shrimp with a traditional remoulade. ” I fish all the time, so I see it.” Pasternack, another chef-fisherman in attendance, apparently invited Lagasse to skip the event and go fishing, but was instead dishing impeccable crudo on the other side of the tent. “Dave,” Lagasse said with a reverent grunt: “He’s my man.”

Next up in the must-attend Long Island events category are the two music-focused happenings in August, with excellent food offerings: Escape to New York and MTK Festival. And don’t forget to buy your tickets (and sign up for the wine salons) for HARVEST EAST END in September.