Rob Stephenson shot gardens and farms with a large-format camera (you know, the kind with the giant hood that goes over the shooter’s head). The result is a gorgeous book featuring urban agriculture in all five boroughs. 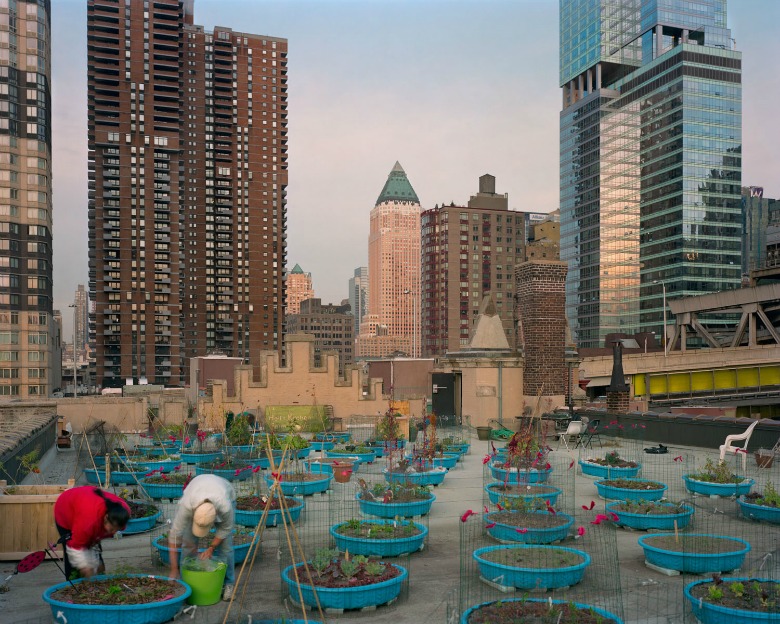 Stephenson says the Hell’s Kitchen Farm Project, where food grows in kiddie pools, is the most visually arresting.

When planning our current issue last winter, we wanted to profile the Urban Battery Farm, but there was just one problem: we needed photos pronto and at that time of year, the only thing to shoot was bare, frozen ground.

Salvation came in the form of a photographer named Rob Stephenson. He had gorgeous summer photos of that farm — and of many others, all thanks to his Photo Urbanism Fellowship with the Design Trust for Public Space. For the project, he’d photographed over a hundred city gardens and farms in 2011 and 2012, all with a large-format camera (you know, the kind with the giant cloth hood that goes over the shooter’s head.) The result is a gorgeous photography book called Roof to Table, featuring 35 urban gardens from all five boros.

Stephenson saw food growing in wildly diverse settings, and says what struck him was the adaptability of agricultural practices to the urban environment. He shot the gamut, from Staten Island fields to Bronx backyards to Riverpark, where an entire farm in hundreds of milk crates overlooks the FDR Drive: 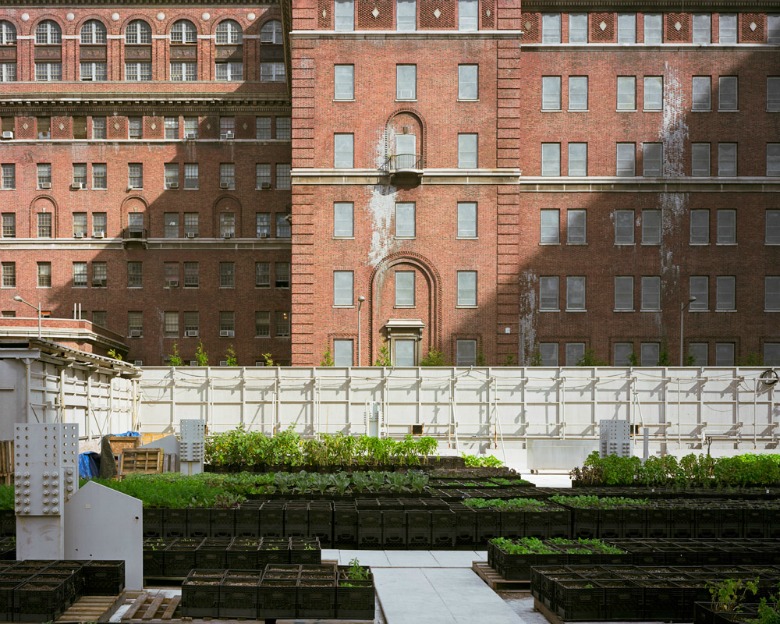 The crops tended in Riverpark’s milk-crate farm are bound for the restaurant’s prized plates.

Stephenson says the Hell’s Kitchen Farm Project (shown at top of this page) whose harvest feeds the hungry, is the most visually arresting. “It’s right next to the Port Authority, which is kind of disgusting and dirty, and then you go up to the top of a church and you have this farm growing entirely in baby pools, with tall buildings surrounding it. It’s beautiful modest rooftop agriculture.”

But he also shot set-ups with impressive infrastructure like the Brooklyn Grange rooftop farm at the Navy Yard — in fact today his studio is one floor below them.

Stephenson credits the local food movement with the wide blossoming of urban agriculture but says in some gardens, the food itself seems secondary. He cites sites like the South Bronx and East New York, where gardens are centers of the community, with peas and peppers served on the side. And in Flushing, Queens, a huge community garden called Kissenna was a cornerstone for the predominantly Korean community, who tended wildly biodiverse crops, many of which Stephenson had never seen before.

Today he’s at work on his next project, appropriately entitled “Beyond the Kale.” I asked whether the work inspired him to start his own garden, but he laughed off the idea: “I have a brown thumb, the best I could do is a pot of basil. I take pictures.”