Wine That’s Off the Record 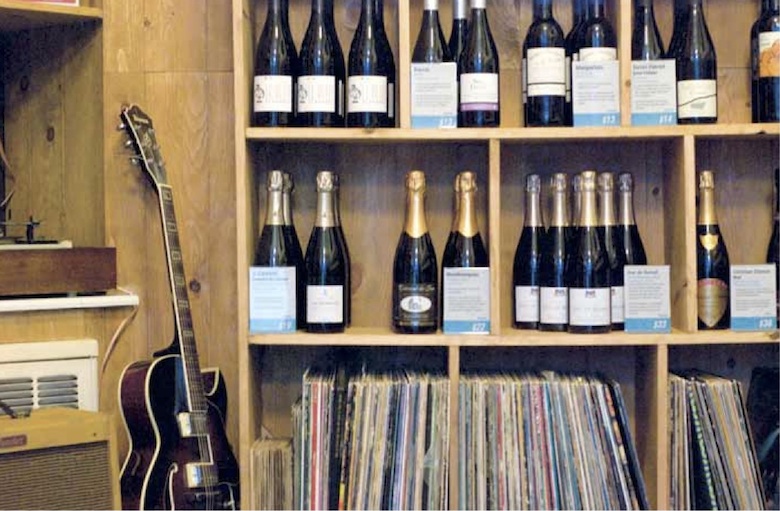 Axl Rose and his glass of wine hold court on one whitewashed brick wall, a record player in the corner plays Sharon Jones then Arcade Fire, the cash register sits on a desk embedded with speaker parts, and behind that desk sits a floppy-haired guy you’d expect to own a record shop. But the wooden bins and plastic crates that line the walls of this narrow store are filled not with records but with organic and natural wines made by small, relatively unknown producers. And, instead of being located on Bleecker or in Brooklyn, the aptly named Vinyl Wine sits between 99th and 100th streets, right on the cusp of East Harlem.

Most days, co-owner Mike Faircloth mans the shop. He can wax poetic about organic growing practices and the methods of small winemakers. He previously studied jazz and worked as a viticulture assistant at Pahlmeyer Vineyards in Napa—a perfect résumé for his new gig. Although he loves it when a customer wants to “get geeky” over wine, and can enthuse about small family vineyards and even specific strains of yeast, Faircloth and his business partner (another Mike, Cesari), both want the shop to have an approachable feel. The prices are affordable—most bottles cost between $10 and $20—and the vibe is casual and unassuming.  They talk about wine “in a non-douchey way,” says Cesari.  Feel free to tell either Mike that you’ve picked a bottle for its label and its screw top, as one recent customer did—no judgment here.

Cesari has called East Harlem home for six years. He used to buy wine downtown, and personally saw the need for a wine store in the neighborhood. He’s got a day job in advertising and brings his business skills to Vinyl’s branding and marketing. The Mikes have tried some grassroots methods to reach new customers, including stapling Vinyl Wine signs to telephone poles, starting a wine blog and a Facebook group and delivering directly to customers and to diners at a BYOB Senegalese restaurant around the corner. You’ll often see one of the Mikes make the deliveries himself.

Vinyl Wine, with its neon-blue circular logo, sits between an empty storefront and a Chinese food takeout place, across the street from the MTA Bus Depot on Lexington Avenue. A placard outside the shop announces the wine of the week, as well as the album of the week; Faircloth says passersby do a double take. Vinyl labels its wines with humorous tasting notes and tips—“Good, but inexpensive pinot is harder to come by than a decent song from Nickelback.” The other shops that sell wine in the neighborhood have illuminated “liquor” signs and hold most of their wine in jugs behind bulletproof glass.

Customers like Kari Rolling and Ma- Nyahn Kromah seem to speak for the neighborhood’s appreciation of the shop. Rolling loves the variety; prior to Vinyl’s arrival last summer she, like Cesari, had to buy wine downtown. Kromah loves the delivery option.

Cesari knows that “wine is one of those things you buy off the subway on the way home,” and the proof is in the profits—sales are mostly single-bottle purchases, and customers often ask for something they can drink that night. Still Cesari and Faircloth hope that some customers aren’t in a rush—they’d like their shop to be a place to hang out. Originally they wanted to sell both music and wine, but New York State liquor laws had other plans, so the vino inventory is extra impressive. Regulars have an “endless supply of new shit to try,” says Faircloth. The 120 or so varieties hail from near and far, including the Finger Lakes—where Cesari is from—and France, and change often.

At a recent tasting, customers line up to try glasses of Monastrell and Mayolet, while a giant speaker acts as a bar. Craig Nelson, who’s lived in East Harlem for a few years, praises the shop. “There’s so little here that (the shop) was a welcome addition,” says Nelson. But he cautions the Vinyl team to be patient as both the nabe and the shop grow and change.

As the tasting progresses, friends join regulars, the party-like atmosphere brings in curious onlookers from the rainy night and the little shop fills up. “In a normal tasting people would drink, buy and leave,” Faircloth says, looking around. But Vinyl Wine is a place to hang out.