During World War II, thousands of green-thumbed Gothamites grew produce to offset food being shipped overseas to our soldiers. 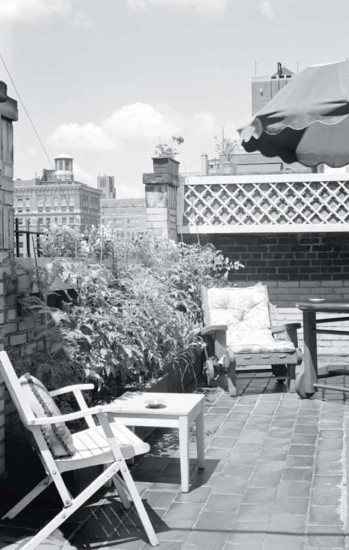 Those tiny tomatoes growing on your fire escape might be a political statement, a personal challenge to the global industrial food system. But there was a time when growing food in New York City was more than mere personal politics—it was a point of national pride. During World War II, thousands of green-thumbed Gothamites grew produce to offset food being shipped overseas to our soldiers.

Throughout those war years, our country’s food production and distribution networks were focused on feeding the 16 million servicemen and women stationed abroad, so citizens were urged to plant socalled Victory Gardens to prevent shortages on the home front. “Food will win the war!” became the motto of wartime gardeners, and between 1942 and 1944, a whopping 20 million Victory Gardens took root on both public and private spaces, supplying nearly half the produce Americans ate.

Here in Manhattan, a municipal call to action in 1943 was answered with an enthusiastic display of patriotic plantings: cabbage and corn in the plaza of Rockefeller Center, a demonstration garden on the grounds of the ritzy Schwab Mansion. Even those without plots pitched in—this photo shows the penthouse of 70 East 70th Street, where residents used their Uptown terrace to grow tomatoes.

At the peak of the effort, there were more than 400,000 Victory Gardens in the city cultivating more than 200 million pounds of produce on more than 6,000 acres—the equivalent of seven Central Parks! Tomatoes were a favorite, followed by beans, beets, carrots, lettuce and chard. But these skyscraper harvests all but ended with the war. In New York City, post-war “Freedom Gardens” were a short-lived and unsuccessful attempt to keep things growing: By the late 1940s they were, like so many summer tomatoes, nothing but a memory.

Photograph courtesy of the Museum of the City of New York