East End Dispatch: What to Eat at South Edison 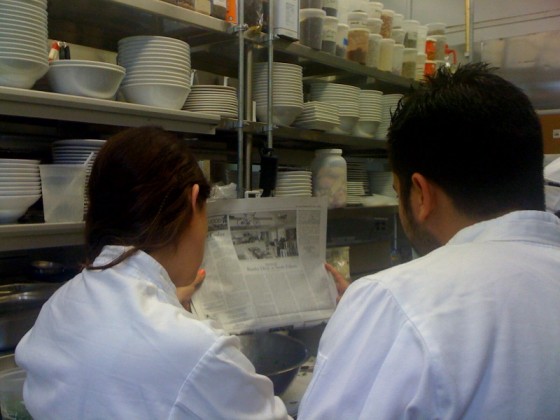 The South Edison Kitchen gathers to read the good news in the East Hampton Star.

MONTAUK–We occasionally make the trip out to the South Fork of Long Island to visit our friends at Edible East End, especially when it involves supper. In this case they recommended we stop in to say hello to Todd Mitgang, the chef at South Edison, a year-old,  lobster-red and turquoise hangout half a block from the beach and two blocks from Montauk’s main square. (Go on Thursdays, as we did, and you can hit the tiny morning farmer’s market, which features both locally procured salt and locally grown wheat flour, as well as bread leavened by naturally occurring yeasts. You’ll probably be shopping alongside Roy, the sous chef from South Edison.)

Mitgang’s skills with fresh fish we knew well back from his days at Crave Ceviche Bar in East Midtown– in winters, he lives in Williamsburg–so we weren’t surprised at all by the excellent octopus tacos (the flesh first slow-cooked in olive oil for hours before a quick sear on the plancha); fresh Balsam Farm lettuces grown just east in Amagansett dressed with house-smoked local bluefish dressing; the slab of fried local hake served with house-smoked potatoes, a griddled Meyer lemon and a vinegar spiked with malty Sixpoint stout; or the ruddy red bowl of tomato chowder studded with fat cherrystone clams and bacon. (They smoke their own in house, by the way.)

What we didn’t expect was one of the best Southern style suppers we’d had in some time, no easy task in an era where comfort food reigns supreme across city menus. Mitgang told us his “crispy vinegar braised chicken leg” was his sleeper hit, and in our opinion he’s right, but only if the side of cheese grits it takes the staff three hours to make is off the table.

Mitgang only serves the flavorful legs of a free-range bird, slow cooking them in advance, storing them in their own fat and then breading and dunking them in the fryer. It’s served with creamy escarole, with a wonderful barely bitter bite and a sweet tomato-pepper jam. And if you’re smart, a side of those super-creamy Anson Mills grits topped with aged cheddar, chives and more of that South Edison bacon.

Funnily enough, the day we visited was the day the first review of the restaurant appeared in a local paper, a pretty darn positive piece by Laura Donnelly in the East Hampton Star. The chicken, it seems, was maybe the only thing she didn’t eat. If the rest of you are distracted by the lobster roll with with black garlic aioli and the local fluke sashimi served with chili jam (Mitgang cheffed at Kittichai, after all) and East End turnips so sweet Donnelly thought they might be beets, all the better. More fried chicken and grits for us.