How the well-heeled men behind Manolo Blahnik stepped boldly into the cow field. 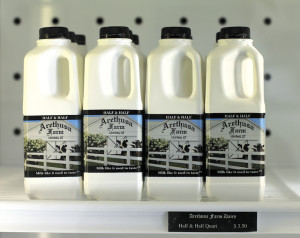 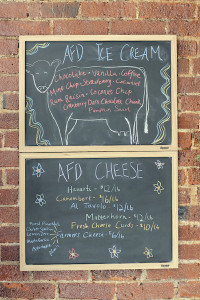 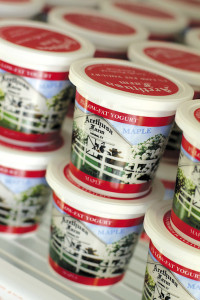 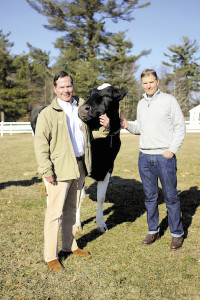 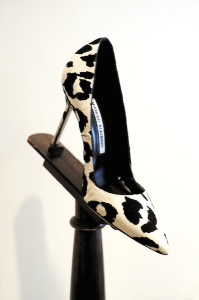 What does a world-famous shoe store on 54th Street have in common with a milking barn on Route 63 in Litchfield, Connecticut? More than a few things, as it turns out. Top of the list: the attentions of George Malkemus and Tony Yurgaitis—co-owners of both businesses.

George and Tony are synonymous with one of fashion’s most recognized brands: Manolo Blahnik. For more than 30 years, Mr. Blahnik’s (yes, there is an actual Manolo Blahnik) company has been run by George (as president) and Tony (as vice president). These two have made a career of convincing the fashionistas of the world that a closetful of $800 shoes are as mandatory as a MetroCard. But since 1998, when Sex and the City’s Carrie Bradshaw was teaching HBO viewers how to pronounce “Blahnik,” George and Tony have been developing a separate business at their country house—one that’s all about work boots instead of strappy stilettos.

Arethusa Farm (named for an extinct orchid) was founded over a hundred years ago, and its original owners sold milk on the honor system at a roadside stand. Eventually Arethusa became a horse farm under a different name and, since buying a house across the street in 1988, George and Tony enjoyed looking out at its rolling pastures and woodlands. When the farm went up for sale in the mid ’90s and narrowly escaped golf course fate, they decided there was only one way to ensure that it remains pastoral: to buy it themselves.

As meticulous in agriculture as they are in couture, they enlisted consultants to determine the ideal use of their new 325 acres. With the decision to bring the farm back to its dairy roots (and original name) came the goal to build a herd of superior bovines and a mission to produce “milk like it used to taste”—now Arethusa Farm’s motto.

The entryway to the milking barn is also known as the gallery and trophy room. That’s because the farm isn’t just making milk, it’s also making champions. Arethusa shows its award-winning cattle at major dairy competitions all over the United States and Canada, including the World Dairy Expo in America’s dairy headquarters: Madison, Wisconsin. In addition to ribbons and trophies crowding the shelves like models waiting backstage at a Marc Jacobs runway show, the walls are lined with glamour shots of some of their winning-ist cows happily grazing in front of classic cars, manicured lawns and poolside. The doors to the barn open on more than 80 beautiful Holsteins and Jerseys enjoying their midday meal. A sign above reads, “Every cow in this barn is a lady, please treat her as such.”

Including those 80 milking cows, Arethusa is home to 350 head of dairy cattle—a mélange of calves, heifers (the “teenagers” of the dairy world), those lovely ladies in the milking barn and a bull or two.

At first blush, George and Tony are most definitely city boys. Accompanied by their faithful Scottish terriers, Alfie and Gracie, they’re the picture of Manhattanites who weekend in Connecticut. But as George warmly greeted Vivid, a Jersey cow sticking her muzzle out as he passed, I turned to see Tony, rake in hand, mucking manure with the ease of a man who does it often. The two are at the farm every Thursday through Sunday, without fail, with their non-farming days spent running Manolo Blahnik in Midtown—a heck of an off-farm job.

And unlike gentlemen farmers who leave the actual agriculture to hired hands, George and Tony know each cow in the barn by name and lineage. Tony walked me through the stats of not only the cow chewing her cud before me, but also her mother, her father and her grandmother. The dream is to build their own bloodline—something that takes decades of careful breeding. All that meticulousness is really beginning to pay off: Of the 350 cattle at the farm, 200 were born and bred at Arethusa.

The breeding is mostly done by artificial insemination, but Tony explains that cows who don’t conceive via bottled semen get the complete service from Valentino, the resident bull.

“Valentino,” George adds with a laugh, “our little tribute to the fashion world.”

In addition to building a premier herd, George and Tony are passionate about grooming the next generation of America’s dairy farmers. “Farming is dying,” George says. “Connecticut used to have 3,000 dairy farms, and now we’re one of 120 that are left.” Looking around at the staff, some of whom are mucking out the barn alongside Tony, or gently brushing the hindquarters of enormous Holsteins, two things stick out: They’re all young, and nearly all sport Wisconsin sweatshirts.

How did these (mostly) Midwestern dairymen and women find their way to a picturesque Connecticut farm run by two fashion executives? It wasn’t through the shoes. Every one of them learned of Arethusa through its success on the dairy show circuit and its much-lauded reputation for quality breeding. What keeps them here is, according to staffer Katie Kearns, “Good people and good cattle.”

The Manolo Blahnik staff have a great love for their sister company out in the country. Last summer, the fashionable city kids came out to the farm and hosted a Manolo sample sale under a tent in front of the barn—the proceeds of which went to a scholarship fund for Cornell agriculture students. The height of fashion supporting the next generation of farmers—George and Tony make it look like the most natural pairing in the world.

But it’s not all fund-raisers and expos. If there’s one thing these two are known for, in city and country, it’s successfully moving rarified product. They’ve applied their shoe-salesman acumen to milk, ice cream, yogurt and cheese in the Arethusa Farm Dairy storefront a few miles away in the sleepy hamlet of Bantam, Connecticut.

The shop, housed in Bantam’s old firehouse, is far from fussy but made up of clean lines and simple styling—a little bit of New York City come to New England. The back wall is a wide window looking in on the dairy plant. Customers can watch milk as it’s separated into cream, and yogurt as it’s incubated with live cultures (and nothing else), while they order an ice cream cone or stock up on Arethusa’s own farmstead cheeses. In addition to the farm’s delicious dairy products, the store also sells copies of Manolo Blahnik’s memoir, The Elves and the Shoemaker, as well as a carefully curated selection of foods from the Puglia region of Italy. George and Tony fell in love with Puglia on a visit there last summer. “It spoke to me,” says Tony. “People live off the land there.” So they decided to stock Pugliese foods in the store alongside their own, making it possible to do much of your fine food shopping in one place.

The refrigerator case is chock-full of Arethusa Farm’s milk that honors its tagline. But is it raw? Organic? Left on your doorstep by the milkman? None of the above. The key to Arethusa Farm’s milk is vat pasteurization. By heating it to 145 degrees and holding it there for 30 minutes, beneficial bacteria are not killed off like they are in more conventional, higher-heat pasteurization scenarios. The resulting flavor is different than regular store-bought milk: It’s richer, more complex. Its shelf life is also far shorter than the supermarket stuff—five or six days versus five or six weeks. But customers clamor for it. One regular is a mother from Manhattan whose sons refuse to drink any other milk. She stocks up on Sundays before heading back to the city.

While I was sampling the cheeses made upstairs (Arethusa milk becomes everything from farmers cheese and Camembert to Havarti and Swiss) and eyeing the menu of homemade ice creams, Tony gushed about their head cheesemaker, Chris Casiello: “He’s more mechanical than me, he’s a chemist.” The Camembert is a particular triumph—refined, mild, ready to complement almost anything you serve it with.

By the time I was greedily consuming spoonfuls of rum raisin ice cream, George and Tony had me convinced: Making waffle cones at the shop or hopping into a pen with a heifer (just to say hello) comes as naturally to them as chatting up André Leon Talley at Fashion Week. That said, in toggling back and forth between such disparate settings, the partners of 34 years have figured out who is most suited to each. Says Tony, “I think I shine more in this world. George shines much more in the shoe world.”

Running a dairy farm that’s viewed as tops by some of America’s best-known cattlemen, and a product line that’s beloved by all who taste from it, would be more than enough for your average businessmen, but, as you’ve probably figured out by now, George and Tony are nothing if not ambitious.

And they’re well on their way to developing the next phase of Arethusa’s gastronomic empire. The old firehouse storefront is connected to an identical building next door by a postcard-perfect brick courtyard, complete with a fountain and mural of a bucolic herd of bovines grazing away. By late spring or summer, it will be a bustling wine bar serving small plates of locally sourced deliciousness showcasing the bounty made possible by thousands of pairs of beautiful shoes.