In recognition of National Honey Month, New York’s Waldorf Astoria was recently abuzz with the Battle of the Bees: a head-to-head taste test between the sweet products of resident hives from both Waldorf Astoria New York and Grand Wailea: A Waldorf Astoria Resort in Hawaii. On September 4, the two properties met on the 20th floor rooftop garden and apiary space to share honey-inspired menus and judge which hotel’s honey reigns supreme.

While the lighthearted competition eventually ended with both properties walking away with at least one accolade apiece, the larger goal of the evening was also to draw attention to the properties’ concern for “the plight of the honeybee population.” We chatted with chef David Garcelon (whose honey was the judges’ pick) of Waldorf Astoria New York to learn more about both the “battle” and the hotel’s rooftop apiary. 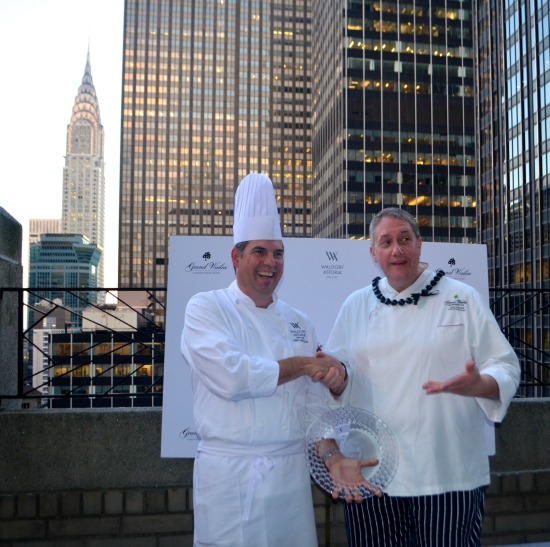 Edible Manhattan: What motivated you to install hives smack dab on the roof of the Waldorf Astoria?
David Garcelon: I had installed hives on the property of my previous job after having noticed that insects (like ladybugs, beetles, and butterflies) can find their way to surprising places, including like the roof of a skyscraper. I was amazed! Because of this, I had some experience with hives when I came to the Waldorf Astoria and knew that we could use them to make the most of our rooftop garden. It’s a way for us to get great honey.

EM: Are you the resident beekeeper as well?
DG: Beekeeper Andrew Cote looks after our hives since I think it’s very important to have a professional beekeeper involved. He also sells honey at Greenmarkets around the city.

EM: How do you use honey in the kitchen?
DG: I’m a huge fan of honey as an ingredient. I find it more versatile and interesting than traditional sugar and have used it in salad dressings, ice cream, wild mushroom chowders, fried chicken and other dishes in the past.

EM: How many hives do you have in the property’s apiary?
DG: We have six hives that produced about 300 lbs. of honey during last year’s harvest.

EM: When put side-by-side, how did this honey differ from Grand Wailea’s?
DG: The difference was like night and day. Our honey is very light in color with complex floral and herbal tastes. Because of the difference in the Hawaiian bees’ diets, their honey was very dark with a rich, caramel-like flavor. They were very different products!

EM: Where can interested folks buy your honey?
DG: Currently, our honey is not for sale. In addition to making appearances on our menus, it’s offered to special guests and visitors who take our historical tour.