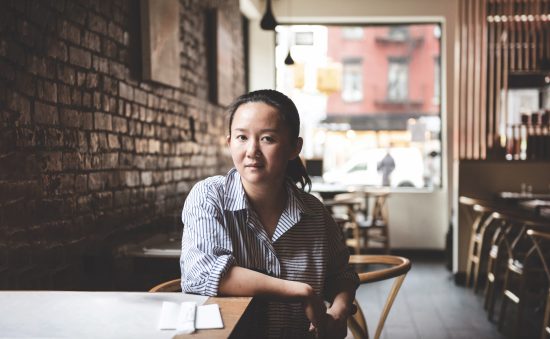 Crucible.
Simone Tong had a remarkably bad pandemic, but that didn’t stop her from opening Silver Apricot right before she gave birth.

In the space of six months in 2020, Simone Tong closed her three beloved Little Tong restaurants and opened her successful—and that’s pandemic successful—Silver Apricot restaurant. Meanwhile, she had a baby; 2020 was a big year for Tong.

It was also brutal. Her East Village Little Tong was a tiny space that could never profit while enforcing social distancing, nor was its miniscule kitchen large enough to turn out a life-saving volume of takeout. Meanwhile, her chefs and staff were walking up to two hours back and forth to work rather than risk trains, cabs, or Ubers. First, the East Village branch fell, then her Midtown Little Tong fell when WFH policies removed daily 9-to-5ers. Finally, the newest Little Tong (which debuted in December 2019 in the Deco Food + Drink food hall—a location that pulled from Madison Square Garden, the Theater District and Penn Station) closed when the sports fans, theatergoers, and commuters all stayed home.

In July 2020, Tong debuted Silver Apricot on Cornelia Street. Yes, there was a pandemic and she was eight months pregnant, but she figured that it would be better to open before, rather than after, the birth.

“My general manager and my partner were, like, ‘You gotta stop coming to the restaurant,’” she recalls. “Two days after they made me agree to stop coming in, my water broke, so I went the hospital and gave birth.” She continues, “And I was looking at my baby in the NICU and ordering fish. My partner’s, like, ‘Could you just stop it? What are you doing?’ And I’m going, ‘Yeah, you’re right. You’re right. I need to focus on the baby.’” 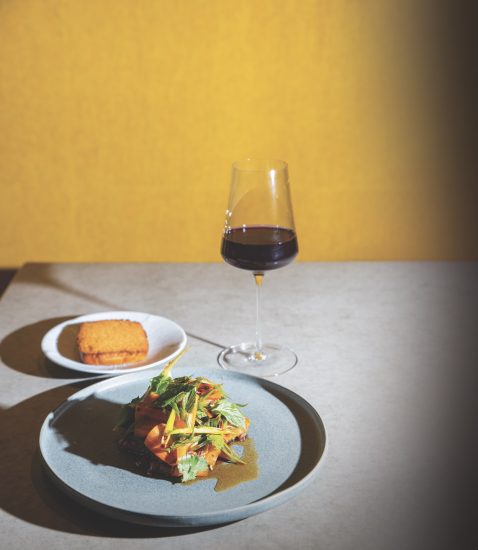 Fusion of a Fusion. Tong, born in Chengdu, Sichuan and well-traveled throughout Yunnan, serves a fusion version of Chinese-American cuisine at Silver Apricot.

Now she laughs at her idea to serve a $75 seven-course, takeout tasting menu at Silver Apricot: “It is kind of ridiculous because when it comes to a tasting menu, and in a takeout form, everything looks so tiny.” Then there was the two-month midwinter closure when they couldn’t serve shivering guests outside on 20° nights. And her prices— owing to her ingredients, style of service, and West Village real estate—were higher than at other Chinese restaurants.

The team tweaked Silver Apricot’s concept, style, and menu (twice) to adapt. Now, Tong calls it “New Chinese- American”—a fusion take on an existing fusion cuisine (specifically, American-Chinese takeout). One dish fully expresses the idea: a scallion pancake, only made with butter-laminated puff pastry and scallion butter. “You get all the flavors of a Chinese scallion pancake, just in a different form.” (Plus, she admits, she’s “a big fan of butter.”) Silver Apricot now operates close to its 51-seat capacity, which includes indoor, street, and garden tables. Recently, Ruth Reichl visited and raved.

Tong is clearly back on her feet. But her path to becoming a celebrated chef—the details of which she shares with f-bomb-embellished enthusiasm—is so full of plot twists that it almost sounds unreal.

Tong was born in Chengdu, Sichuan, but her parents, seeking better opportunities, soon moved the family to Macau. Tong bounced around schools, never staying long enough to make friends. When she was 11, the government of Singapore invited her parents, who organized art exhibitions and auctions, to move to the tiny Southeast Asian nation, then considered an art desert. There, Tong perfected her English, and, at yet another school in Australia, aspired to become a surgeon, architect, or scientist. “Whatever was the most challenging, I wanted to do,”she says.

Tong loved to eat and had always taken good food for granted: the famed hot pots of her native Sichuan, the Portuguese-African-Chinese fusion of Macau, the farm- to-table cafés of Australia. But that came to a halt when she enrolled at the University of North Carolina at Chapel Hill. “The food tasted so bad, I immediately lost 10 pounds,” she says. As she integrated donuts, frappuccinos, and cloying American- Chinese food into her diet, she gained 20 pounds. Out of necessity, she began learning her way around the kitchen.

“I started to cook for everyone in my dorm, stir-frying shit, making noodles with my own sauces and pickles—everyone loved it,” Tong says. “I realized the joy of feeding people.”

After graduating, she moved back to Chengdu and opened an English-language school, which she eventually got bored with and sold. She got a job with Louis Vuitton and began putting her psychology and economics double-major to use in a side hustle, playing online poker. She excelled at this and, on trips to Las Vegas, she took dining breaks at Nobu and Jean-Georges between games.

Her eureka moment struck in the form of the TV show “After Hours with Daniel Boulud.” Inspired by the camaraderie and cooking she saw on it, she decided to become a chef. Her parents were not enthusiastic. “‘You’re crazy: You’re a girl, you’re Asian, and we don’t have three generations of chefs in our family!’” she recalls them scolding. “‘We’re not financing you.’”

Undeterred, Tong sent cover letters to 50 restaurants across Asia and Europe. She heard from only one, in Singapore, and so she moved there to work and attend culinary school. At the end of her program, she landed a dream internship at chef Wiley Dufresne’s molecular gastronomy restaurant Wd~50. For four years, she worked so hard she barely saw daylight, and then she followed Dufresne to Alder. Meanwhile, she fell in love with New York City, “the only place that I don’t feel like a foreigner, that I feel I belong.”

Still, “no matter how good Japanese, French, or Italian cuisine is,” she says, “it’s still not my cuisine.” She decided to serve Chinese cuisine, but first, she traveled to Yunnan Province to find inspiration. She spent time with a few of the region’s 26 ethnic groups, sampling edible flowers, insects, moss, lake weed, and home-brewed wine. She helped locals make cheese from fresh cow milk and, after drying it in the sun, ate it with homemade rose jam; she joined lifelong foragers as they collected bushels of Yunnan’s 300-plus types of edible mushrooms. She ate mixian, the noodles that became the heart of Little Tong.

Having pulled through the worst of the shutdown, what’s Tong looking forward to now? Now crucible-proven, her thoughts turn to operations.

“I want to make sure that Silver Apricot is working in a way where I don’t have to be the line cook or the prep cook. Or my general manager doesn’t have to be the one that is doing all the physical work.” Look for Little Tong 2.0 in 2022.