From Farm to Food Pantry

For New Yorkers in need, the Greenmarket is a friend indeed. 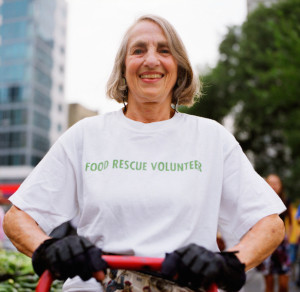 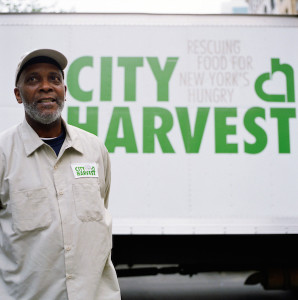 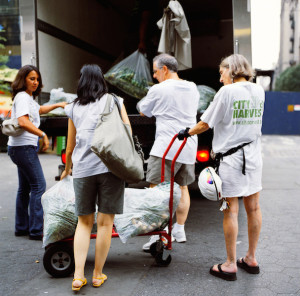 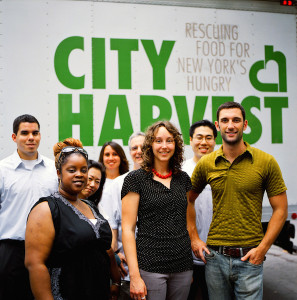 If you’ve ever been by Union Square Greenmarket at the end of the day, you might’ve noticed scores of enormous plastic bags piled on the pavement, each filled with the remains of the day: still-lovely heads of buttercrunch lettuce and hundreds of French breakfast radishes, say, or maybe bushels of sweet corn, your weight in Kirby cucumbers, or heirloom tomatoes worth a small fortune. This prized produce might look like it’s bound for tony restaurants, but the green logo on the clear bags belies another fate: These ingredients are destined for City Harvest trucks, and will soon be on offer at soup kitchens, food pantries, shelters and senior centers citywide.

People often picture “emergency food”—the politically correct term for goods given to those in need—as canned peaches or ham salad past its “sell-by” date. But City Harvest, the world’s first “food rescue” organization, is supplying New York City food pantries with the same stuff that scored top dollar from top chefs mere hours before. With help from GrowNYC, Greenmarket’s parent organization, City Harvest “rescues” unsold produce—be it cilantro, pole beans, eggplant, cantaloupe, white peaches, summer squash or purple basil—to feed families, not the compost pile. Farmers are happy to oblige; if you have 10 cases of turnips left over at the end of what’s already an 18-hour day, the last thing you want to do is load ’em back on the truck. Sure, things that can be sold days later head back over the bridges and tunnels—hardier goods like apples, potatoes, onions, garlic, maybe leeks, not to mention honey or frozen lamb chops—and really wilted wares do get tossed. But by day’s end, just about everything else that wasn’t toted away by a shopper goes straight into those big bags, free of charge.

Last year, volunteers and staffers collected a staggering 700,000 pounds of produce from city Greenmarkets. At Union Square Greenmarket alone, volunteers help load truckloads of unsold fruits and vegetables four days a week, all year long, and high summer offers peak hauls. Of course, Greenmarket is just one of City Harvest’s sources, which also include everything from retailers to restaurants. In total, the not-for-profit distributes around 100,000 pounds of food each day, either as hot meals at soup kitchens or as groceries at food pantries, says Matthew Reich, City Harvest’s vice president of food sourcing and information systems.

Sure, there are occasional sweets, but City Harvest trades almost exclusively in so-called nutrient-dense foods like fresh produce or edibles with no refined sugars or starches. And unlike supermarket seconds, where veggies might get gifted once their stems start to turn brown or their edges wilt, Greenmarket donations are typically pristine.

But hunger is on the rise, unfortunately. Though City Harvest and the Food Bank for New York City are working to make a dent, their combined efforts are still about 150 to 200 million pounds a year short of filling all of the city’s empty stomachs. In the past couple of years, City Harvest has seen a 25 percent increase in the number of visitors at the agencies it supplies food to. It’s not just the homeless in need of fresh produce and food, either. It’s the city’s working poor as well.

“If you’re making $8 an hour in New York City and trying to support a family, you get benefits like food stamps, but it’s not really enough,” Reich says. “We’re trying to make healthy foods available in high-poverty neighborhoods, to give people the opportunity to make a choice.”

A focus on whole foods is appropriate, by the way: City Harvest got its start in the 1980s, when founder Helen verDuin Palit—then running a soup kitchen at Yale—sat down to a meal of potato skins. She wondered what happened to the rest of the tuber, and by the next day had scored a donation of 30 gallons of spud centers for the hungry; her idea grew into an organization that was rechristened City Harvest when she moved to the Big Apple.

Today the donations—whether Idaho trimmings or heirloom fingerlings—now go to 114 different programs, like the Yorkville Common Pantry in East Harlem, which added fresh options to the canned standbys a little more than two years ago. As the city’s largest community-based food pantry, Yorkville feeds 25,000 people a week. After a recent poll in which 90 percent of clients said they had incorporated the fresh pantry options into their diets, City Harvest began doubling its veggie deliveries to around 400 cases a week. What’s inside varies by season—corn and cukes in July, say, or plums and peppers in August—but no matter: “Most everything City Harvest has to offer,” says Daniel Reyes, Yorkville’s director of programs and operations, “we’re more than willing to accept.”

Yorkville typically incorporates Greenmarket ingredients into the three square meals the soup kitchen serves every day—in summers, diners can include school kids on vacation, too—and often includes recipes in their pantry baskets. “There’s no point in giving out a beet,” says Reyes, “if people don’t know what to do with it.”

Some of those roots, in fact, are donated directly from local farms, and skip the Greenmarket trip altogether. City Harvest works with local growers up and down the East Coast to collect unsold surplus; in 2012, about 3.2 million of City Harvest’s approximately 33 million pounds of rescued food will originate from local farm fields. Recently, Reich inspected one farmer’s glut of kale and sweet potatoes. “It was perfect,” he says. “I’d buy that kale at Whole Foods.”

Sometimes City Harvest will pay a farmer for their overhead—something like 4 cents a pound to get crop out of the ground and pack it into boxes—but most collections are strictly donations. Says Reich, quite simply, “It kills them to throw that stuff away.” People in this industry aren’t farming to get rich, he adds, they’re doing it because they love feeding people.

Ken Migliorelli, of Greenmarket’s beloved Migliorelli Farm up in in Tivoli, for example, has been donating heaping helpings of his 180 different fruits and vegetables to City Harvest for “however long they’ve been in existence.” The day’s volunteers often hit the mother lode when they arrive at his Union Square stand in late afternoon, to pick up everything from broccoli rabe and Romano beans to Chioggia beets and rainbow chard: “We usually give them whatever’s left over on the table,” says Migliorelli.

The farmer knows his donations are tax deductible, but he seldom bothers filing them: “Mainly,” he says, “I know it’s going to a good cause.”