NYC’s only culinary high school is hosting its annual fund-raising benefit, which will be hosted by Food Network stars like Bobby Flay and Sunny Anderson. 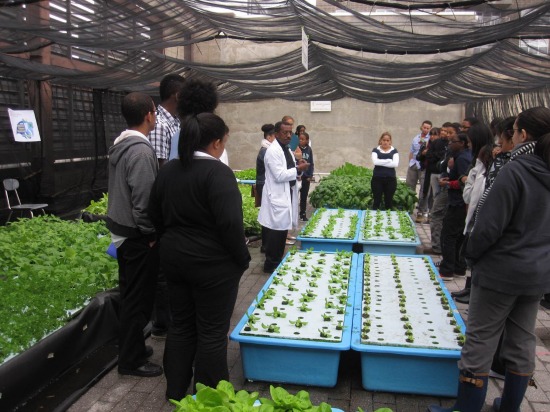 Students in the hydroponics lab at the Food & Finance High School. Photo courtesy of Nan Shipley.

It’s Nan Shipley’s goal in life to “make sure everyone knows that the school is here” — the Food & Finance High School, that is. Shipley, who is the chair of the Food Education Fund Board of Directors, the 501(c)(3) charity that supports the high school. To get the word out to as many as possible, and to keep the school in butter and sugar, so to speak, the school is hosting its annual Small Plates, Big Hearts benefit in partnership with the Food Network.

The benefit is “the one large fund-raiser of the year,” said Shipley. “Things like butter, sugar, eggs are expensive.” And to keep the school in butter and sugar, they are largely reliant on donations from investors, businesses like Balfour and Murray’s Chicken that donate product for the school’s kitchens, and large benefactors like the Food Network. But beyond raising awareness for the school and maintaining its operations, “We’re looking to raise money for scholarships,” Shipley said.

The scholarships will help fund the college careers of members of the school’s graduating class. The majority of the students at the Food & Finance High School — an impressive 86 percent — will graduate, of those students, 90% will go on to attend college. It’s a pretty stark comparison to the average retention rate of New York City public schools, which was 60.4% in 2013. And most of the Food & Finance High School’s seniors, in addition to completing their academic and culinary courses, will have a 250-hour paid internship in a New York City kitchen with pastry chefs or line chefs at restaurants like the Modern, Riverpark, ABC Kitchen, and A Voce. One current senior, said Shipley, is currently interning with the pastry chef at Maialino. “The school has successfully has engaged kids who have not been interested by or have been neglected by traditional school programs,” said Shipley.

And it’s no wonder the students are so excited about school: Founded in 2004 as part of Bloomberg’s initiative to create smaller schools, the school offers its 460 students the opportunity to have classes on geometry and American history the same day they learn to julienne or make pastry dough. Graduates receive their high school diploma alongside a considerable skill set and a handful of culinary certifications.

The students learn to cook; they learn to bake. They learn about where their food is coming from, thanks to an enormous, in-house tank of live tilapia that they use for both the curriculum and the student catering program; as well as from the school’s hydroponics lab, which is part of a partnership with Cornell University Extension. The students work with a Cornell scientist to learn about growing food — and together, they grow much of the produce (like basil and lettuce) that they use in the school’s kitchens.

Following a donation from Rob and Genevieve Lynch, the owners of Mulberry and Vine in Tribeca, the school will be able to build a 4,000-square-foot rooftop hydroponics greenhouse. It’s a fitting cause for a restaurant with the mantra, “Eat Local, Cook Global.” The greenhouse will allow students to grow even more of the fresh food that they are learning to work with, and, said Shipley, give them the potential to sell their produce to nearby restaurants. Talk about “local food”: “We’re…teaching [the students] to cook and to use it in ways they hadn’t thought of before,” Shipley said.

You can read more about Food & Finance High School in our May-June 2013 issue.