A Wall Street lawyer forsakes finance and finds that treasure really does grow on trees. 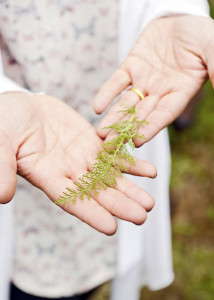 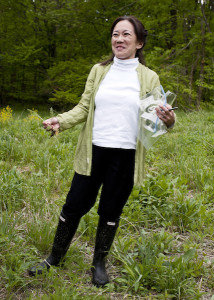 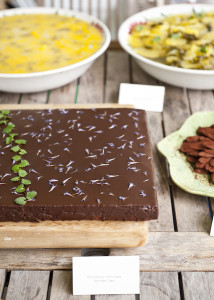 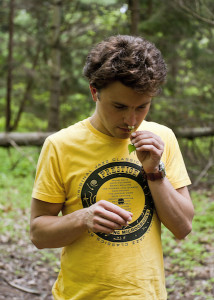 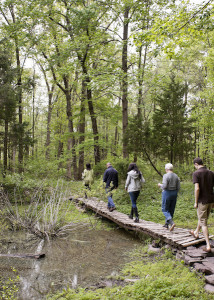 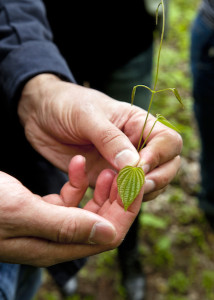 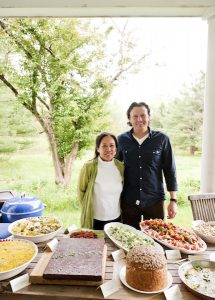 On a recent Sunday afternoon, the crew at Restaurant Daniel—cooks, sommeliers, managers and servers—took leave of their sparkling kitchen and lavish dining room for a picnic an hour west of the city and a world away, in the fairy-tale meadows and brooks of rural New Jersey.

The spread—nearly overflowing two large picnic tables—was befitting of the three-star Michelin powerhouse: complex terrines, lush pâtés, Gorgonzola frittata, Guanaja chocolate and a chilled mango soup. What was not as readily apparent, however, was that each of the dishes was designed around a single category of ingredient: weeds.

Wong was introduced to Jersey weeds early on—her mother often sent her out to pick mulberries, dandelions and blackberries around their Garden State home. (Years later, while cleaning out her mother’s things, she would find that her mother owned the very same wild edible plant books as Wong does today—in early hardcover editions.)

When Wong worked in Japan in the 1980s, and later in Hong Kong, she sampled dishes from all over Asia, where wild-gathered ingredients are widely beloved.

But for Wong, foraging remained just a hobby until June 2009, when, on a whim, she brought a few dewy sprigs of anise hyssop with her to dinner at Restaurant Daniel, which she was visiting only for the second time. She’d never before met Leroux, but when he received the fragrant fronds he took to them like Picasso to a new paint color and peppered her tasting menu with several gastronomical creations, like melon and shrimp with anise hyssop vinaigrette dressing, and capped the meal with an anise hyssop–yuza sorbet. At the end of the night, he said he’d gladly welcome “Mrs. Wong’s” foraged finds in the future. “Bring me everything!” he said.

She started small, delivering occasional fresh cuttings of sumac and pawpaw en route to the office. But both parties were so enthusiastic, she soon found herself dragging bulging plastic garbage bags of stinging nettles or wild rose thorns, which she quips do not pair well with panty hose, on her way from the PATH train, earning dubious looks from the rest of the suited set. Over time, the weed project grew like, well, weeds, and in spring 2011 she quit her day job. She returns to corporate life as a consultant in the dead of winter, and spring through fall focuses on a different kind of green.

Three years and countless weed-filled trash bags since that first hyssop hookup, Wong is Restaurant Daniel’s official forager. A delivery truck makes runs from her rustic outpost to the Daniel kitchen, but for special deliveries, Wong still brings the goods to town in person and works with Leroux on the latest sprouts or shoots.

Today, sprite-like in her green linen and knee-high Wellies, she’s giddy to guide these whiplashed city transplants into the forest to eat.

“These are lamb’s-quarters, they grow all summer,” she says in the grassy tangle behind her house, fingering the fuzzy points of a plant that, once you become culinarily acquainted with, you’ll spot on city sidewalks everywhere. “And these are yellow wood sorrel, you can just pick them and eat them,” she says, popping a couple clover-like leaves and delicate yellow blossoms into her mouth. At first the urban crowd gingerly nibbles on the earthy offerings, but as wine and sun emboldens their spirits, sommeliers pair chardonnay with chickweed buds and managers gather bunches of Easter-egg-purple dame’s rocket for bouquets or salads. “It’s still living if you eat it within an hour of picking,” Wong says with a smile. “This is not from Provence,” cracks one of the Francophile chefs, taking a deep, meditative whiff of the living leaf before tasting.

While the staff is eating the landscape, chef Leroux is busy prepping lunch in Wong’s kitchen. “As a chef, I’m always looking for pristine products,” he says of his fascination. “These have no pesticides, no human touch,” he says, gesturing to a pile of freshly plucked greens. “It’s a unique thing for a chef.”

Restaurant Daniel has always cooked with the seasons, setting its menu according to the arrival of shelling peas or white truffles rather than months on a calendar. But Wong’s involvement redefines ephemeral nature, pushing the kitchen to craft recipes around finicky, fleeting ingredients. This could be a window of two weeks, or even two days. “The key is to get it at its peak,” Wong says, plucking off some bushy, chartreuse Norway spruce tips (we’re in the forest now, surrounded by tracks from deer who also appreciate the succulent spruce) to adorn two of today’s dishes. “You can miss it by only a week,” she warns.

At the nearby Wickecheoke Creek nature preserve, where Wong is a steward and promises we can forage without getting arrested, the crew stuff Ziploc bags full of garlic mustard to infuse into a perfumed oil, or artemisia (also known as mugwort or wormwood) to blend into a creamy, mushroomy soup that later fills a kitchen with the scents of the meadow.

Artemisia is often used in herbal baths or dishes in Asia (or can be purchased as $12 incense sticks at Whole Foods). At the preserve, we’re surrounded by fields and fields of the stuff. Called yomogi in Japan, artemisia is beloved in many parts of the world but regarded as an unwelcome invasive here, says Wong. She gleans information from books that she had her relatives in Japan and friends in Europe send her a few years back. To bolster her knowledge, she also tagged along on wildflower and conservation field tours, always the one with a hand raised to ask questions and quick to jot down notes in her dog-eared field guides.

But it’s one thing to know what’s edible and another to know how to prepare it. If there’s one thing she cannot stand, it’s the old “tastes good in tea” crutch that so many foraging guides use today. “It’s like a copout of preparation,” she says. So the cookbook she and LeRoux have just completed is not your grandfather’s copy of Stalking the Wild Asparagus. These recipes go way beyond boring blanching.

For the book, they decided to cover only the most delectable of Wong’s lineup and the most exquisite of Leroux’s recipes for each. Some dishes—like a dandelion flower tempura or a wild herb ravioli—took him up to three years to refine. The resultant 88 recipes are delicious enough for Daniel, yet simple enough that even Wong’s ninth grader could pull them off in the kitchen.

Many of the 72 plants in the book can be gathered without a trip to Hunterdon County—they’re abundant in New York City parks, vacant lots and even sidewalks, though Wong recommends planting or buying, rather than picking, what she calls “Code Red” species, including pawpaw and bee balm, that are rare or grow only in specialized niches. Plus picking in parks requires permission. She’s currently working on a guide especially aimed at helping New Yorkers navigate these obstacles, and Foraged Flavor has detailed instructions and photos for identifying each of her favorite edible specimens.

Leroux’s lunch features Wong’s living pantry with the likes of smoked salmon with wood sorrel, hyssop with prosciutto, pokeweed-chickweed frittata and ground ivy chocolate sponge cake. The crew is hungry from the harvest romp, and it’s all gone faster than a swamp violet could wilt.

Wong’s come a long way from her childhood gathering mulberries and dandelions. Today she knows not only the Latin names of the more than 200 wild plants growing on her property, but how they taste in an infusion, demi-glace or stew. She admits to obsessively pursuing the gastronomic identities of every petal, stem and nontoxic berry through books, nature talks and her own courageous sampling of new potentials. When asked about her old lawyerly life of boardrooms and deadlines, she makes a face as if she just tasted an unripe crabapple. She’s much happier working here, in her fields and swamps. “This is like my lab,” she says, “and it’s my own backyard.”

Anise hyssop grows wild in sunny spaces but you can also find it at Greenmarket stands including Keith’s Farm, Berried Treasures and Maxwell Farm. Don’t worry that this summer soup is not bright tomato red—it more than makes up for it in flavor.